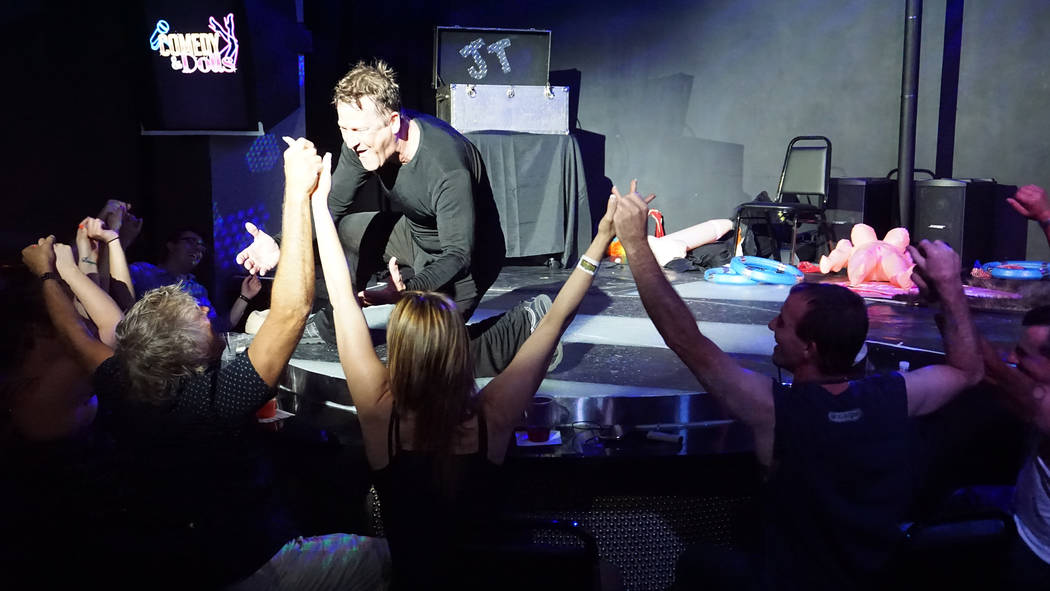 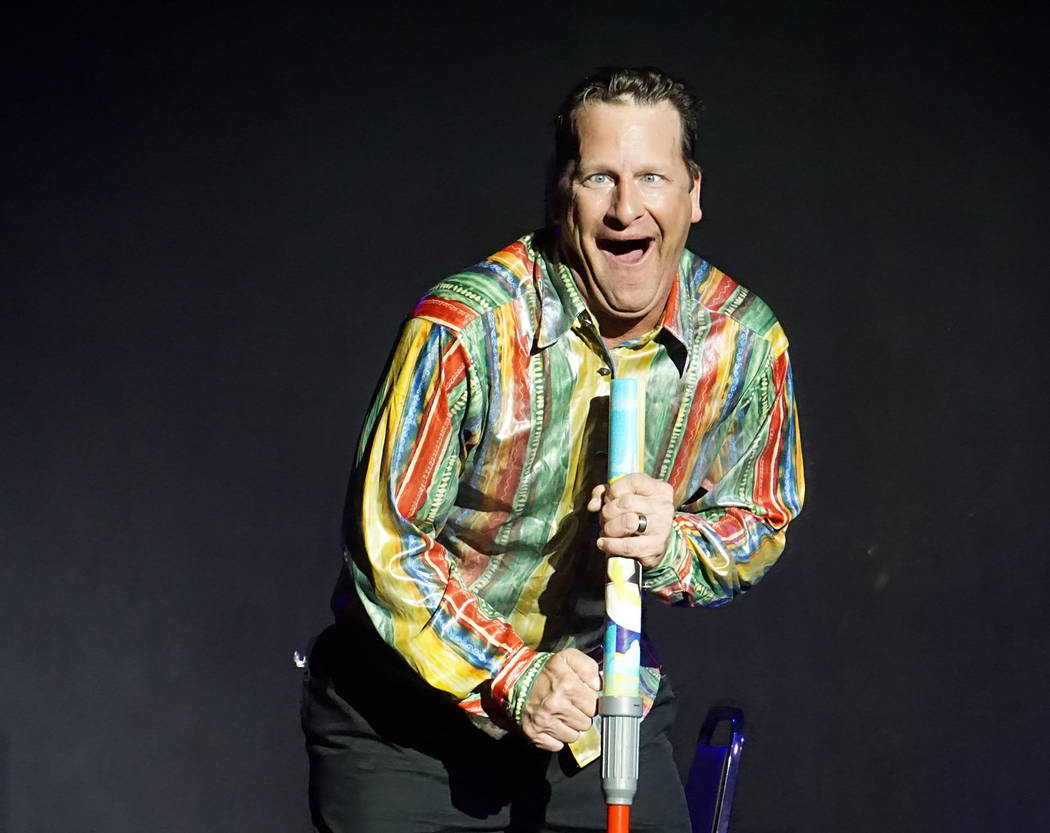 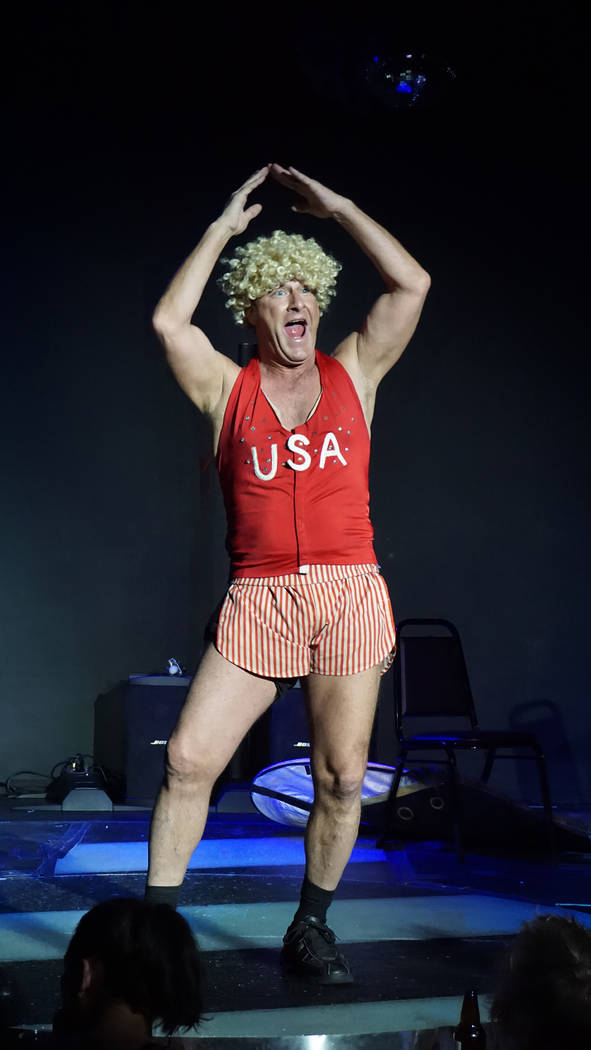 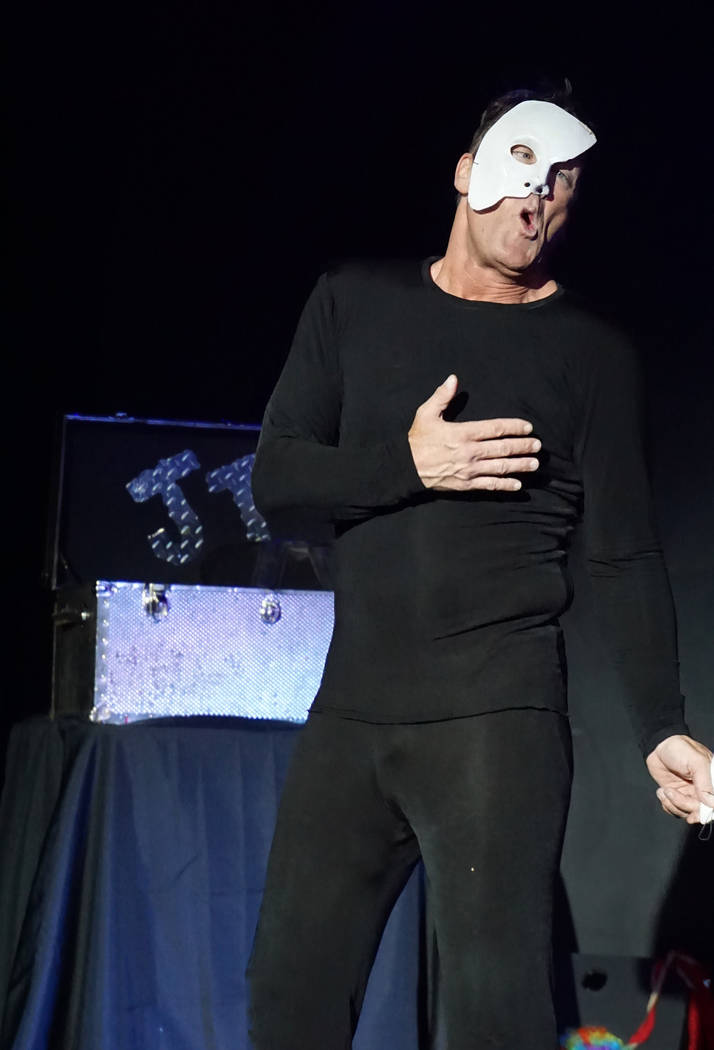 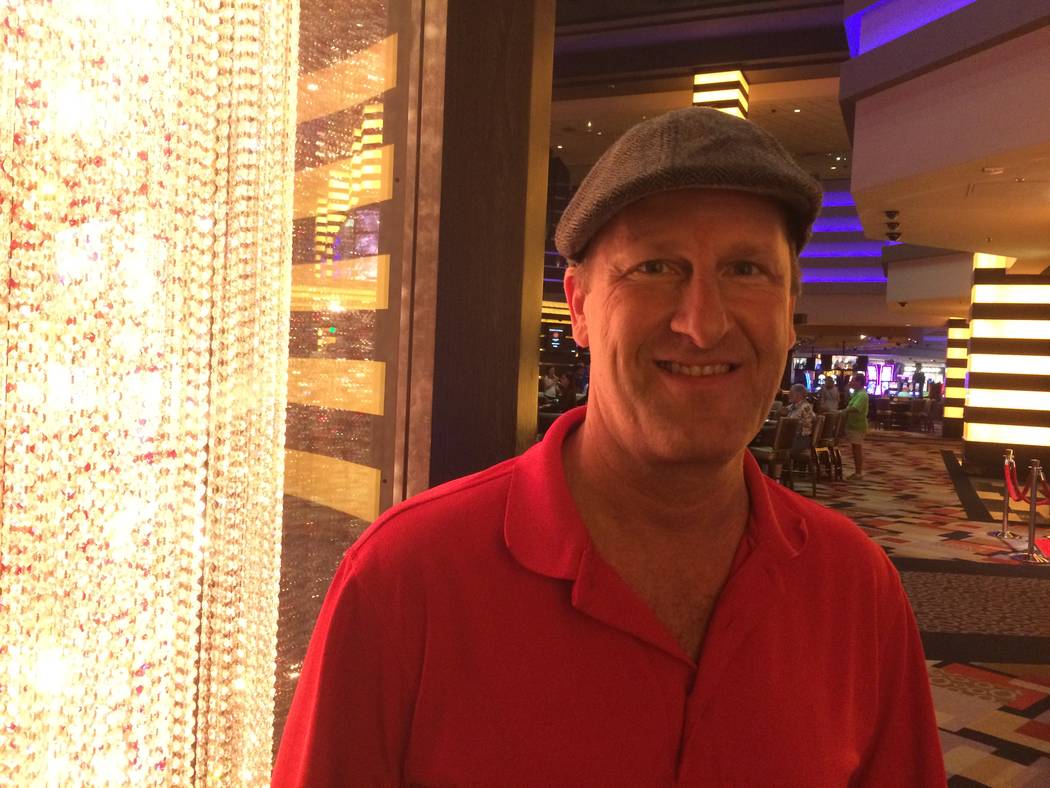 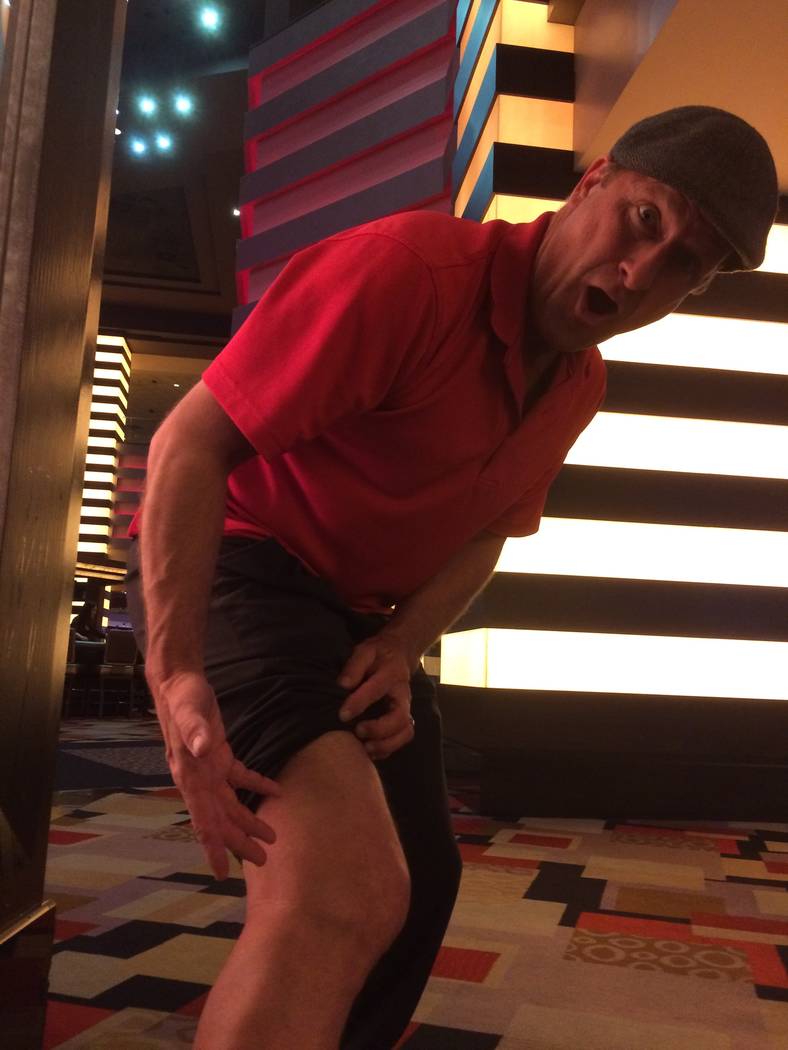 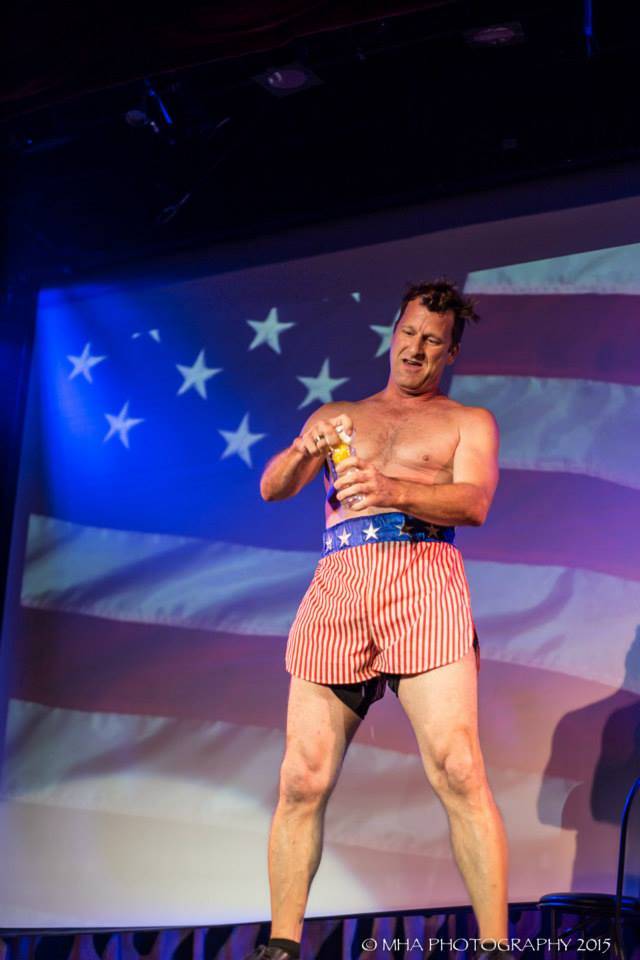 The scene was something “like a movie,” Joe Trammel says, but not one of the movies he made a living out of spoofing.

Trammel was “on crutches, knee-deep in snow” in Maine when he fielded a call from Las Vegas.

The producers of “Comedy & Dolls” were asking if he was ready to do his act again. Trammel had snapped his thigh bone in half in an October accident and was still in physical therapy when they asked if he might be ready to perform in a month.

Except that Trammel’s act was all about letting ’em see the sweat.

Trammel is one of those unsung Las Vegas stars you probably don’t know by name. But if you’ve attended a Las Vegas variety show in the past 25 years, there’s a statistically high chance you’ve seen him.

From “Splash” to “V — The Ultimate Variety Show,” Trammel was that guy who bombarded you with sight gags by dancing and doing quick costume transformations to snippets of music.

People go from “What the …?” to laughing at the juxtapositions, caving in to the silliness of it all and applauding the sheer effort of a guy who strips down to bikini briefs and displays more skin than many of his showgirl costars.

Comedian Nancy Ryan came up with a tagline in an “X Comedy” introduction: “The King of Pop Culture.” Anyone from Michael Jackson to Batman to “Riverdance” to “Phantom of the Opera” to Caitlyn Jenner can become punch lines for his prop comedy.

But one bit has been in the act since the earliest days: “Rocky.” “My favorite movie of all time,” Trammel says. In thousands of shows, he cracked and drank raw eggs, flaunted the patriotic shorts, did the one-arm push-ups.

Trammel’s career had underdog “Rocky” parallels as well. Getting back on stage now makes him feel more like Rocky Balboa than ever. “Just to get through the 15 rounds was winning, right? As long as you’re still standing.”

Trammel’s act makes sense if you know his background. His fluid movement comes from a mom who ran a Phoenix-area dance studio. When break dancing became a fad in 1984, the teen Joe declared himself an expert and started teaching break-dance classes at Trammel Dance Studio.

“I didn’t even know how to do all of it yet,” he says with a laugh.

When lip-sync contests became a thing in bars, Trammel would fly to California just to win them. Most people just used one song. But Trammel already was cutting and splicing for comic effect.

Finally, he learned how to work his pliable, silent-movie comedy face from a veteran vaudeville team while dancing in the “Sugar Daddies” revue in Reno while still a high-school student in 1986.

Trammel made his Las Vegas debut in “Splash” in the early ’90s. By 2002, he was so busy, he had two sets of props. He would do the early “V” show, jump in his car, drive to the Riviera to do “Crazy Girls” and then drive back to The Venetian for the second “V.”

In 2005, he got a taste of national exposure on the E! reality contest “The Entertainer,” where Wayne Newton was an “Apprentice”-style mentor.

Through all this, “I never went on vacations. Even when I switched shows, it was never like I had a month off.” The Vegas life caught up to him. “I burned out a little bit. I needed a break,” he says of retreating to Maine with his wife, Jessica, in 2013. He realized, “It really helped me grow.”

But on Oct. 8, he did a one-off show in an Auburn nightclub. “Great show, great night, energy’s pumpin’. I jumped off the stage and start dancing with my wife.

“She did one of those ballroom-dance straddle things,” leaping up on him. “We’ve done it a million times, and she weighs all of 95 pounds.” But this time, “when she jumped up, there was a puddle. Somebody had spilled a drink or something.” When he stepped back to catch her, he stepped right into it. “My leg literally just snapped in half. It just snapped like a twig.”

When “Comedy & Dolls” producer Pete Housley called, Trammel again channeled his movie hero: “It was like a bell went off. I almost felt like Rocky. ‘We’re gonna do this.’ ”

Doctors told him it was irresponsible, maybe impossible, and that he needed a full year. But he also saw “Bleed for This,” about boxer Vinny Paz’s recovery from a broken neck. “If he can do that, I can do this. I just started recovering quicker and quicker.”

He started writing a memoir while he was laid up, just to give him something to focus on. “I started thinking, ‘I need an ending to this book.’ ”

He figured, “I’m either going to fall off the stage or it’s going to be a success.” Though he still walks with a limp and sometimes with a cane, he’s done the show for two weeks without falling. “Now I feel like I got the ending,” he says.