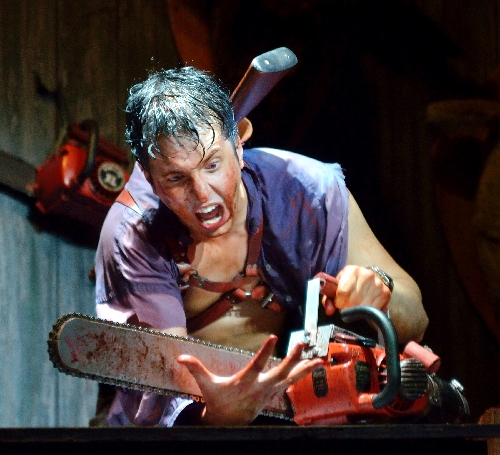 Bruce Campbell gets a cut of this thing, right?

The audience at “Evil Dead: The Musical” may or may not have been at the V Theater to get squirted with blood in this one-of-a-kind offering, a campy musical descendant of “The Rocky Horror Show.”

But they sure were there for the catchphrases.

Or to hoist the shotgun aloft and decree … wait for it, because you will have to be patient … “This is my boom-stick!”

Campbell’s edge-of-sanity cool in the movies also informs Stobber’s version of Ash and his owning the stage show. He is the only person onstage who gets to pretend he is really in a story about his friends getting taken over by evil spirits and trying to kill him, instead of clowning directly to the audience.

The whole thing is a deliberate exercise in bad taste and over-the-topness, so you can’t say there’s a right or wrong way of doing it. You could even argue that by allowing Stobber his own little pocket of reality, the other actors are giving him his own frequency, more room to resonate.

Either way, you can see the difference in the scenes between Stobber and Nicole Unger, his second-act damsel in distress. He’s playing to her while she’s playing to the crowd.

But that’s what they call a “4-D experience.” And for the most part, the sense of camaraderie created in the theater overrides what I would call “The Cannonball Run” effect. (A dated reference, I know, yet it came out only two years before “The Evil Dead”: Burt Reynolds and Dom DeLuise knowing the outtakes at the end were better than any movie they were making, and expecting you to have as much fun as they did.)

Let’s just say a crowd bonds when a guy (Brian “Mickey” Roark), sporting a phallic appendage that is supposed to be his character’s intestine, walks the stage ejaculating stage blood from his gripped fist, making sure he gets to every lucky patron in the “splatter zone.”

“Anybody get anything in their drink?” Roark asks patrons during intermission. “How’s it taste? I put a bunch of vodka in some of it.”

This is “Rocky Horror” in the Twitter era. Early in its life, “Rocky” once was a musical people simply sat and watched. “Evil Dead” skips that phase of evolution and cuts to the chase, making fans instantly part of the party.

Given these priorities, the formalities can get short shrift. Some of the songs seem to be performed out of obligation, their lyrics hard to discern in the blend of recorded backing tracks.

Still, this musical by George Reinblatt with songs by Frank Cipolla and Melissa Morris – which launched in Toronto in 2003 and played off-Broadway three years later – often works even when the fourth wall is up.

The self-aware tunes occasionally get their moment in the sun, most memorably when Matthew Antonizick sings of being a “Bit Part Demon,” that dude in every horror flick who gets dispatched too quickly to be a threat.

Director Sirc Michaels and most of the cast staged the musical twice off-Strip before moving into the V Theater, so there’s a strong ensemble rapport.

The jokes and plot pull from all three of Raimi’s movies (there’s even a line about Raimi’s “Spider-Man” movie being “poorly directed”), but the tone comes mostly from the Three Stooges slapstick of “Evil Dead 2: Dead By Dawn.”

A group of young archetypes head up to a cabin in the woods, where they discover a Book of the Dead and unleash demons who are indeed evil, but not without a sense of humor. Most of it is cheap raunch, but a couple of Grand Guignol gross-outs do get close to the movies’ “Did they just do that?” shock effect.

Michaels does a good job of making a show with complicated cues seem as though it requires no effort at all. Given my “Cannonball” hang-ups, I wish he would tell some of the actors the material is so ridiculous, it would actually be funnier if they dialed it down , instead of trying to punch it so much.

But Stobber’s transformation from meek S-Mart clerk to ripped-shirt, blood-soaked, chain saw-arm wiseguy? Somewhere, Campbell is smiling. And that’s really the only opinion that counts.