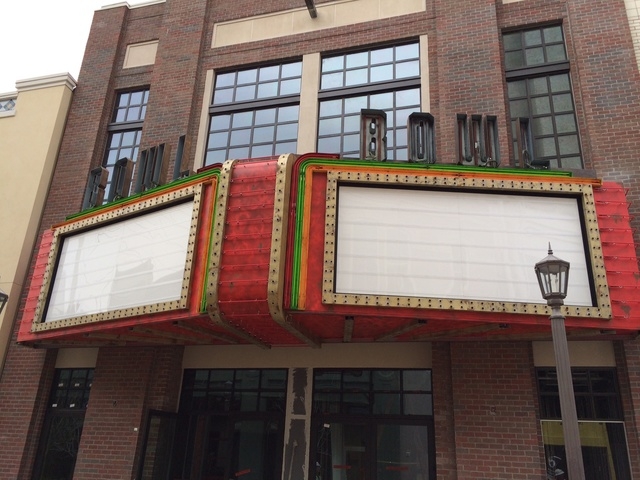 A sixth thing to know: Yesco built this new marquee above the door of the Brooklyn Bowl to look like it's been there a long time. Making it look old took longer to make than one that looked new. (Courtesy)

A walk-through of the new music club, due to open March 8 at The Linq (between the Flamingo and The Quad), reveals a few things about the 78,000 square-foot complex’s plan to be more club, less concert hall.

1. Walk-ins welcome. There are a lot of venues in Las Vegas, so one point of distinction will be to book fewer “event” or “advance planning” headliners — where most tickets would be snapped up as soon as they went on sale (though Primus and Jane’s Addiction in May qualify on those counts) — and more jam or party bands — such as Galactic or Ivan Neville’s Dumpsthaphunk — that should encourage spontaneous walk-ups from the new faux Bourbon Street that is The Linq.

2. Wear sensible shoes, Part 1. All of the shows booked so far are general admission standing, no comedians or old-guy sit-downs. And the only seating is in up-sell areas. One is just to the side of the stage and includes bowling-lane access, and the other is in a portion of the mezzanine.

3. Wear sensible shoes, Part 2. Sometimes, the stage will turn over but the audience doesn’t have to. There will be nights with separately ticketed shows booked early and late, but the Bowl doesn’t plan to clear the house between them. So you bargain players can maximize nights such as March 20-22, when Cake is followed by Karl Denson’s Tiny Universe. As long as you’re not trying to balance on those stripper stilettos for five hours.

4. All the beer is on tap. But it’s all the good, nichey stuff. No swill. And even though there’s a designated restaurant area, you can order food in the bar areas too.

5. Fear not, you can bowl during the show if you must. There are 32 lanes, 16 on each level, and they are set off to the side of the concert area. The only times the lanes ever closed at the original Brooklyn location was when Paul McCartney played and Bill Clinton spoke.