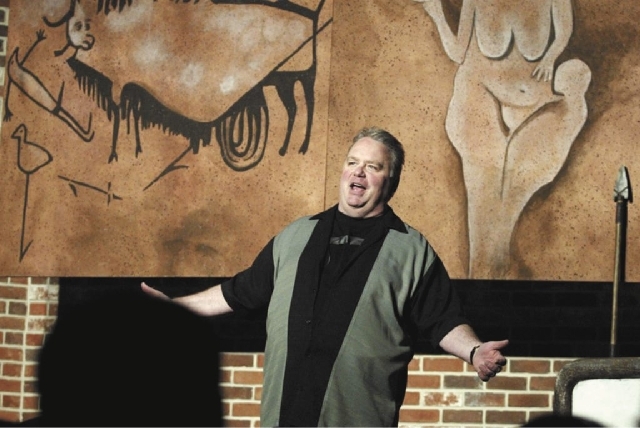 Kevin Burke, shown here in a 2011 photo, has performed "Defending the Caveman" more than any other actor in the show's history, according to producers.

It’s obvious any night on the Strip, and especially the week before “The Hangover Part III” opens, that “Vegas has become kind of the test audience for the new generation of Cavemen.”

But I had to give away the capitalization in print, so you can guess that director Isaac Lamb is talking about actors who perform “Defending the Caveman,” not the guys hanging around Dick’s Last Resort on a Saturday night.

Lamb was overseeing this week’s handoff of the one-man show from Kevin Burke, who hung up his spear after more than 3,000 performances, to new actor Chris Allen.

The producers say Burke has performed “Caveman” more than any other actor in the show’s history, including Rob Becker, the guy who wrote it and performed it on Broadway.

Burke was given a big sendoff from fellow entertainers on Monday, but the very next day Allen stepped in with the help of Lamb, a former “Caveman” himself.

Lamb says the Harrah’s Las Vegas edition of the comedy has been “the most prominent and the most visible ‘Caveman’ production in America for a couple of years now. … to me it really is the identity of ‘Defending the Caveman’ in the United States.”

Allen is noticeably younger than Burke, as are “most of the guys performing it now,” so changes being introduced in this week’s transition will make their way into the permanent “bible” for the show, Lamb says.

The new version doesn’t change Becker’s fundamental premise of using real anthropology for a comic look at why men and women behave the way they do. But the supporting evidence had to be dragged into the personal electronics era, working in text messaging and “how the hunting and gathering elements have continued to emerge in the new technology of the day,” he says.

“Because of its universality, it adapts itself well to the changes of coming generations,” Lamb adds. “It’s the kind of stuff we’ve been talking about for years, men and women being different and not able to communicate or figure each other out. The Greeks were writing plays about that.”

By the way, if you worry about Lamb’s skills as a director, go to YouTube and join more than 424,000 people who have viewed his “live lip-dub” marriage proposal. …

Stage magic is seldom, well, magical, but maybe there was only one logical explanation for a Criss Angel TV illusion not working out last week. “He had bad karma that night,” says Jan Rouven, the Riviera magician who says Angel lifted his “Bed of Death” illusion.

Rouven went down to Fremont Street last week to observe the illusion Angel says was conceived by author Clive Barker for his movie “Lord of Illusions.” Beyond Barker’s basic premise of a magician threatened by falling swords (spoiler alert: in the movie, it’s a failed escape and the magician dies), the illusion turned out to be nearly identical to what Rouven performs at the Riviera.

“The person (from the audience) chooses the order (of the falling swords) and that was not in the movie,” Rouven says.

But when it came time for Angel to release the last sword that would have pierced his heart, the sword refused to budge. Nothing that can’t be fixed in editing when Angel’s new series “BeLIEve” airs on Spike next fall, but a bit of an embarrassment in front of a live audience on Fremont Street.

“That was bad enough,” Rouven says of not further pursuing the issue. “The facts are very clear. We let other people judge.”

“I go out of my way to get people’s permission,” Angel said. “I deal with this on a much larger level than any of these people. … Do you think I would really need to do something like that?”