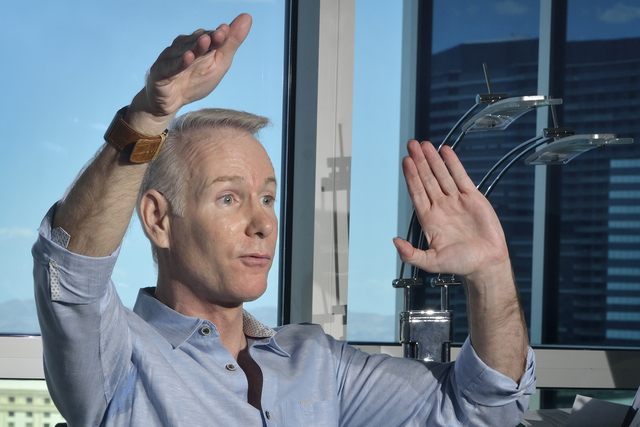 Richard Oberacker is shown during a rehearsal at his home in Aug. 3, 2015. (Bill Hughes/Las Vegas Review-Journal) 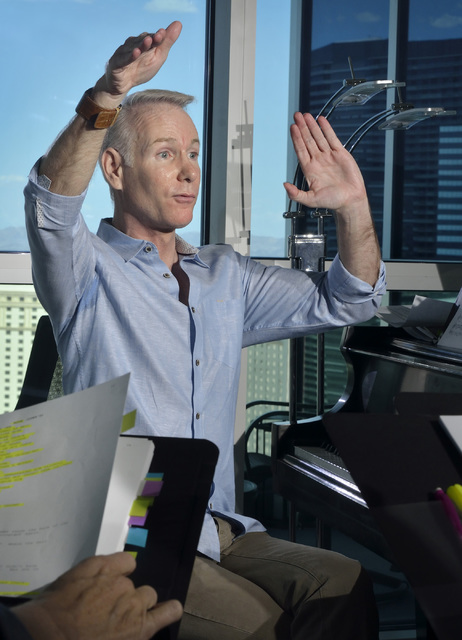 "Ka" conductor Richard Oberacker wrote the music and shares book and lyrics credits with Robert Taylor for “Bandstand,” which will debut on Broadway in April. (Bill Hughes/Las Vegas Review-Journal)

Maybe it’s not all that ironic, but it’s definitely cool.

Cirque du Soleil jumped into the Broadway game this year with the acrobatic musical “Paramour.” Next spring (assuming it continues to perform solidly), that title will compete alongside a new traditional musical called “Bandstand,” by the guy who conducts “Ka” for Cirque every night.

Richard Oberacker wrote the music and shares book and lyrics credits with Robert Taylor for “Bandstand,” which opens April 26 at a Shubert theater to be announced. (On Broadway, the next show is always in the on-deck circle, but current shows get the courtesy to announce their own closings.)

The story of World War II vets who enter a radio contest for swing bands will be helmed by “Hamilton” choroegrapher Andy Blankenbuehler. It will co-star Laura Osnes, whom Broadway buffs know from the “Cinderella” revival.

If none of this seems much like a Las Vegas story, try telling that to Osnes.

She came to town last December as a Cabaret Jazz headliner at The Smith Center for the Performing Arts. The same stage where Oberacker had field-tested some of the “Bandstand” songs in the Composer’s Showcase, where local performers network to do just that sort of thing.

“I had sent her an email: ‘Hey, you’re actually going to be playing on the stage where “Bandstand’s” score first saw the light of day,’ ” Oberacker recalls.

The next morning, the two met for coffee. “And she sits down and says, ‘You did not warn me what a response this community has for this material, and how connected they are to it.’ ”

And it was the Cockroach Theatre in downtown’s arts district that hosted the first read-through of the full work.

And the response? “It was electric,” Oberacker says. “If you talk to anybody who was in that room … that was when we knew we really had something on our hands.”

“Bandstand” went on to workshop at Lincoln Center, which led to a fully produced version at the Paper Mill Playhouse in New Jersey last October.

It’s another near irony that “Bandstand” beats another new musical, “Idaho,” to the Great White Way. “Idaho” had the parallel story of a composer subsidized by standing work on the Strip — Keith Thompson conducting “Jersey Boys” — but also one of its test runs here at The Smith Center.

“Living out here, I think we actually rely on one another,” Oberacker says of the creative community. “It’s not competition; it’s like a brotherhood, like a bonding.”

But “Jersey Boys” closed. And “Million Dollar Quartet,” “Rock of Ages” and Steve Wynn’s “ShowStoppers” are now set to. Those losses could be offset by at least one rumored Broadway hit coming to roost, “Beautiful — The Carole King Musical.”

But for now at least, this creative community is threatened. At least there is still Cirque to encourage its current and former cast members to put down Las Vegas roots and launch new endeavors.

Did “Bandstand” surprise Cirque? With three credited composers on “Paramour,” were they oblivious to a Broadway talent right under their noses, serving as nightly custodian for the cinematic “Ka” score of another composer (Rene Dupere)?

Not at all. Jerry Nadal, who oversees Cirque’s Las Vegas shows, was in on the secret from the earliest readings and has been “nothing but a massive cheerleader,” Oberacker says.

“They trust me to have this balance … this life outside,” he says of working for Cirque since 1999.

His Cirque ties lead back to another irony: “Bandstand” is an original work, which is now kind of rare amid Broadway’s craze for adapting movies or familiar brands. But Oberacker simply didn’t have time to go out and try to chase down the rights to a comic book.

“I’ve very loyal to this company, and what it’s meant is that my writing’s always come second,” he says. “I can only write what I write, and then it’s out of my hands.”