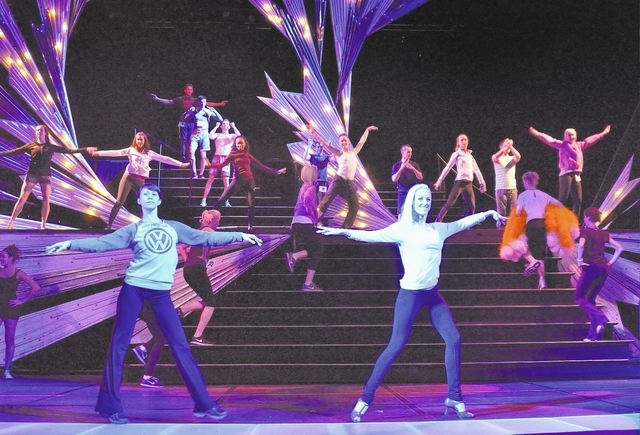 Cast members from "Jubilee!" dance during a rehearsal at the Jubilee Theater in Bally's hotel-casino at 3645 Las Vegas Blvd., South, in Las Vegas on Thursday, March 6, 2014. (Bill Hughes/Las Vegas Review-Journal)

“It has become clear that additional work is needed to deliver the unforgettable experience our customers have come to expect from us.”

No, this is not the release that came from Caesars Entertainment about “Jubilee.” It’s the one that should have been sent.

Oddly enough, the announcement came from New York the week before “Jubilee” reopened. It came from the producers of “Hearts and Lights,” a $25 million Rockettes revue intended to become a spring attraction at Radio City Music Hall.

Now, New York tourists will have to wait until next year. The Madison Square Garden Company decided not to risk bad reviews or word of mouth on consumer websites by opening a product that was said to have a weak connecting storyline.

No such worries here. A half-baked relaunch of “Jubilee,” the 32-year-old showgirl revue, reopened March 29, the date promised in fancy invitations with fold-out puffy fabric that cost $5.80 each to mail.

Caesars Entertainment was either incredibly overconfident about the work of Frank Gatson Jr., the guy they trusted the show to — unlikely, as Gatson himself wasn’t declaring the show perfect that night — or more worried about how many weeks it was paying the cast and crew without any ticket sales.

If “You never get a second chance to make a first impression” was the first hard lesson learned here on the Strip, here are four more.

2. When you’re in a hole, stop digging. “Jubilee” was offline for six weeks, about the same amount of time as Cirque du Soleil’s “Zarkana.” Cirque seemed more realistic about what could be done in a limited time. “Zarkana” did improve by degrees, but Cirque hasn’t gone overboard marketing it as a substantially different product.

By contrast, Gatson was said to have been still adding or replacing new material right up to the official VIP night.

3. Maybe it’s time to hand this thing off to an outside producer. “Jubilee” is the rare hotel-owned show. There might be too many cooks in the kitchen, yet no one passionately protective of it, swimming or sinking by the creative decisions.

4. It’s easier when there is a star at the center of attention. Gatson is Beyonce’s longtime creative director. Similarly, Jamie King staged tours for Madonna and Britney Spears before delivering the lamentable “Storm” at Mandalay Bay in 2001.

King went on to co-direct the respectable “Michael Jackson One,” demonstrating what a difference experience and a strong creative team around you can make.

5. This thing really is one of a kind. The Rockettes show was apparently trying to land somewhere between a Broadway musical with a story and an old-school variety revue. The connecting material was by Pulitzer Prize-winner Doug Wright.

I doubt anyone will claim credit for the crazy “lost showgirl” narration of the new “Jubilee.” But the confusing end product shows just how challenging it is to make new material blend into a familiar show and create a new context for all of it.

There really aren’t any more “showgirl spectaculars” on this scale to point to and say, “Ah, there’s how you do it.” Hopefully it’s not too late to save this one.