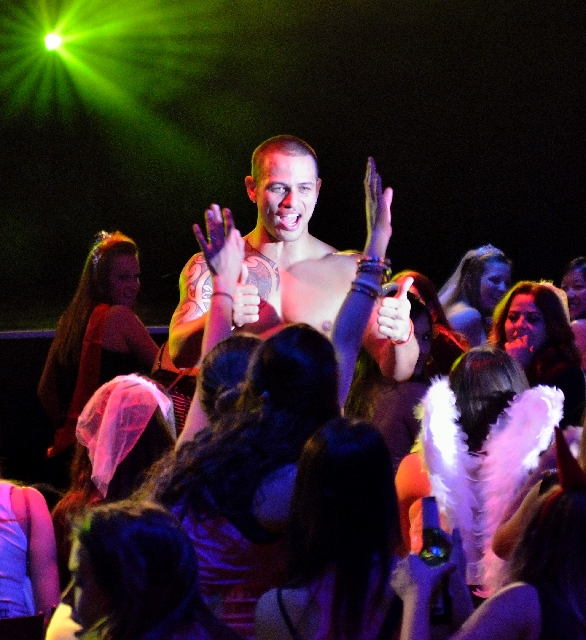 Aidan Tepukei interacts with the mostly female audience at the “Thunder From Down Under” show at the Excalibur.

Where do Australia and Canada meet?

Right at the crotch, of course.

“Thunder From Down Under” emcee Marcus Deegan asked for it though, in the part of the show where three ladies are ushered to the stage for the fake orgasm contest.

The first two contestants from Montana and Mexico didn’t make anyone forget Meg Ryan in “When Harry Met Sally.” But the third one from Toronto — Davine or Divine or something like that — looked like ’80s-era Tina Turner, only taller, standing out from — and above — the shrieking room full of high heels, little black dresses and cutesy bachelorette crowns and sashes.

Deegan knew he would have what she was having and invited Davine/Divine to “use my body as a prop” if she wanted.

Sure enough, her fine vocal performance was the no-contest winner, even without the accent mark of clutching a solid handful of Deegan’s crotch as she screamed.

But what really makes “Thunder” live up to the distinction of its Australian pedigree? The polite manner in which Deegan said in his charming accent, “Thank you very much for that, by the way.”

“Thunder” may never catch the Chippendales in terms of worldwide brand recognition, but it has worked hard to level the Las Vegas playing field. It has its own brand history on the Strip, first turning up in 1993. The Aussie lads have called the Excalibur home since 2002, three years before the Chips raised the game with their custom theater at the Rio.

Deegan has been the emcee since the troupe first set up permanent shop in 2001, proclaiming every night since then, “There are two things you’ll never see in here: your husbands and your friggin’ boyfriends!”

“Thunder” producer Adam Steck has played catch-up in the past two years, using a long-term commitment from the Excalibur to spruce up and feminize the one-time restaurant. A bordello red makeover extends from a chandelier in the lobby to convenient hooks for hanging purses under the tables.

More to the action, the stage is “sprung” to absorb impact and outfitted with two disguised trampolines, allowing “Thunder” gods such as David Harris to back-flip his way across the stage, and even off the front of it.

The room still has structural limitations that will never let it match the Chippendales for theatrical production value. But they make that work, too, with a down ’n’ dirty immediacy that lets the low ceiling and harsh lighting further a sweaty backroom vibe.

The production has been punched up over the years, from the four ladders toted by the “Sydney Fire Department” to the black and white film of a ’50s-era housewife introducing Aidan Tepukei’s turn as a friendly milkman.

But none of that matches the frenzy of Matthew Mardell out in the midst of the crowd, dousing himself with the contents of a bottle, then hopping the red railing, running across it and jumping off, shaking like a wet dog as he lands.

I’m always reminded of how the male G-string revues are louder and more of a contact sport than topless-women counterparts such as “X Burlesque” or “Fantasy.” Steven Berry is man enough for two women. He parks them in chairs and dances between them, offering one cheek for each of them to grab at the end.

You still want to question that Superman emblem tattooed on his bicep? He forges into the crowd, scoops up a smaller female and carries her to the stage, puts her on all fours and then flips her onto his lap with a move so fast you’d need instant replay to see it.

But this is as live as a Vegas show gets, a what-happens-here ritual you can’t find on the Internet. Except for the photos they are happy to sell you at the end of course, to post later.