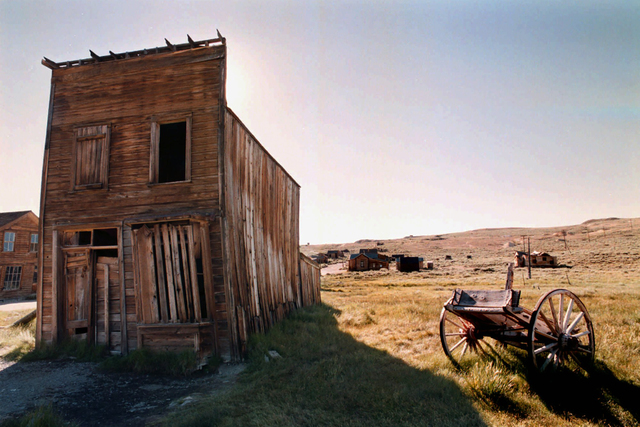 Bodie, a ghost town near Mono Lake in eastern California, preserves the remnants of an 1880s boomtown in a state of “arrested decay” as a California State Historic Park.

About 200,000 visitors a year take a fascinating excursion into yesteryear in Bodie, which is listed on the National Register of Historic Places. The nonprofit Bodie Foundation oversees the park.

Located off scenic U.S. Highway 395, Bodie is reached by a 13-mile, mostly paved drive on California Route 270. The turnoff is north of Mono Lake and seven miles south of Bridgeport. Paved for the first 10 miles, this road continues on a three-mile unpaved section to the parking area overlooking the old gold mining town. An easy walk leads visitors past about 100 weathered buildings lining a few streets near mine structures and an adjacent mill site.

Although Bodie is open year-round, its remote location east of the mighty Sierra Nevada peaks and its 8,400-foot elevation generally guarantee brutal winters. Many winter visitors arrive on snowmobiles, since the road is often closed to most other vehicles. When spring finally arrives, the unpaved portion of the road is often treacherous with mud. The few months between spring snowmelt and the return of snow in late autumn are Bodie’s best season.

The park observes longer summer hours (9 a.m. to 6 p.m.) from mid-March to October 31. Winter hours (9 a.m. to 4 p.m.) are in effect from Nov. 1 to mid-March. Even in summer, visitors should bring a light jacket. Pack a picnic and snacks, as none are available in Bodie. Sturdy footwear, sunblock and bug spray are also advised.

Visitor facilities are minimal in the ghost town. Flush toilets are available at the parking lot and near a few tables in the little picnic area downtown, where there is also drinking water. The old miners’ union hall, once a gathering spot for community events, serves as a visitor center with a gift shop and historic exhibits. Inquire there about self-guided tours, scheduled programs and guided tours of the town and mill. Mill tours are available through Sept. 8 at 11 a.m., 1 p.m. and 3 p.m. for $6 per person. Tour size is restricted to 25 participants. After September, inquire about tour availability in the visitor center.

Special events planned in August include “Friends of Bodie Day” on Aug. 13. The ghost town will be festive with Bodie Foundation members in period costumes, arts and crafts booths, food vendors, music, living history programs, tours and a mule team demonstration. On Aug. 27, the park will be open until 10 p.m. for the Bodie Ghost Walk and Star Stories. The Ghost Walk starts at 6:30 p.m. for $35 per person. A 50-minute tour of the Standard Company’s nine-stamp mill at 8 p.m. costs $20. The Star Stories session with an astronomer at 8:30 p.m. is free. Obtain tickets at bodie.com or by calling 760-647-6564.

Bodie took its name (though it wound up spelled differently) from William Bodey, who discovered gold there in 1859 and died during a winter storm the following year.

Bodey made his find about the same time as silver was discovered at Virginia City and nearby Aurora. But Bodie was a late boomer.

It wasn’t until new discoveries in 1877 that Bodie took off and thousands flocked to the site. It soon had 65 saloons, a red-light district and opium dens — along with brawls, robberies and murders.

In 1881, the narrow-gauge Bodie Railway and Lumber Company arrived, lasting until 1917. The last mine closed in 1942. By 1943, only three people lived in Bodie, including a caretaker who repaired and protected the town’s remaining buildings. It became a California state historic park in 1962.