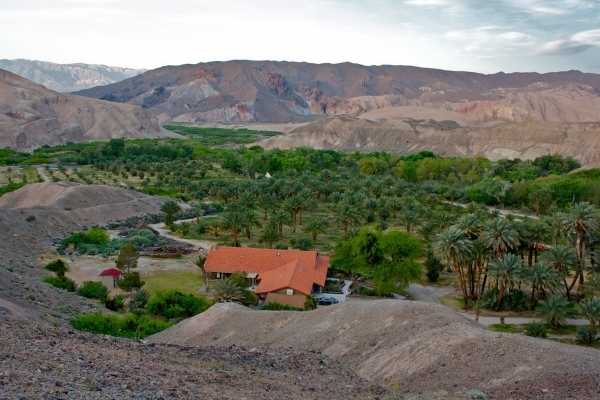 China Ranch Date Farm near Death Valley is a popular cool-season destination with wide-ranging appeal. Located in a secluded California desert canyon, this hidden oasis is lush with groves of various date palms, stands of cottonwoods and thickets of vegetation. Visitors follow a twisting road between high, chalky cliffs to park near a gift shop, snack bar, landscaping nursery, date processing sheds, a one-room museum and miles of hiking trails.

China Ranch lies about 90 miles from Las Vegas near the California communities of Tecopa and Shoshone just off a major route to Death Valley. To reach it, drive west on state Route 160, the road to Pahrump over Mountain Springs Pass. When it nears the mountains, the highway parallels part of the historic Old Spanish Trail, a rugged overland route from New Mexico to California established in 1830 by trader Antonio Armijo. Once over the mountains and down in Pahrump Valley, watch for the turnoff onto Tecopa Highway, which becomes the Old Spanish Trail Highway at the California border.

The road twists over rugged foothills on its approach to Tecopa, a resort area developed around natural hot springs, a lake and marshy wetlands. Look for Furnace Creek Road and turn left for a short paved route to the junction with unpaved China Ranch Road. The ranch road soon drops into a steep-walled canyon winding past several old mining ventures to the oasis.

The well-watered canyon has been cultivated since the late 1800s, when an enterprising Chinese man left behind his labors in the Death Valley borax mines to start a truck garden in the canyon. For several years he provided fresh vegetables, fruit, poultry and eggs to various mining camps in the area. His success drew the attention of a man named Morrison, who took over the farm in 1900, probably at gunpoint. The Chinese entrepreneur disappeared, his name lost to history, but the property has been known as China Ranch through several subsequent owners.

The first date palms were planted in the 1920s by a daughter of the pioneering Fairbanks family. In 1970, members of another regional pioneer family, the Browns, acquired the ranch and Brian and Bonnie Brown began expanding the date groves and improving facilities. Since it takes the palms many years to mature enough to produce dates, such expansion means a long-term investment of labor and planning. The date groves now include several varieties of palms, including a hybrid unique to China Ranch.

The hardworking couple have tackled many tasks, including construction of a four-bedroom family ranch house built of adobe bricks produced on-site, a five-year project that was completed in 1991. Brian Brown acquired the expertise needed for growing the palms, which yield hundreds of pounds of dates when mature. His wife, Bonnie, developed and tested ways to use the nutritious dates in various recipes, which she included in a date cookbook that can be purchased at the ranch. The couple remain involved in local efforts to promote tourism in this region where mining was once king.

China Ranch visitors get free samples of dates grown on the farm during a stop at the gift shop, which features baked goods made with dates and a snack bar with many choices, including delectable date shakes. The shop stocks a wide array of food items, books, souvenirs, toys, hand-crafted items and well-chosen collectibles. The nearby nursery offers palms, cactuses and native plants. A one-room museum provides glimpses of the past at China Ranch.

The ranch owners promote exploration of the area on foot and horseback. They have developed six hiking routes radiating from the ranch grounds into nearby canyons, along the Amargosa River and following the route of the historic Tonopah and Tidewater Railroad. China Ranch has become a hotspot for birders since the oasis draws at least 225 species of birds, as well as varied desert wildlife. It is a fascinating site that draws repeat visitors.