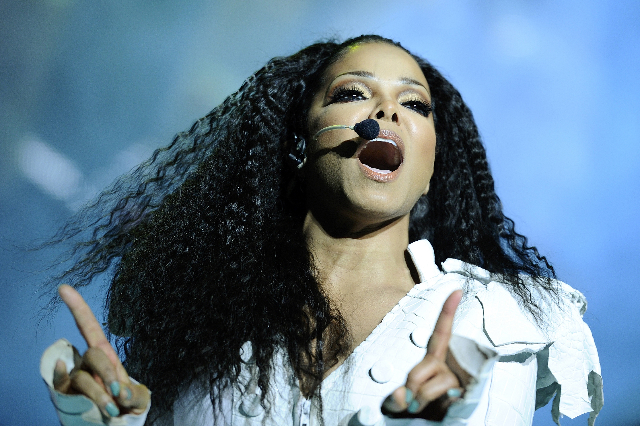 U.S. singer Janet Jackson performs on stage during her "Number Ones - Up Close and Personal" tour at the Royal Albert Hall in London June 30, 2011. REUTERS/Dylan Martinez (BRITAIN - Tags: ENTERTAINMENT) - RTR2OB1F

Janet Jackson is canceling two nights at Planet Hollywood’s Axis theater on Oct. 9 and 10 and instead will play one arena concert at the MGM Grand Garden on May 14.
The 49-year-old pop legend received “medical advice to rest her vocal chords,” according to the news release today. Jackson also bowed out of a planned appearance at the iHeart Radio Festival two weekends ago, citing an ear infection which prevented her from flying.
Since the new show will be in a different venue, ticket-holders cannot hold on to their tickets, but will have the first opportunity to buy tickets for the new date starting at 10 a.m. on Oct. 14, before the public onsale at 10 a.m. Oct. 16.
Presale passwords will be emailed to current ticketholders through Ticktmasters. Refunds must be obtained at the point of purchase, but tickets sold online through Ticketmaster will be automatically refunded.
The move is a rare case of a show jumping from one of the Strip’s two top casiner entities to the other. Concert promoter Live Nation is moving the show from a Caesars Entertainment property to own owned by MGM Resorts.
And the date offers evidence that at least some big-name concerts will continue to play the MGM Grand Garden even after the company’s new Las Vegas Arena opens in April.
Read more from Mike Weatherford at reviewjournal.com. Contact him @mweatherford@reviewjournal.com. Find him on Twitter: @Mikeweatherford