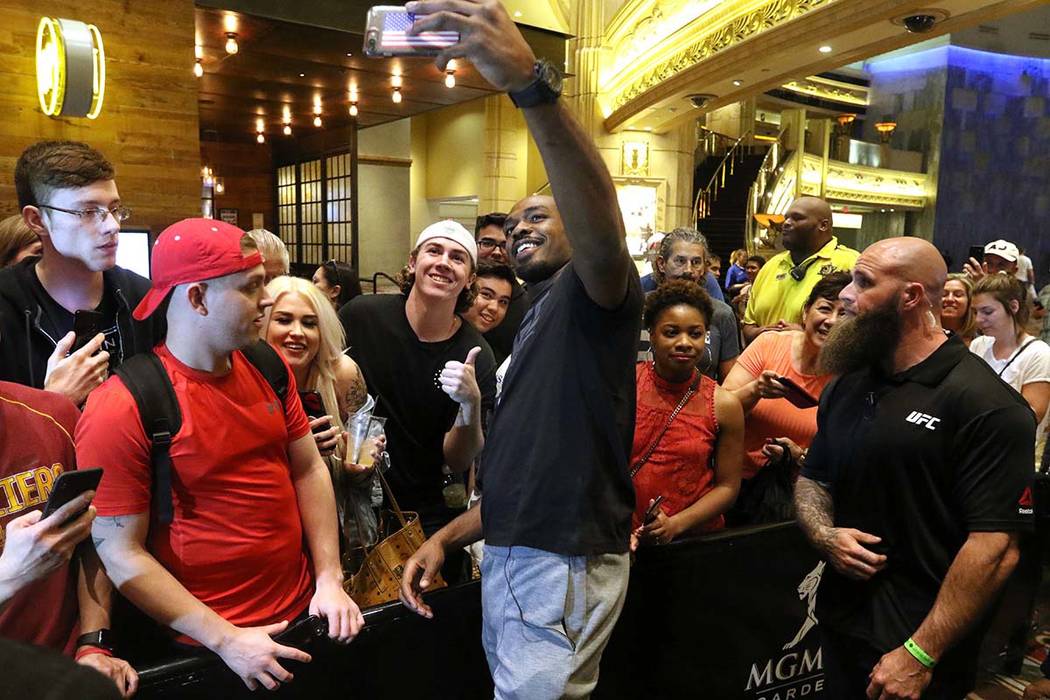 Before Jon Jones tangles with Thiago Santos on Saturday in UFC 239 at T-Mobile Arena, fans can spend two days mingling with some of their favorite mixed martial arts stars at the UFC Fan Experience. Fighters, UFC Hall of Famers and Octagon Girls will be at the all-ages event featuring autograph signings, meet-and-greets, podcasts and more, from 9 a.m. to 5 p.m. Friday and Saturday at the Downtown Las Vegas Events Center. Admission is free. Fans can sign up for the autograph sessions by downloading the UFC Fight Week app available on the Apple App and Google Play stores. For more information, visit ufcfightweek2019.com.

This weekend will see the debut of Silent Disco Sundays at Downtown Container Park, 707 Fremont St. The bimonthly event will offer guests the chance to tune out the world around them in favor of an in-headphone dance track of Top 40 and EDM, ’80s and ’90s throwbacks, or hip-hop and R&B from 5 to 9 p.m. The tunes will be provided by DJs OceanWolf, Rob Rickenbacker and Bad Antikz. The $5 headphone rental fee will be waived for the first 100 guests. (Note: A credit card is required for headphone rental.) For more information, visit downtowncontainerpark.com.

The group’s tunes frequently register as a fist to the jaw and/or a roundhouse kick upside one’s melon, so it’s only fitting that Godsmack is hitting town to headline the “Official UFC International Fight Week Concert.” The Boston rockers — or rawkas, in their native tongue — are touring in support of their confidently titled latest record, “When Legends Rise.” Beat the count with Godsmack at 10 p.m. Friday at The Joint at the Hard Rock Hotel. Tickets are $49.50 to $195; call 800-745-3000.

It’s spawned two sequels, a TV series and a holiday special. Now “Kung Fu Panda” is returning to theaters to entertain moviegoers who probably weren’t alive when it was released back in 2008. The animated comedy, featuring Jack Black as the voice of the titular martial arts fan, is playing as part of Cinemark’s Summer Movie Clubhouse. See it at 10 a.m. Monday through Thursday at Orleans, 10 a.m. Monday and Wednesday at Henderson’s Cinedome and 10 a.m. Wednesday at Sam’s Town and Suncoast. All screenings are $1.

Zuma at The Cosmopolitan of Las Vegas is celebrating Australian truffle season by featuring the fragrant fungi in three dishes. The Handcrafted Zuma Truffle is truffle-shaped mousse-filled chocolate, served with coffee-miso ice cream and shaved black truffle. Other options are a vegetarian rice hotpot and a grilled dry-aged tomahawk steak, both with black truffle. For reservations, call 1-877-893-2001.