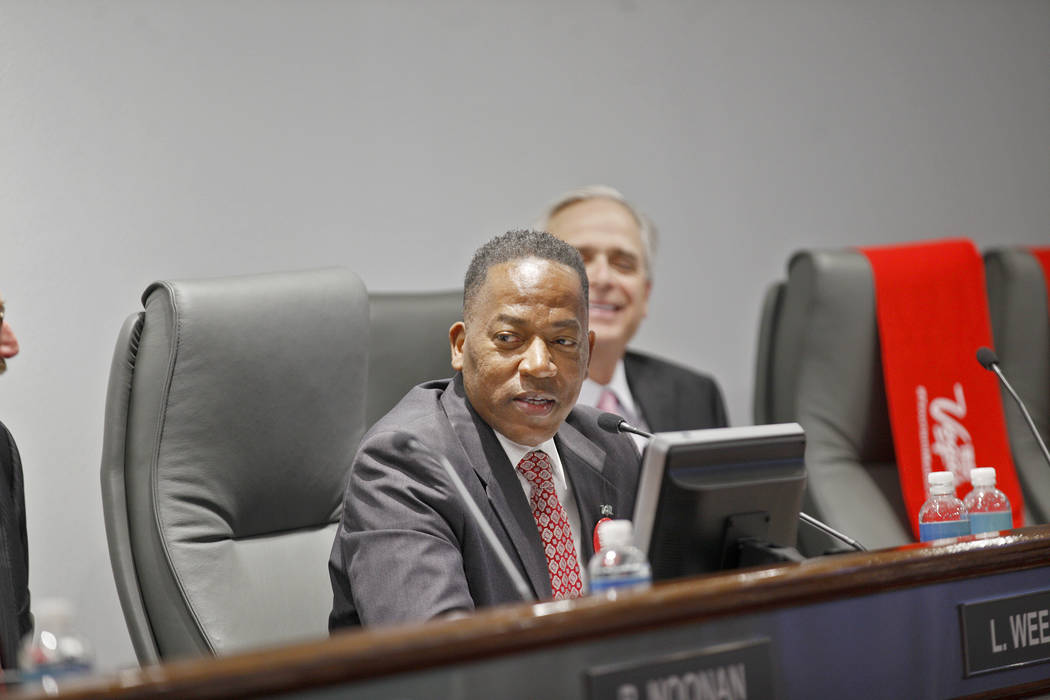 Lawrence Weekly, the former board chairman of the Las Vegas Convention and Visitors Authority, has agreed to pay nearly $2,400 in fines after violating the state ethics law for taking a personal trip with airline gift cards bought by the agency.

The Clark County commissioner acknowledged in a proposed agreement with the Nevada Ethics Commission that he abused his position of public trust at the tax-funded tourism agency for his own benefit.

Weekly traveled to Dallas with his daughter in July 2016, using $1,400 in Southwest Airlines gift cards.

The 10-page agreement describes his misconduct as “willful” and designed to “secure an unwarranted privilege or advantage for himself.”

It also says that he “did not adequately avoid the conflict of interest between his public duties and private interests” and that he should have been aware of his ethical responsibilities because of his long years of public service.

The ethics commission unanimously approved the agreement without discussion Wednesday at a meeting in Carson City.

“I’m over it,” said Weekly, who stepped down as board chairman earlier this month. “I just need to move on and take whatever responsibility is mine.”

But he added that he is not happy about having to admit that he willfully violated the law because he did not know at the time that the agency had bought the Southwest gift cards.

“I disagree with the willful part of it,” he said. “Willful of what? It’s unfair.”

Weekly maintained that he was in Dallas for convention authority business, but the agreement points out that agency staff viewed his trip as personal travel because he did not seek reimbursement for any costs.

The powerful convention authority has come under increasing scrutiny amid a Las Vegas Review-Journal investigation that found excessive misspending. The stories prompted an audit that uncovered secret purchases of Southwest Airlines gift cards used by staff for personal travel. Longtime authority CEO Rossi Ralenkotter also used nearly $17,000 in Southwest gift cards on personal trips for himself and his wife, the audit said. He retired in August amid an ongoing police investigation into the gift card scandal.

This is the first time Weekly’s name surfaced publicly in the commission’s secret five-month investigation into the convention authority’s misuse of $90,000 in gift cards.

Auditors have been unable to account for more than $50,000 of the cards, and Las Vegas police are focusing on allegations of theft.

The Review-Journal reported in September that Ralenkotter and former agency executive Brig Lawson were subjects of the ethics investigation. The commission has not announced any action against them.

Lawson, who resigned after the audit, hid the purchase of the cards and distributed them to employees within the convention authority between 2012 and 2017.

Ralenkotter apologized for using the airline gift cards on personal trips and repaid the agency for the cost of the tickets, saying he did not intend to commit any wrongdoing.

Auditors revealed the results of their inquiry at a board audit committee meeting last April. Weekly acknowledged at the meeting that Lawson arranged to use gift cards for the commissioner’s Dallas trip.

But the ethics agreement states that Weekly waited nearly two years until the day of the meeting to reimburse the authority $700 for his daughter’s expenses. He still has not paid back his half of the $1,400.

Weekly has agreed to pay a $1,000 fine for the ethics violation and another $1,398 penalty, which is twice the amount of his expenses, the proposed agreement says.

At the ethics commission meeting Wednesday, Judy Prutzman, the panel’s associate counsel, said the fines were not a maximum penalty because it was Weekly’s first offense and he publicly accepted responsibility for his actions. The commission had the option of fining Weekly up to $5,000 for a first offense.

In its original complaint in August, the commission alleged that Weekly and other convention authority board members and employees were among those who received marketing gifts stored in a large agency warehouse with lax controls. But a review panel concluded last month that there was not enough evidence to take any disciplinary action against Weekly.

The complaint did not provide any more information about the gifts, but it included a November 2017 Review-Journal story that found poor accounting at the warehouse.

The deal included a $53,000 separation agreement, a $132,000 performance bonus and a $270,000 post-retirement consulting contract that allows Ralenkotter to continue playing an intimate role in the agency’s worldwide marketing efforts. Ralenkotter also is getting at least $350,000 per year in state pension benefits.

Convention authority officials discovered the existence of the cards in January 2017 but did not inform the board until more than a year later after they learned about Ralenkotter’s personal use of the cards. The audit was ordered in February by board member Bill Noonan, who chairs the audit committee.

The newspaper also found Las Vegas Convention Center security officers were directed to leave their posts to chauffeur Ralenkotter to events, even though he received a $9,000 annual vehicle allowance. The investigation also discovered that authority warehouse staff gave away thousands of dollars in iPads, Bose speakers and other gifts intended to promote tourism without noting the recipient or business purpose. Warehouse staff also provided about $6,000 in gift baskets to Ralenkotter.