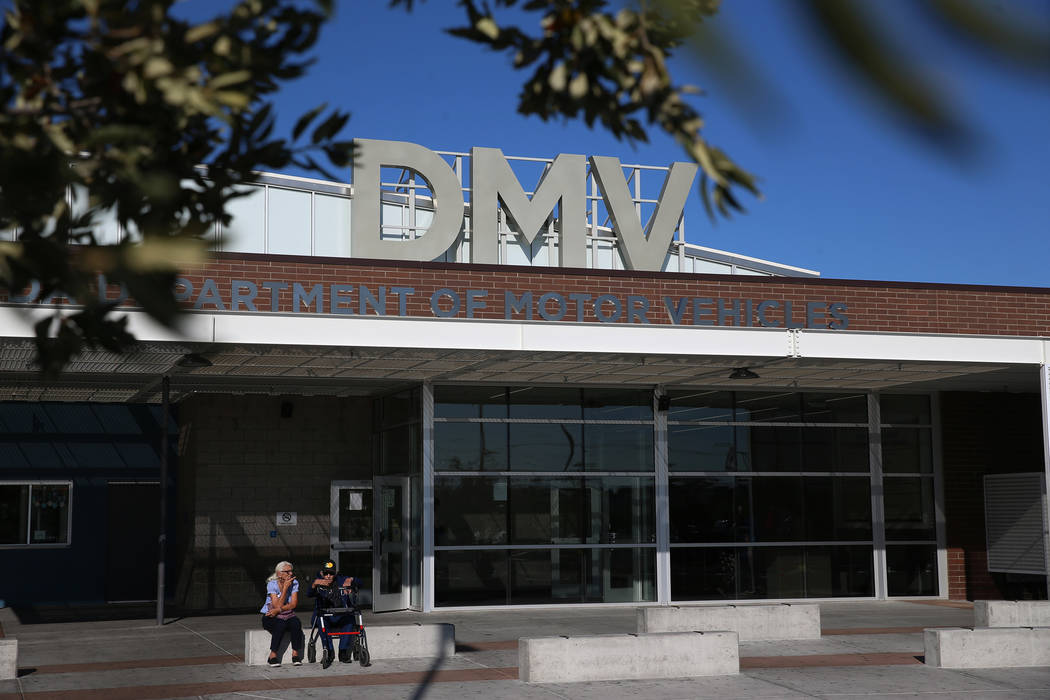 A former DMV contractor alleged misconduct in a $75 million computer modernization in a sealed lawsuit he filed in 2017. (Erik Verduzco/Las Vegas Review-Journal) @Erik_Verduzco3 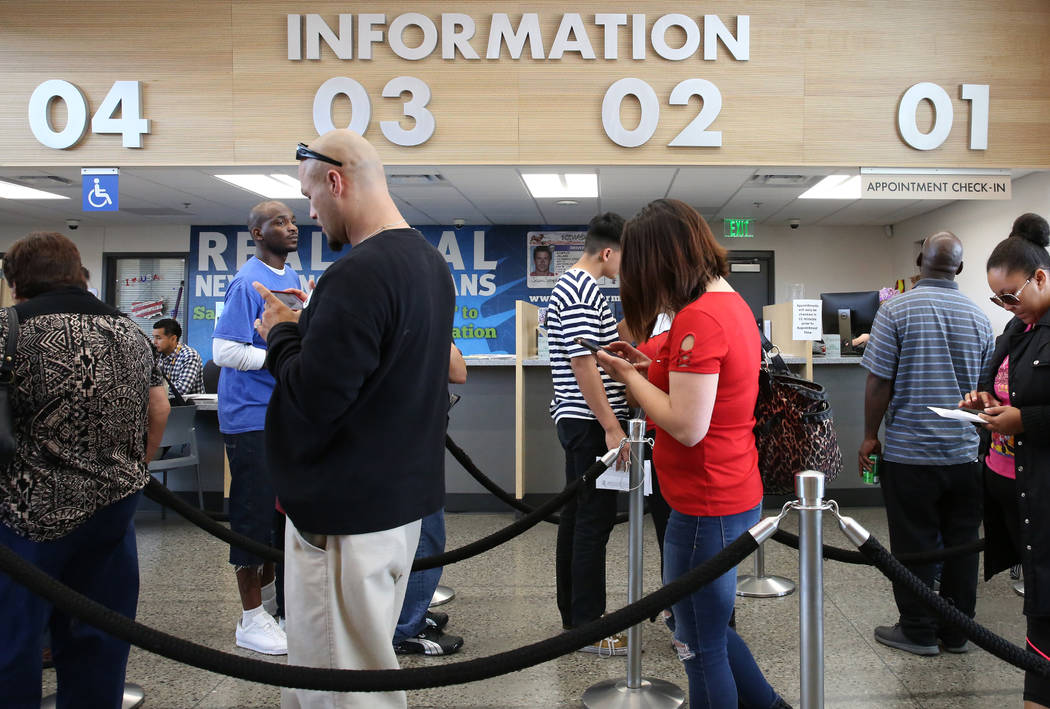 Customers wait in line the at the East Sahara office of the Department of Motor Vehicles, May 10, 2019, in Las Vegas. (Bizuayehu Tesfaye Las Vegas Review-Journal) @bizutesfaye

State employees delayed the implementation of a Department of Motor Vehicles computer modernization because the contractor failed to pay them as much as $4 million in bribes, a lawsuit obtained by the Review-Journal alleges.

The lawsuit, which was unsealed Wednesday at the Review-Journal’s request, also claims the company, Tech Mahindra, hired former DMV Executive Director Troy Dillard in 2016 after he helped it secure the $75 million contract.

The Nevada attorney general’s office, under Adam Laxalt, repeatedly asked that the lawsuit remain sealed as his office decided whether to join the case, but in the end Laxalt did not intervene despite the allegations of bribery, records show.

The disclosure of the previously secret case is the latest twist in the DMV computer system debacle, which has cost motorists as much as $26 million in unusable technology, consulting and payroll and resulted in Tech Mahindra being fired last year.

Former Tech Mahindra Senior Vice President Brian Coffey sued the company in September 2017 after he was fired for blocking the alleged bribes to state information technology employees Anand Vijayaraghavan and Karuppuswamy Manivannan through a third-party corporation, according to the lawsuit. While the lawsuit complaint lists Manivannan as the last name, other public records appear to show it as his first name.

Coffey settled the case last year and his attorney moved to seal the case as part of the settlement without revealing details of the agreement, records show.

The lawsuit alleges Manivannan and Vijayaraghavan, who were on the state selection committee that picked Tech Mahindra, delayed the implementation of the computer modernization when Coffey blocked the bribes.

Tech Mahindra attorneys did not file an answer to Coffey’s complaint, but in a filing about sealing the case the company said there was no factual basis for the bribery allegations.

“Consistent with Tech Mahindra’s conclusion that the claims lack all merit, the government did not intervene despite its opportunity to investigate for months,” wrote attorney Kirk Lenhard, who represented Tech Mahindra.

Jessica Adair, chief of staff for current Nevada Attorney General Aaron Ford, said she doesn’t know why Laxalt failed to act on the information in the lawsuit.

“I honestly wish I could give you an answer but I have no idea,” she said in a phone interview. “That was (Laxalt’s) call. He didn’t explain. I don’t know if there was a legal reason he didn’t join the case, but he didn’t share it with folks down the chain.”

Laxalt said he wasn’t sure what he could say about the previously sealed case.

“The decisions were made on this case by career prosecutors and civil attorneys with decades of experience at the attorney general’s office,” he said, adding that it was done in consultation with the governor and the DMV. “As this case came out from under seal, I’m reviewing the matter. I’m happy to discuss the case in as great of lengths as our ethical standards allow.”

In a statement Wednesday, Tech Mahindra said: “The allegations outlined in the complaint were made more than a year ago and were scrutinized by the relevant authorities. They are unsubstantiated and without merit.”

Coffey’s attorney, Richard Wright, referred questions to the attorney handling the case, Monte Neil Stewart, who could not be reached for comment.

In 2016, DMV officials gave Tech Mahindra a $75 million contract to modernize the agency’s computer system, but the company failed to provide competent staff and the state’s project manager did not set a timetable to complete the work, a state audit determined.

The Las Vegas Review-Journal reported in May that Dillard, the recently retired head of the DMV, took a job at Tech Mahindra just as his former colleagues were finalizing the contract. Dillard’s move to the contractor raised questions about his relationship to the problematic modernization.

On Feb. 2, 2016, Coffey received an email making him Dillard’s mentor and coach at Tech Mahindra, the lawsuit says.

Coffey then called his boss at Tech Mahindra, Arvind Malhotra, to ask about the hiring, the lawsuit said.

“Malhotra said Dillard as director of the Nevada DMV had helped Tech Mahindra win the Contract and now Tech Mahindra was hiring him,” the lawsuit said.

Tech Mahindra, an India-based company that says it employs more than 120,000 people in 90 countries, performed so poorly that DMV officials ultimately paid another company $166,000 to determine what went wrong.

A January 2018 assessment by Gartner Inc. called the Nevada DMV computer revamp “one of the most troubled public sector modernization efforts that Gartner has seen in recent years.” The state used an “unproven” technology with no history of successful implementation, and had “nonexistent” project management controls at the DMV, Gartner contractors wrote.

The director who replaced Dillard, Terri Albertson, moved from DMV director to a job that wouldn’t allow Gov. Steve Sisolak to replace her after he took office, records show. In that job, Albertson continues to oversee the modernization despite heading the previous failed effort. She did not respond to a request for comment.

The lawsuit alleges that Manivannan and Vijayaraghavan “engaged in a series of maneuvers, tricks and devices to prevent honest Tech Mahindra personnel from moving the project forward.”

“Anand and Mani took a ‘no pay, no play approach,’” the lawsuit said.

The techniques included telling Tech Mahindra staff to explore alternative solutions that wouldn’t work and asking for changes to the program just to later change their minds about the modifications, the lawsuit alleges.

The lawsuit said that the alleged bribe payments were supposed to go through a “front” company named inLumon. Top Tech Mahindra executives were alleged to have directed Coffey to pay at least $400,000 and as much as $4 million of state contract money to the company.

InLumon consultant Tuhin Verma, who worked at the DMV from 2002 to 2008 and is named in the lawsuit as asking for the payment from Coffey, said he never heard of the lawsuit and was never served in connection with the case.

“We have no idea what is going on here,” he said, adding that he was upset that he wasn’t served with the lawsuit so he could defend his reputation.

Verma said he and inLumon had nothing to do with Tech Mahindra or the DMV modernization. He also said he has had no contact with Manivannan and Vijayaraghavan, other than running into them at a store, since leaving the DMV.

According to the court records, the defendants did not have an opportunity to respond to the allegations because the proceedings were stopped after the settlement. Tech Mahindra was the only defendant that received a copy of the lawsuit.

Court records show Laxalt’s office considered intervening for nine months, extending a motion to seal the case to give the AG time to determine whether to get involved. In the end, Laxalt “declined to allege liability against Tech Mahindra,” court records show.

The order sealing the case also downplayed the importance of the case despite the loss of millions in state money.

“The public interest in this matter is low, given that the claims have been resolved early in the case without any government intervention or the need for the Court to make any substantive assessment of Mr. Coffey’s allegations,” Stewart, Coffey’s attorney, wrote in the seal motion that was signed by District Judge James T. Russell. “This low public interest is outweighed by strong privacy considerations favoring the settlement of claims subject to confidentiality covenants, particularly where (as Mr. Coffey acknowledges) the allegations are sensitive and the parties relied on continued confidentiality when they agreed to settle.”

The order sealing the case had been kept secret in apparent violation of Nevada Supreme Court rules, which say sealing orders must be available for “public viewing.”

Adair said the attorney general’s office is interested in any information about the case.

“If there is any employee in the state of Nevada who commits a crime, our office will not hesitate to prosecute,” she said.