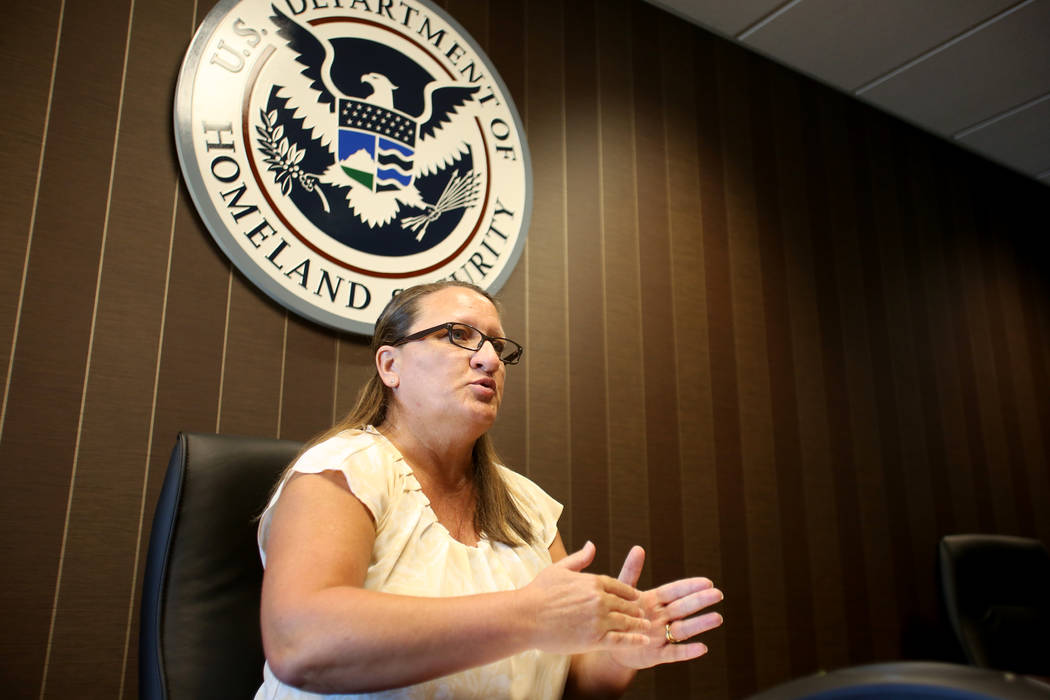 The top Immigration and Customs Enforcement official in Nevada wasn’t surprised that one out of every 14 state inmates is an undocumented immigrant, but she said there is little federal officials can do about it.

Dana Fishburn, the acting deputy field office director for ICE in Nevada, agreed to an interview after a Las Vegas Review-Journal investigation showed that nearly 1,000 state prisoners have ICE holds and about a fifth of those are repeat felons.

“I compare everything here to California because I’m from California and the numbers are probably double or triple of what they are here so, no, it’s not surprising,” she said.

But Fishburn could offer few solutions for the flood of undocumented immigrants who are in Nevada prisons, costing state taxpayers as much as $22 million a year.

She said people coming in illegally, people returning after deportation, and countries that do not take their nationals back if they commit a crime in the United States all contribute to the high percentage of Nevada’s undocumented prison population. Only systematic changes in immigration laws, which have not been updated for decades, could reduce the problem, she said.

“Congress could change the laws easily enough,” she said. “That is the only way.”

Before Donald Trump became president, ICE policy was to target only criminals for deportation. A recent policy change has ICE focusing on criminal undocumented immigrants but also picking up other undocumented people they come across when they arrest the criminals.

Fishburn said Nevada has only about 600 ICE detention beds, so many offenders are released on bond or with ankle bracelets awaiting a deportation hearing in front of judge.

And the deportation process can drag out for years.

“Those individuals that are not in custody — say, one of the mothers that’s not committed a crime, but she’s here illegally — she’s not going to court for three or four years right now,” Fishburn said. “Who knows what could happen in those three years? She could have three more babies.”

Fishburn denied that picking up the additional undocumented people, who have committed no crimes other than entering the United States illegally, clogs up the system. But she conceded that the system is overwhelmed.

“We are very limited on who … and how many we can hold,” she said. “And it’s a frustration for us as agents as well.”

Currently, there are as many as 1,100 criminals out on alternatives to detention, like ankle bracelets, waiting for a judge to determine if they will be deported, Fishburn said.

The Review-Journal investigation highlighted a case where a convicted carjacker was picked up by ICE after serving his state sentence, but ICE released him with an ankle bracelet. He went on to abduct and rape a woman on Tropicana Avenue.

In response to the Review-Journal’s request, ICE officials provided details of an undocumented immigrant from the Philippines who was released on bond three times by immigration judges.

Mark Lamson, now 37, was arrested on theft charges in 2010 and 2012 in California and both times was released on bond by immigration judges, records show. A judge again released him on bond pending his immigration hearing after ICE took him into custody in June as he was being released from a Nevada prison on possession of stolen property charges.

“It could be a number of things, like if he has an attorney, he could be appealing,” she said.

Despite those examples, Fishburn defended the ICE policy of releasing some convicted criminals on bond while they wait for immigration rulings.

“If they have community and family ties, that is one of the factors we take in to determine whether we bond someone out, prior record — there’s many different circumstances that we’ll take into consideration and before we bond or put them on the alternatives to detention,” she said.

Unlike state criminal cases where most records are public, little information about undocumented criminals is available to the media and public.

The Review-Journal filed two Freedom of Information Act requests for detailed criminal and immigration history of approximately 170 Nevada inmates who had ICE immigration holds and prior felony notations in their Department of Corrections history.

The FOIA office requested signed waivers from each offender, citing The Privacy Act, to release the information. But ICE public relations staff provided information on a handful of convicts without any waivers.

Hughes said ICE can provide information without violating the privacy law because public information officers operate under a policy memo that allows them to release more information than FOIA guidelines allow.

“We have that ability to release a great deal of personal information to the media that otherwise would not be released,” she said, adding that they have limited staffing so cannot research 170 cases.

ICE provided information on four repeat offenders for the prior Review-Journal story.

Hughes also provided information on the 65 Nevada felons paroled and released to ICE custody since April, including detailed information about Lamson and five other Nevada inmates. Of the 59 other undocumented parolees, 37 have been deported, two have received final removal orders and are about to be deported, eight are waiting for their hearings, and a dozen have been turned over for prosecution for reentering the country after deportation.

Administration officials contend there is no way to reduce the number of undocumented immigrants in Nevada prisons without lawmakers streamlining the deportation process, limiting asylum claims and securing the borders.

“Individuals are still going to commit the crime,” Fishburn said.

RUBEN NAVARRETTE JR.: Mayorkas is not a good fit for DHS secretary