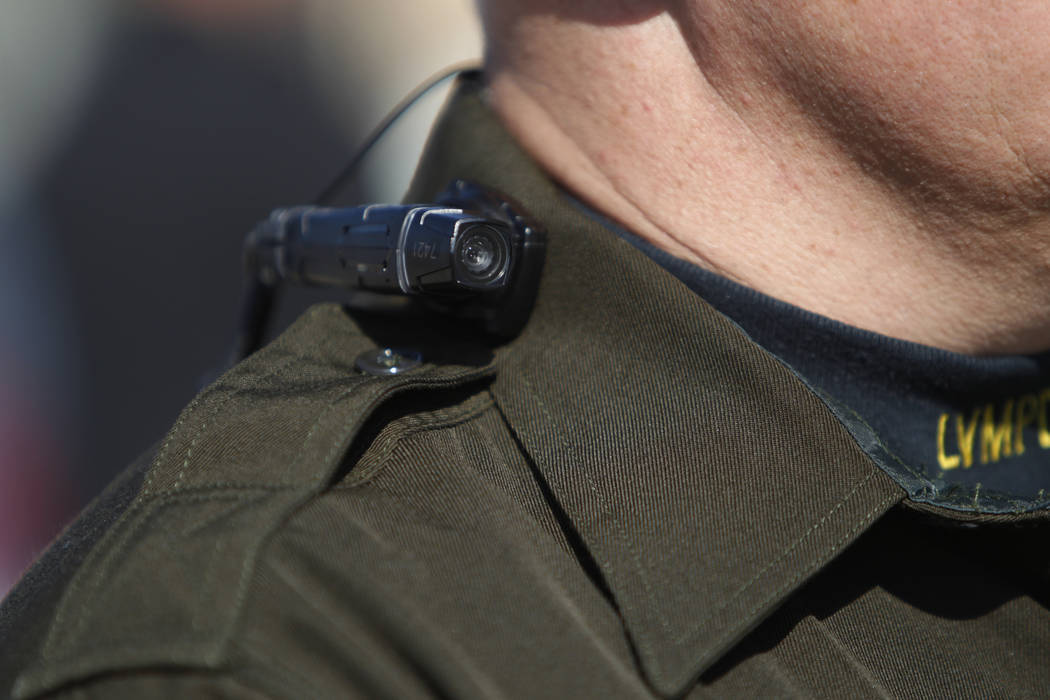 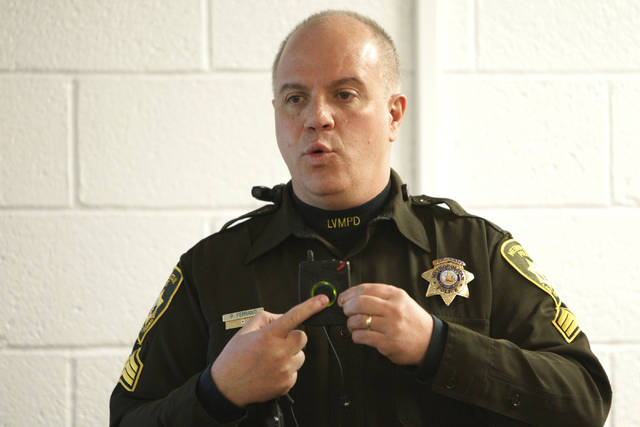 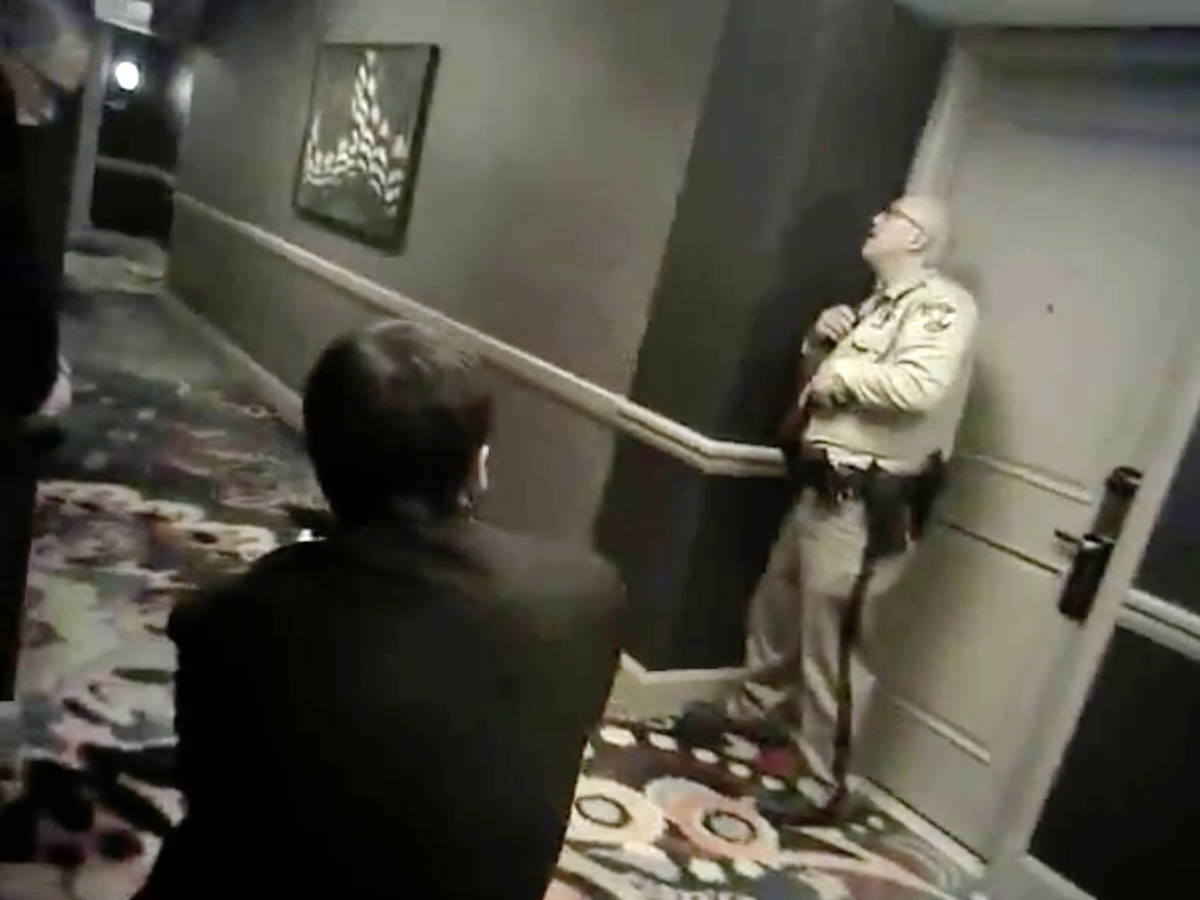 Body-camera footage is often requested by the media or the public as part of holding law enforcement accountable. In this footage from 2017, two Las Vegas police officers, paired with three armed Mandalay Bay security guards, were holding their position in a hallway one floor beneath the Oct. 1 gunman. (Las Vegas Metropolitan Police Department)

An hourlong copy of Las Vegas police body-camera footage will cost the public $280 starting next month, a fee that far outpaces other local law enforcement agencies in Nevada.

The new rate is almost six times greater than what the Metropolitan Police Department charged when it launched its body-camera program in 2014. The department raised its rate from an initial $48-per-hour fee to $192 per hour last July.

The fee is based on the total length of a video, not how long it takes detectives to edit out confidential information, a process known as redaction. For example, a half-hour-long video would cost $140 under the new rate, no matter how few redactions were made.

Police officials say the increase is necessary to recoup the costs of redaction, but open-government advocates slammed the costs as prohibitive and possibly illegal under state law.

“The whole purpose of the body cam is for the public to see the footage,” said Frank LoMonte, director of the Brechner Center for Freedom of Information at the University of Florida. “Once you start putting hundreds of dollars of fees on top of it, it ceases to be accessible.”

Advocates also say Metro’s growing fees throw into question how much footage the public will ultimately have access to, outside of videos the department has chosen to show and distribute during news briefings.

“The extraordinary power that we grant police officers must be matched with equally powerful transparency,” said attorney Gunita Singh, a legal fellow for The Reporters Committee for Freedom of the Press. “Body-worn camera footage is a paramount way by which we hold law enforcement accountable.”

The latest increase will take effect July 1, launching on the heels of nationwide protests calling for more police accountability and transparency.

Clark County Sheriff Joe Lombardo on Tuesday said police body-camera footage captured “thousands of hours” of local protests from varying angles. On June 13, at least seven attorneys and law students, trained by the National Lawyers Guild to monitor and document interactions with police and demonstrators, were at a protest and were detained.

During a news conference, Lombardo said legal observers arrested over the weekend were “antagonizing and obstructing” officers.

One of those observers, public defender John Piro, said it was paramount for the public to have unencumbered access to body-camera footage to vet the sheriff’s claims.

For example, recently released body-camera footage appeared to contradict Lombardo’s assertion that two photojournalists arrested during a May 29 protest didn’t identify themselves as press until after being taken into custody.

“It’s discouraging further investigation,” Piro said of Metro’s redaction fees. “There’s little injustices that occur all the time that should be outed, and they’re the reason why people are protesting in the street.”

Metro — the largest law enforcement agency in Nevada — equips all of its patrol officers with body-worn cameras.

The department increased redaction fees last year to pay for the salaries and benefits of detectives working in its public records unit, Sgt. Charles Jivapong said.

The fee is being increased this year to cover the cost of each detective’s retirement and health insurance.

“For every hour of video, it takes four hours to prep, research and redact,” Jivapong said. “Each detective would have to go frame-by-frame and break down that video for audio and visual redactions.”

It’s necessary for detectives to make the redactions because the videos often contain information that is sensitive to a criminal investigation, Metro lobbyist Chuck Callaway testified during the 2019 Nevada Legislature. Other times they contain graphic content.

“If you’re looking at video footage of a person being killed from multiple different angles on a video, you can’t take a civilian employee and have them redact that information,” Callaway said, referencing the Oct. 1, 2017, mass shooting at the Route 91 Harvest festival.

He pointed to training materials published by the Nevada attorney general’s office in November, which state that government agencies can recover actual costs — such as ink, paper or flash drives — but “not employee time in responding to the request, unless the request is extraordinary.”

Because Metro has a public records unit devoted to fulfilling record requests submitted by media organizations and the public, File said the department is essentially charging requesters for services that tax dollars have already paid for.

“Responding to record requests is part of the government’s job, so these costs are already assumed for staff,” he said.

The attorney general’s office does not enforce Nevada’s public records law, and it does not provide interpretations of the law, spokeswoman Monica Moazez wrote in an email.

District Judge Richard Scotti in 2018 issued a ruling that appears to support File’s position. In the ruling, Scotti determined that state law did not allow Metro to charge media organizations $50 per hour to redact more than 700 hours of body-camera footage from the Route 91 mass shooting.

“An excessive fee is the antithesis to government accountability,” Scotti wrote.

One of Nevada’s neighbors also recently shot down such fees.

Last month, the California Supreme Court ruled that government agencies had to bear the costs of redacting police body-camera footage before releasing it to the public.

No charges by some

By comparison, the Henderson Police Department does not charge to redact body-camera footage. North Las Vegas police only charge if requests require officers to work overtime.

In Northern Nevada, the Reno Police Department charges $28 for each staff hour spent redacting footage. The Washoe County Sheriff’s Office allows the public to view body-camera footage for free at the office.

State Sen. Ben Kieckhefer, who co-sponsored 2019 reforms that strengthened Nevada’s public record laws, said he was concerned to learn Metro was increasing its rate. He plans to ask the department why it’s raising body-camera footage fees.

“When you start talking about those types of dollars, it would certainly serve as a deterrent for a citizen from accessing records they’re legally entitled to,” said Kieckhefer, R-Reno. “I think that’s something we need to be very careful with.”