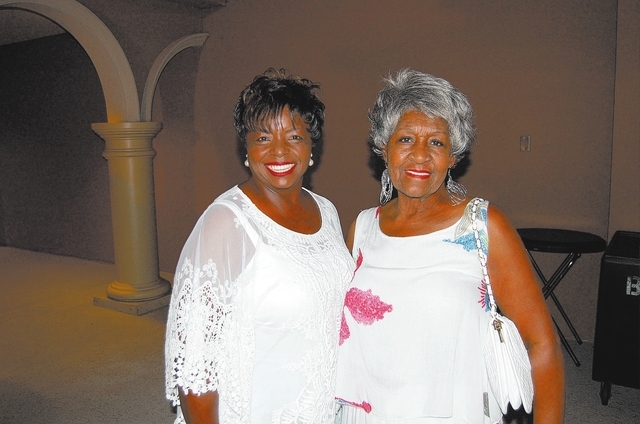 Guests showed up in all white to support the annual White Linen Affair presented by the 100 Black Men of Las Vegas Inc. June 28 at the Suncoast.

There were no long speeches, just a night of fun underneath swaying palm trees around the sea-blue water of the pool.

Dancers took to the dance floor when DJ Sweet Lou Collins spun the records. There also was line dancing and Chicago Steppin’ as a sea of white swirling skirts and dresses moved to the music. Some men wore matching white hats as part of their ensemble.

The first chapter of 100 Black Men of America was formed in 1963 in New York. Baseball legend and Hall of Famer Jackie Robinson was one of its founding members. Since its inception, its 100-plus chapters with more than 10,000 members have made it their mission to improve the quality of educational opportunities for African-American youth, mainly through mentoring programs.

The national chapters of 100 Black Men have touched the lives of 250,000 youth since its inception.

“Most of the men in our organization are tops in their field,” said Brian Pauling, president. “We have members that include politicians like Sen. Steven Horsford, businessmen, entrepreneurs and retired executives who all give their time and support to all of our various projects.”

While the organization is predominantly black men, membership is open to everyone who meets its criteria. Women are involved in carrying out various roles.

Lillian McMorris, the only female member, is the assistant to the president and has worked with the organization since it started in Las Vegas 14 years ago. She helped write its charter.

“I work with this organization because they are committed to the community. Mentoring kids changes lives,” she said. “We not only work with youth, we work with their parents.”

With the help of supporters such as Cox Communications, NV Energy, Caesars Entertainment and others, the group can plan for expanding its programs to other schools.