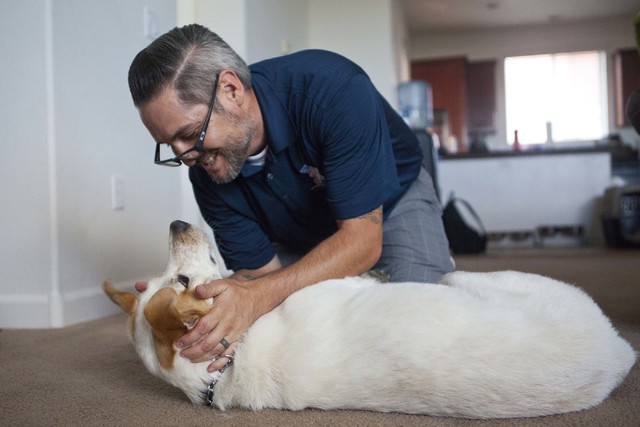 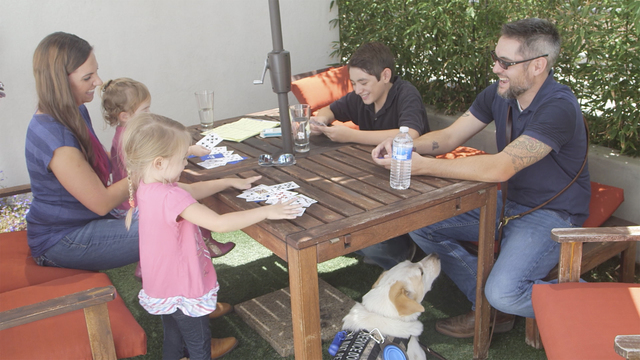 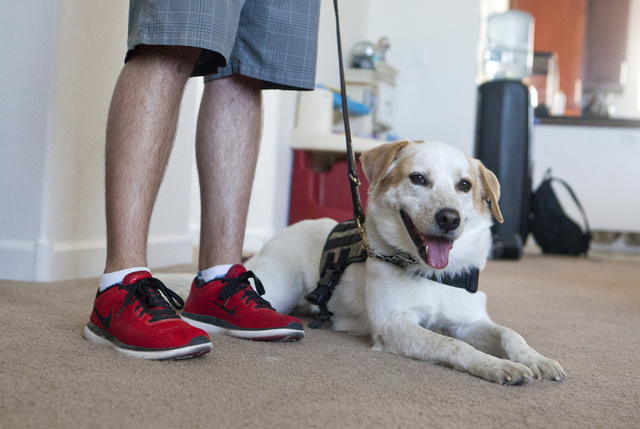 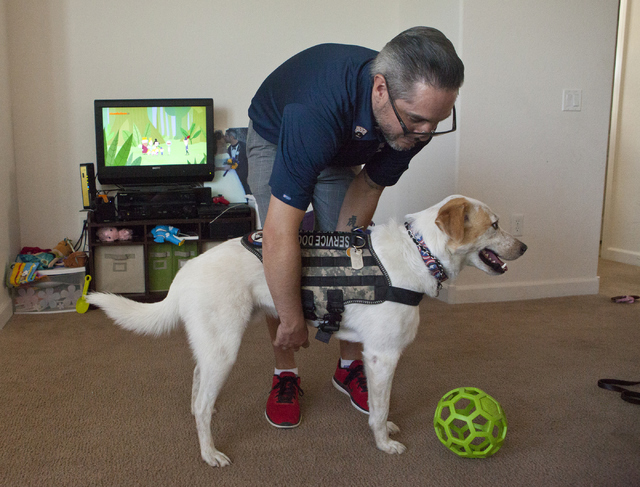 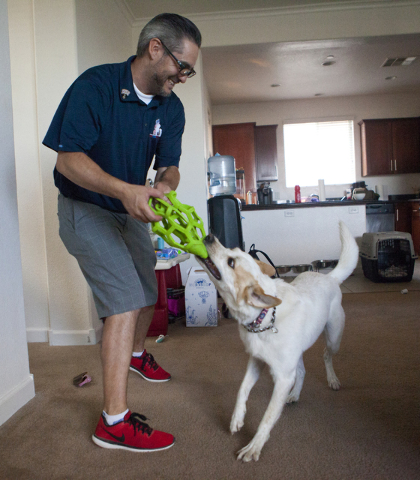 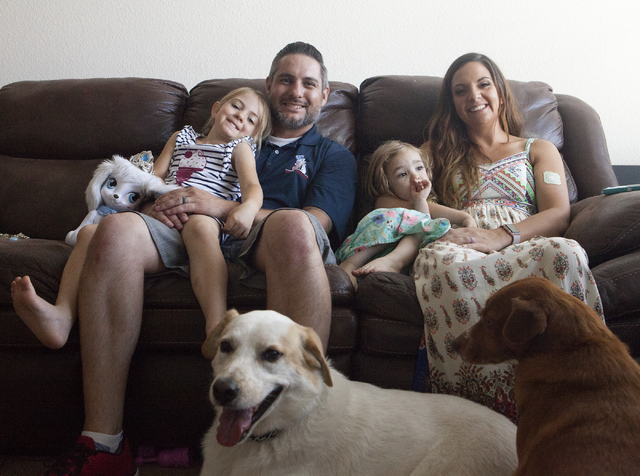 Army veteran Randy Dexter poses with his family at their home in Henderson on Friday, Sept. 2, 2016. Dexter suffered traumatic brain injury (TBI) while in the Army and now is part of public awareness campaign. (Loren Townsley/Las Vegas Review-Journal Follow @lorentownsley) 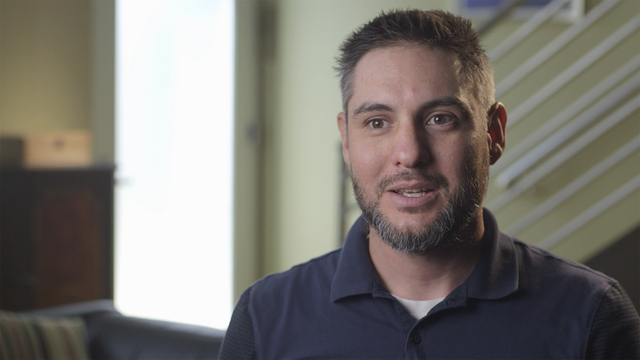 Randy Dexter and Captain are more than just dog owner and dog. That’s obvious from the way Captain looks for Dexter whenever the Army veteran leaves the room, and the way the Lab mix’s demeanor slips instantly from playful to dead serious once he’s wearing the jacket that denotes his status as a service animal.

Dexter is a retired U.S. Army staff sergeant who did two tours of duty in Iraq. He was diagnosed with both post-traumatic stress disorder and a mild traumatic brain injury, and the story of Dexter and Captain is featured in a new awareness campaign urging veterans and military service people to seek help for traumatic brain injury if they need it.

The campaign, “A Head for the Future,” is sponsored by the Defense and Veterans Brain Injury Center. In his video, Dexter shares the struggles he has experienced coping with his injuries and the reluctance he felt at first to seek help for it.

But, he says, “I was lucky, because when I was in the Army and had my head injury, I was kind of forced to get help.”

Dexter, 34, is a graduate of Green Valley High School who served in the Army for 11 years and had two tours of duty in Iraq. In 2005, Dexter, a combat medic, and his squad were hit by an IED, prompting a long, and continuing, struggle with post-traumatic stress disorder.

Then, after returning home and while still being treated for PTSD and training soldiers bound for Iraq and Afghanistan, Dexter suffered a brain injury during a recreational football game. He’s not sure, even now, what happened. All he knows is that he lost the memory of about 24 hours’ time and, even, of going to the game at all.

X-rays and imaging studies revealed no skull fractures or apparent injuries. But, afterward, Dexter experienced a worsening of already existing problems with his memory, concentration and equilibrium, and began to suffer migraines and severe, debilitating headaches that eventually compounded his PTSD and caused severe depression.

Dr. Scott Livingston, director of education for the Defense and Veterans Brain Injury Center in Silver Springs, Maryland, says symptoms of PTSD and brain injury often can overlap, making diagnosis a challenge. And when a brain injury does occur, he says, it often presents with no obvious symptoms that can be detected by X-ray or imaging scans.

In such cases, the problem likely is “more of a microscopic type of injury within the brain,” Livingston says.

Most civilians probably assume that brain injuries among service people are caused mostly by blasts and blunt-force trauma to the head. Yet, Livingston says, most are caused by motor vehicle collisions, training-related accidents, falls and sports and recreational activities.

Whatever the cause, military personnel are reluctant to report an injury or seek care for it. The current campaign is designed to raise awareness of brain injuries among service people, promote ways to prevent it when possible, and encourage men and women to report it and get it checked out, Livingston says.

“It’s well-known in scientific literature that the earlier someone reports a mild traumatic brain injury and goes to seek help, the better the chances are for better and more complete recovery,” he says.

During his treatment, Dexter participated in a program that paired injured veterans with service dogs. His experience with a dog named Ricochet was so good that he later welcomed the chance to be paired with Captain.

Dexter and Captain are a great team. Dexter says the dog can detect impending anxiety attacks even before he does, and that the dog can serve as a physical shield and protector in such public places as big-box retail stores, which can be particularly unnerving places for those with PTSD.

The true test of Captain’s effectiveness is that the dog has allowed Dexter to significantly reduce the medications he has to take. Today, it would be difficult for someone who doesn’t know the back story to detect Dexter’s struggles with traumatic brain injury, and it was his own previous interest in speaking out publicly about his conditions that led to his participation in the new awareness campaign.

Dexter now attends UNLV, where he’s majoring in communication studies and Spanish. He has been active on the debate teams, will be a peer adviser for other veterans, and hopes to kick off a music show on the university’s HD/internet radio station.

Dexter hopes his video and his story will help to persuade other veterans and active service people to seek out help for PTSD and brain injury. That can be difficult, he notes, because the standard soldier’s stance is that, whatever is happening, “you just deal with it, and that’s true across the whole military culture.”