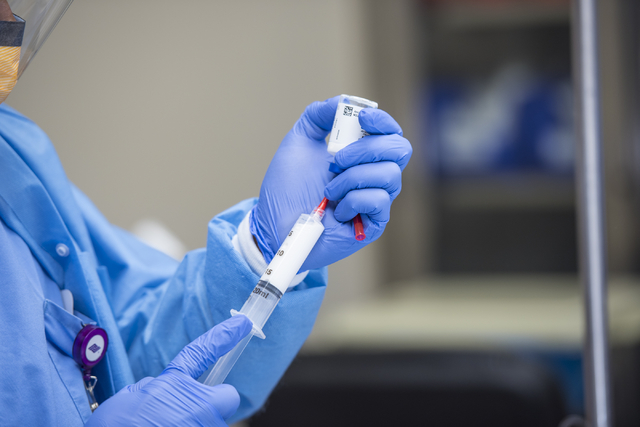 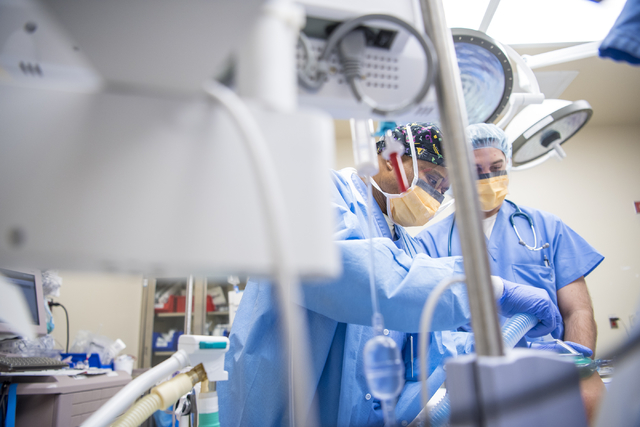 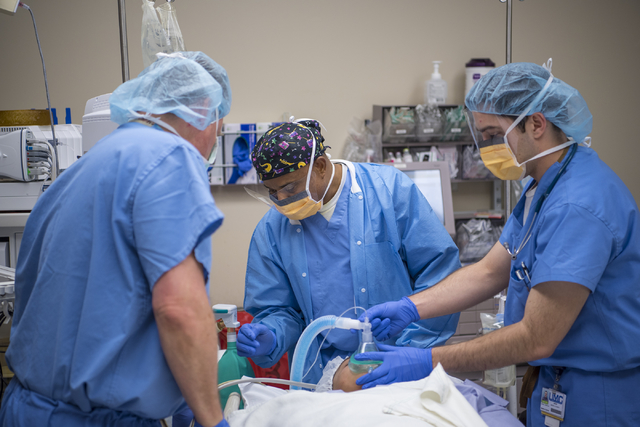 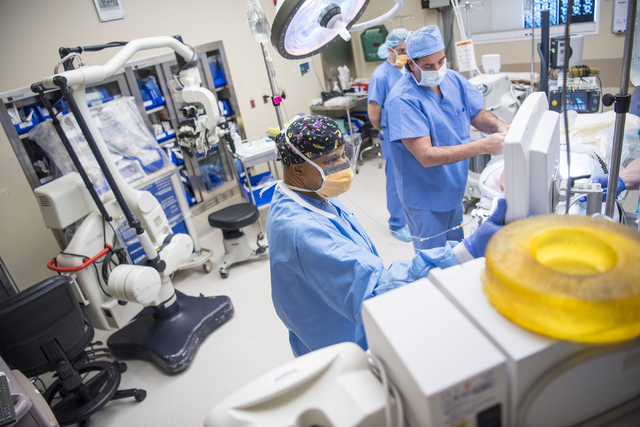 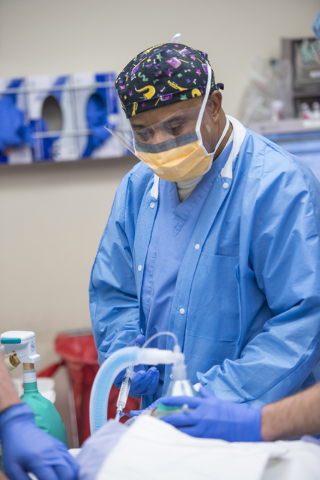 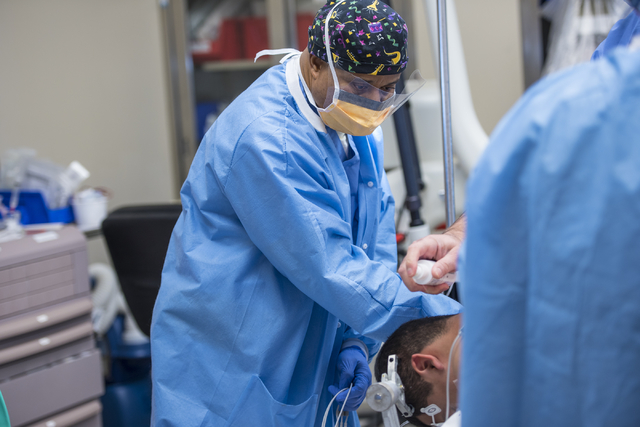 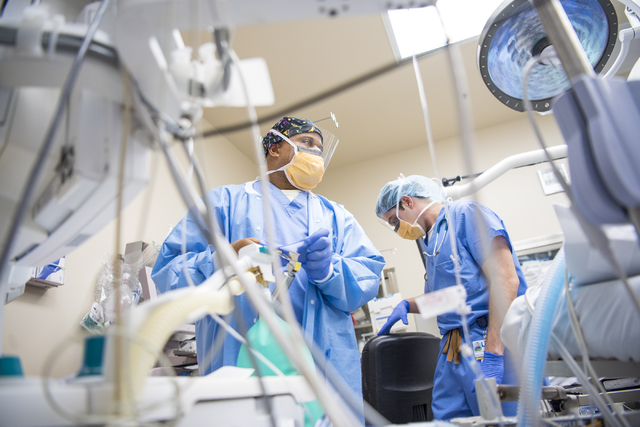 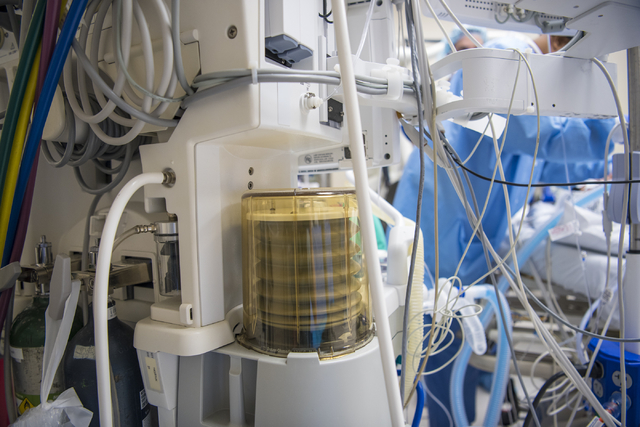 A machine is shown during a surgery at University Medical Center in Las Vegas on Friday, Feb. 12, 2016. Joshua Dahl/Las Vegas Review-Journal 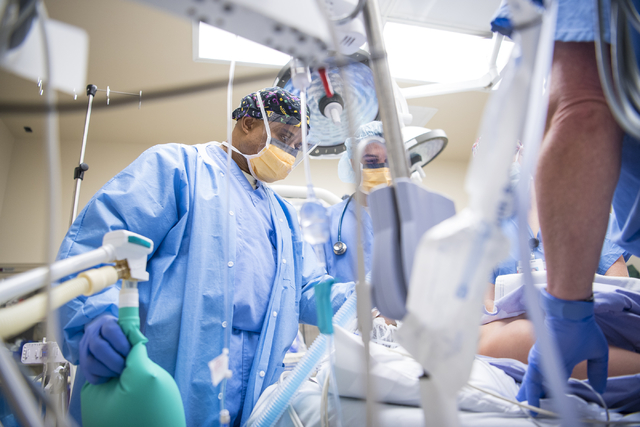 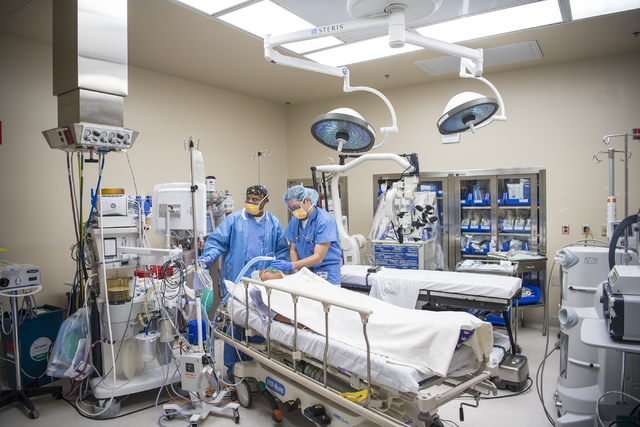 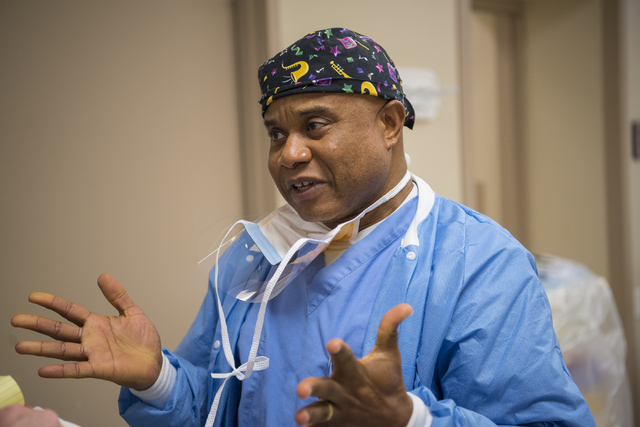 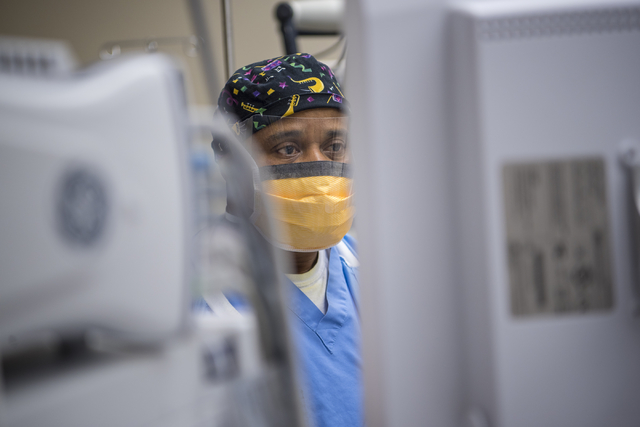 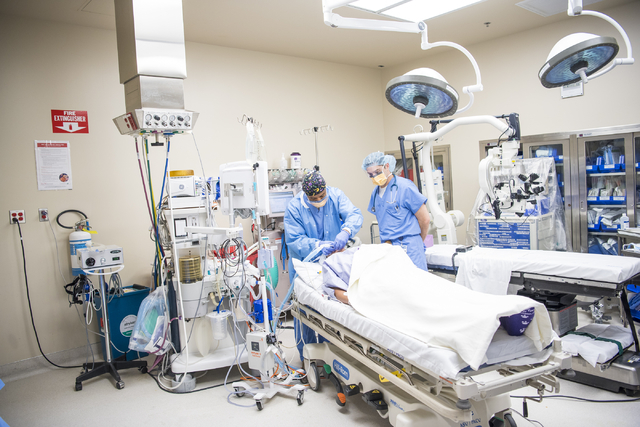 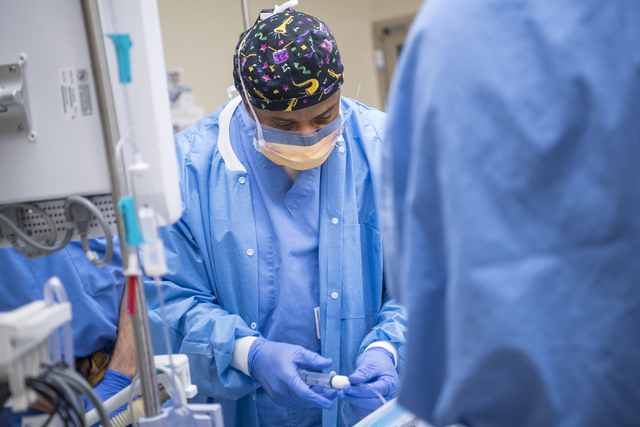 There’s nothing short of an everyday miracle — a medical, pharmacological, technological miracle — unfolding in an operating room at University Medical Center of Southern Nevada.

Recently, on an otherwise ordinary Friday morning, Dr. Keith Blum, a neurosurgeon, will be removing a portion of skull that is pressing on a boy’s brain.

The miracle: The boy will feel nothing during the operation and remember nothing about it afterward.

Then there’s this: The youth won’t die despite the stress to his body caused not just by the procedure itself but also by the effects of the anesthesia necessary to perform it.

And for that, credit Dr. Samson Otuwa, the scrub-suited guy sardined in amid an array of monitors and IV lines and cords that make his work space more resemble the cockpit of a jet than an operating room.

Otuwa is a physician anesthesiologist. While Blum is performing surgery, Otuwa will keep the boy alive but deliberately unconscious, during a span of time when, without Otuwa’s nonstop attention, the boy surely would die.

Anesthesia is such a routine aspect of modern medical practice that it’s easy to forget how amazing, and how bizarre, it really is. And, while patients know and certainly appreciate what surgeons and nurses do during an operation, the role of the anesthesiologist — someone who the patient probably met just before their operation and may see again only briefly in the recovery room — often is taken for granted.

Until the bill arrives, anyway.

Otuwa, who specializes in pediatric anesthesia — he estimates that kids make up about 20 percent of his practice — describes his job in a way most patients would find nothing short of frightening.

That’s because the cocktail of inhaled and intravenous drugs used to induce and maintain general anesthesia creates a state of “physiologic imbalance,” Otuwa says.

The drugs — which will render the patient unconscious, control pain, induce amnesia and prevent movement — “knock out the breathing, knock out his blood pressure, knock out his (control of body) temperature, knock out everything the body does when you’re alive,” Otuwa says. “So, now, it’s our job to maintain that state when (the patient is) alive but not awake.”

Dr. Mitch Keamy, a veteran Las Vegas physician anesthesiologist, says he doesn’t even tell patients he’s putting them to sleep because “I’m not putting you to sleep. I am creating a drug-induced coma which is reversible.”

Then, while the anesthesiologist quite literally keeps the patient alive and as comfortable as possible — a responsibility Keamy describes as acting as “the custodian of (the patient’s) well-being” — the surgeon can focus on the procedure itself.

“I think the anesthesiologist is just as important as the surgical process itself,” Blum says. “It can be the perfect surgery, and if the anesthesia is not up to par, the outcome might not be as favorable.”

During the operation, Otuwa will monitor a dizzying array of vital signs — including heart rate, body temperature, respiration, cardiac activity, oxygen saturation in the blood and carbon dioxide exhaled — as well as the patient’s “depth of consciousness” through brain function monitors that, he says, “tell you how conscious or unconscious a patient is.”

Through it all, Otuwa will continually administer and re-administer drugs and perform measures aimed at keeping the patient comfortable and manage the potentially deadly effects and side-effects of those drugs.

Another taken-for-granted miracle of modern medicine: Despite all of this complex medical and pharmacological choreography, anesthesia is relatively — maybe surprisingly — safe.

Dr. Daniel Cole, president of the American Society of Anesthesiologists, notes that a 2011 review of data put the risk of anesthesia-associated mortality among healthy patients at 0.4 deaths per 100,000 cases.

At the same time, there are data indicating that, over the past decade or so, anesthesia-related death rates have been “creeping up,” Cole says. “Not a lot, but creeping up.”

That is “not particularly due to anesthesia per se but probably due to a couple of factors,” Cole adds. Most notably, he says, patients today are “coming around for surgery (who) are sicker and sicker.”

Among the common conditions associated with general anesthesia complications are hypertension, diabetes, heart disease, conditions that involve blood flow to the brain, kidney failure, lung disease and obesity, Cole says, “and it has to do not only with the intraoperative piece but also with postoperative complications.”

Another reason for the apparent upward creep may be that “we have been doing a lot more procedures and new procedures that would essentially have been unthinkable about a decade or two ago,” Cole says.

Cole says his father recently was scheduled to undergo heart surgery at the age of 85, and “I don’t think we would have done that 20 or 30 years ago.”

“So anesthesia inherently has not changed or gotten worse,” Cole says. “It’s just (that) more risks are taken on with patients and procedures.”

Otuwa credits anesthesia’s safety record to “advances made in monitoring patients and because of the agents — the new drugs — that have come out on the market that are more friendly to the body.

“It is really very, very rare, indeed, to have an adverse event, because of the monitoring and because of the medications we have, not only (for) doing anesthesia but for resuscitating.”

Keamy recalls that when he began practicing anesthesiology 37 years ago, “monitoring technology was primitive, and drugs were primitive.”

Just 30 years ago, “I had a simple blood pressure monitor and electrocardiogram and a stethoscope,” he says. “There were no oxygen-measuring devices available. There were no ventilation measuring devices available. The technology to do invasive monitoring was much less advanced. We were just starting to get ultrasound technology, which was pretty primitive.”

Yet, anesthesia remains an often taken-for-granted part of medical care — even, Otuwa jokes, among anesthesiologists’ own family members.

“It’s like my 11-year-old son. He asks me, ‘Putting people to sleep, that’s all you do? You went to school for 11 years just to put people to sleep?” Otuwa says, laughing.

In the operating room, Otuwa begins by giving his patient calming medications (medications for nausea or digestive upset also can be given preventatively, if necessary). Then, other inhaled and injected ingredients of the anesthetic cocktail will be administered progressively over time as Otuwa constantly gauges their effectiveness and watches for potential adverse reactions.

The last drug the patient will remember receiving is the one that causes unconsciousness. That’s called the induction drug, and that’s “when we ask you to count for like 10 seconds and out, and then we take control from there,” Otuwa says.

The induction drug is “very potent,” Otuwa says. “It stops your breathing. It knocks your blood pressure down.”

“So we have to breathe for you” Otuwa says, via intubation — the placing of an artificial airway — and a mechanical ventilator. Then, throughout the operation, Otuwa will manage all of the body’s processes that the body normally would manage for itself, deal with any unanticipated changes to the patient’s physiological state that might arise and keep the patient’s vital signs within acceptable ranges.

The anesthesiologist’s job is to “focus on the whole patient, while the surgeon is focusing on … getting a good outcome,” Keamy says. “We’re supposed to be parked there behind our bank of monitors and managing the patient’s overall physiology, managing the tenor of the room, managing the surgeon a little bit. My job is to make the procedure as safe and as comfortable for the patient as possible.”

The operating room is silent as Otuwa, Blum and other surgical team members work. Otuwa stands at the head of the table, occasionally injecting medications into an intravenous line, peering at his monitors constantly and examining the condition of his patient. The atmosphere is calm and almost unsettling in its routineness.

The tenor might be noticeably different with a trauma case or an emergency surgery. It’s in such cases “where you have the highest incidence of awareness of anesthesia,” Otuwa says.

Anesthesia awareness, or intraoperative awareness — in which the patient reports being aware of what was going on during surgery — “is a concern with some patients, and it tends to occur in high-risk groups of patients,” Cole says.

“It can be someone with medical conditions that may cause your blood pressure to go down unsatisfactorily” or occur when a medical issue requires lighter anesthesia to maintain the patient’s safety, Cole says. Intraoperative awareness also is more common in patients who have experienced it previously or whose family members have experienced it, “or if you drink a lot of alcohol or take a lot of other medications … related to the anesthetic, such as pain medications.”

The sounds escaping from the room’s monitors — beeps, drones, occasional higher-pitched trills — provide the operation’s musical score, whose individual notes are discernible only to Otuwa. And when the patient finally does awaken, Otuwa’s role, as vital as it has been, may be one that the patient acknowledges only briefly.

At least until that bill arrives? Otuwa laughs.