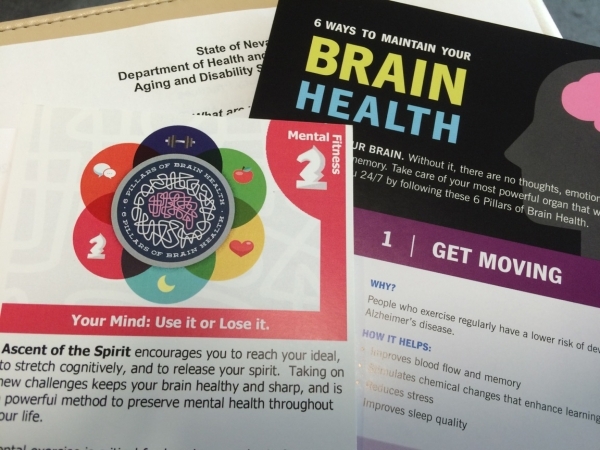 Pamphlets handed out at a talk on brain health are seen July 22 at the Cleveland Clinic Lou Ruvo Center for Brain Health, 888 W. Bonneville Ave. A presentation, given by Anita Ward, Ph.D., gave various ways in which one could maintain brain health. Guidelines included aerobic exercise, occupying the mind with hobbies such as board games and challenging it to learn a new language. (Jan Hogan/View) 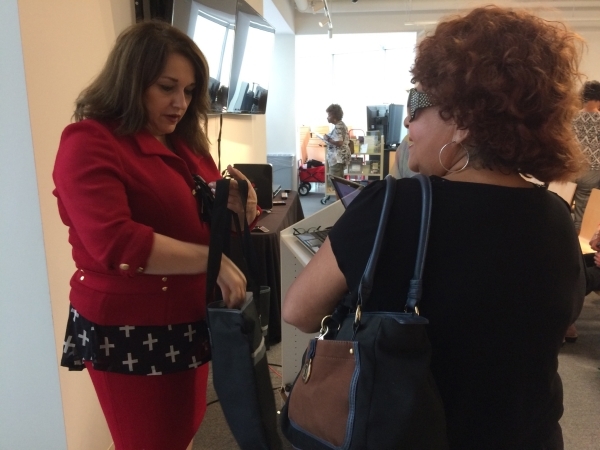 “Science used to think our brains grew until adulthood, and then it was over. But what we’ve learned is that your brain will continue to change through your life. Even as you’re sitting here, listening to me, you’re generating new brain cells,” said Dr. Anita Ward at a July 22 seminar held at the Cleveland Clinic Lou Ruvo Center for Brain Health, 888 W. Bonneville Ave. “Now, we know that the more we stimulate the brain, the more experiences we have, the more connections your brain is making, and it’s actually growing. (This discovery has) revolutionized the way we approach brain health.”

She said the brain is always working, from the day we are born until we die. The 3-pound organ contains 100 billion neurons and 500 trillion synapses, allowing us to have an estimated 70,000 thoughts a day.

With Americans living longer, life expectancy is now close to age 85, and by 2030, 20 percent of Americans will be 65 or older, according to the Centers for Disease Control and Prevention. So it makes sense to keep our brains healthy and working in top shape.

Several medical studies show that the fitter you are, the healthier your brain becomes, arguing physical exercise is of paramount importance.

“That doesn’t mean you have to run out and get a gym membership to David Barton,” Ward said. “… It’ll lower your risk for Alzheimer’s disease, but it also improves your blood flow and stimulates all these endorphins that make you feel good and have a positive attitude.”

Without being exercised, the brain shrinks as we age, is less adaptable to change and is more vulnerable to brain disease, Ward said.

Brisk walking is a good choice, she said, as is gardening or cleaning the house. If you do these activities with a friend, all the better, she said, as being socially involved is also good for the brain.

Exercise decreases stress, another foe to brain health. Ward’s talk covered four types of exercise. Aerobic should be done five days a week for 30 minutes a day. It does not to have to be 30 continuous minutes, but it does require getting the heart rate up. To figure out your aerobic heart rate, subtract your age from 220 and multiply by .80.

Strength training should be done two to three times a week and involve all major muscle groups, the guidelines said, as it builds muscle and strengthens bone. Flexibility exercises include stretching, done 10 minutes at a time for three or more times a week. Yoga is a good choice. Balance is often overlooked when we think of exercise. Mix it up — try standing on one foot; walk backward; shuffle sideways. Dancing is also a good way to maintain balance, Ward said.

Powering the brain requires nutrition, so eating correctly is as important for the head as it is the waistline. Ward said the Mediterranean diet, which is heavy in fish and vegetables as well as red wine, is thought to be best.

Just like muscles follow the “use it or lose it” doctrine, so does the brain. Keeping it sharp includes finding new hobbies. Do crossword puzzles or sudoku and play cards, chess or board games. These will help improve your reaction time and problem solving.

Branch out your social circle through volunteerism or joining a club. Take in concerts and visit art museums.

“When you’re meeting new people, or interacting, or educating yourself, you’re creating new neuro pathways,” Ward said. “… What we’ve found is, the more you stimulate the brain, the more experiences you have, the more brain cells you can create and the more connections you can create. So, your brain just doesn’t stop working. It keeps going.”

Quiet time is important. Cuddle with your pet and meditate.

Really want to pump up your brain power? Learn a new language. A new study by the Alzheimer’s Association International Conference studied people who spoke two or more languages and had some type of dementia.

The study, done in India, included nearly 650 people, 200 of whom had Alzheimer’s, with the others having other types of dementia. Roughly 390 spoke two or more languages. It’s the largest study on the topic to date.

Sleep is also important for the brain. The clinic recommends six hours or more each night.

The Cleveland Clinic offers a free, online test to see how well you take care of your brain. Visit healthybrains.org.