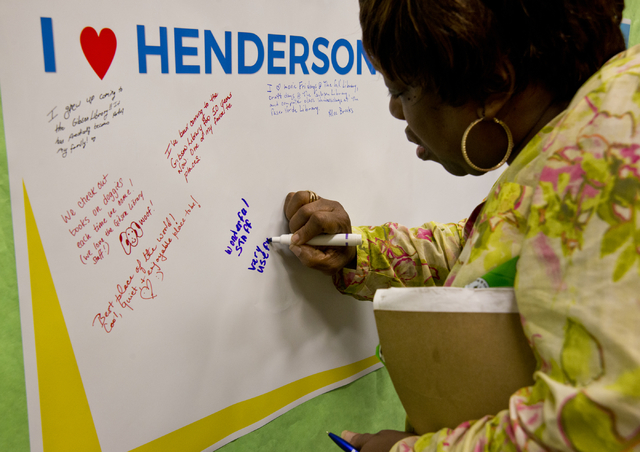 Joanne Washington leaves a message on a poster at the Green Valley Library in Henderson March 1 during event introducing the library system's new logo and website. Daniel Clark/View 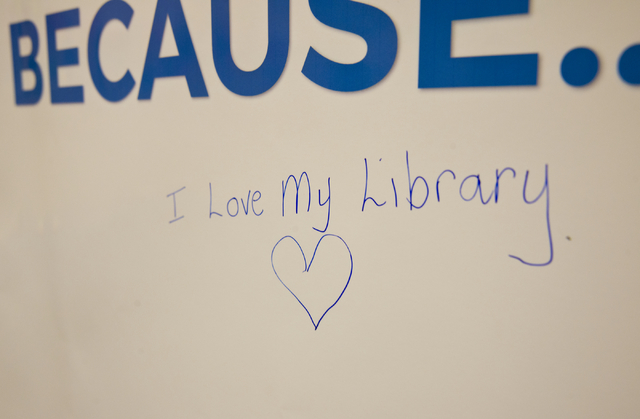 A message left by a visitor on a poster is seen during an event featuring the new Henderson Libraries' website and logo at the Green Valley Library March 1. Daniel Clark/View 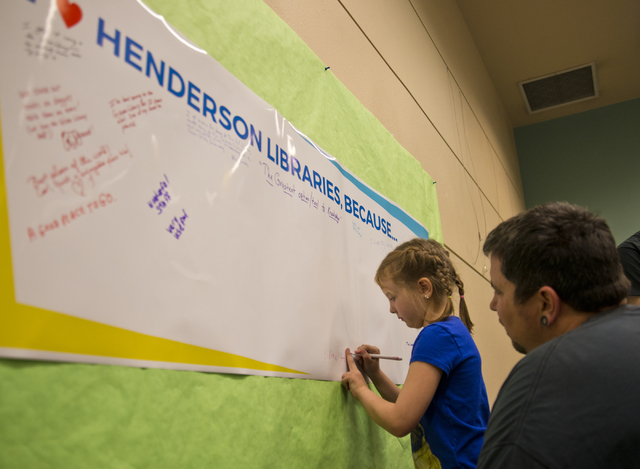 Aisleigh King leaves a message on a poster as her father, Cameron, helps during an event featuring the new Henderson Libraries' website and logo at the Green Valley Library March 1. Daniel Clark/View 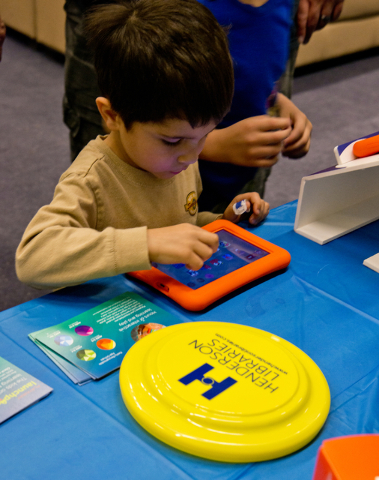 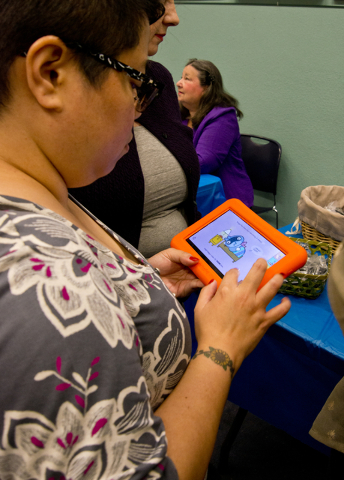 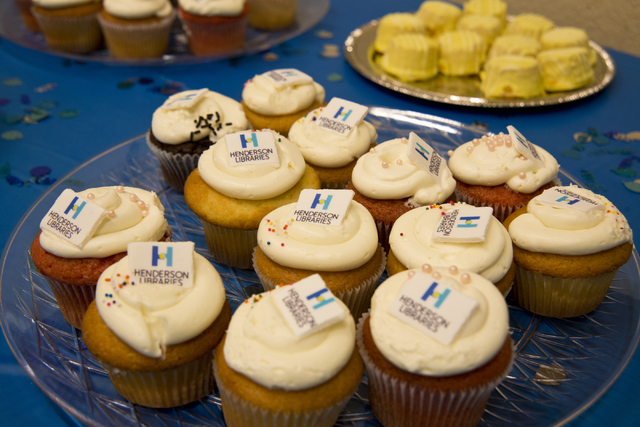 Cupcakes branded with the new Henderson Libraries logo sit on a table at the Green Valley Library March 1. Daniel Clark/View 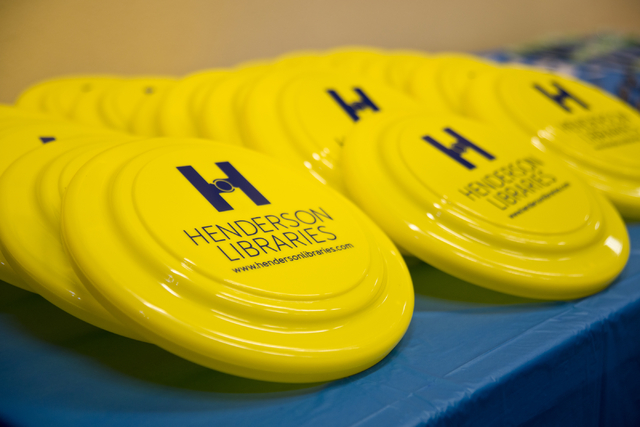 Frisbees branded with the new Henderson Libraries logo lie on a table during an event featuring the new website, logo, and educational tablets at Green Valley Library in Henderson on Tuesday, March 1, 2016. Daniel Clark/Las Vegas Review-Journal 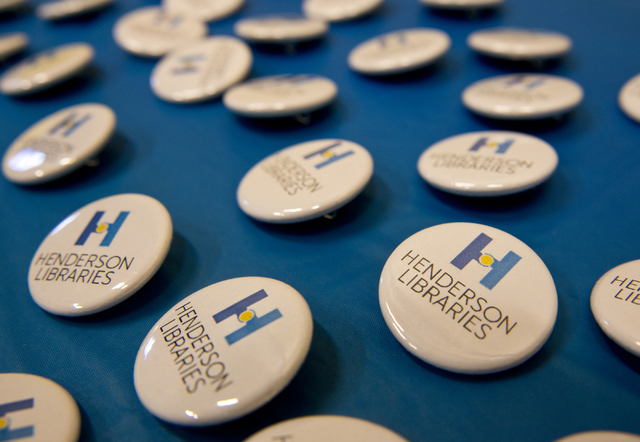 Pins branded with the new Henderson Libraries logo lie on a table during an event featuring the new website, logo, and educational tablets at Green Valley Library in Henderson on Tuesday, March 1, 2016. Daniel Clark/Las Vegas Review-Journal 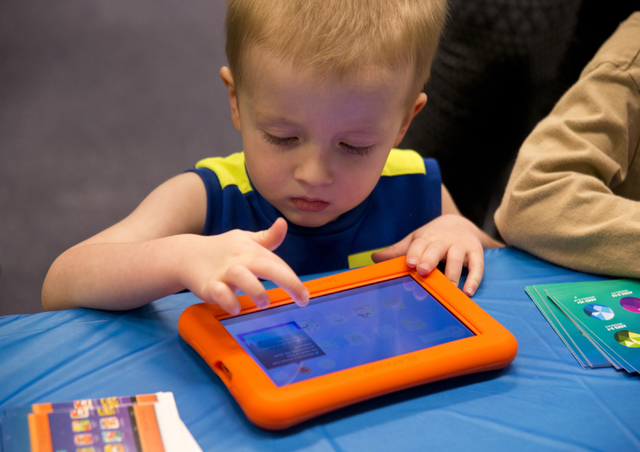 Between the new logo and a major redesign, visitors to Henderson Libraries’ website may not recognize it.

At the Green Valley Library event, tables were set up in the gallery space featuring refreshments, small promotional items bearing the new Henderson Libraries logo and information about programs and services.

“We want to give people the opportunity to see the library in a new way,” executive director Angela Thornton said during the event.

She said some library patrons may be unaware that their membership allows them to watch movies and TV shows, listen to music and read the most recent issues of magazines and other periodicals. Thornton said Henderson Libraries plans to introduce a new digital library card in the next couple of months to make it easier for patrons to access such content.

Brochures for those types of offerings were arrayed near a wide-screen computer monitor that sat atop one of the tables, displaying the revamped website, which was retooled to be more compatible with mobile devices, such as tablets and cellphones, said digital branch manager Joy Gunn, who helped design and write code for the site. It took seven months to complete and also was made to be more user-friendly, Gunn said.

Henderson Libraries used existing staff to revamp the website, and it also contracted with a company called Communico for $8,000 annually to provide the platform, host the website and assist with some technical details.

In conjunction with the push to promote digital content, the district spotlighted its new Playaway Launchpad devices for children ages 3 to 10. The Launchpads, which can be borrowed like a library book, feature 7-inch screens and come with educational apps dealing with subjects such as math, science, animals and language. Several of the devices were displayed at the event.

“It’s geared for them exclusively,” said Cameron King, whose 6-year-old daughter Aisleigh was exploring one of the devices.

King said the devices, which feature a protective rubber case and come with a charger, were beneficial because children who use them won’t be exposed to games and other content geared toward adults. The Launchpads also are a good primer for children as far as technology goes, said Assemblywoman Ellen B. Spiegel, who attended the Green Valley Library event.

“It helps train our kids to function extremely well in the world,” said Spiegel, a former president of the Friends of Nevada Libraries, which is no longer active.