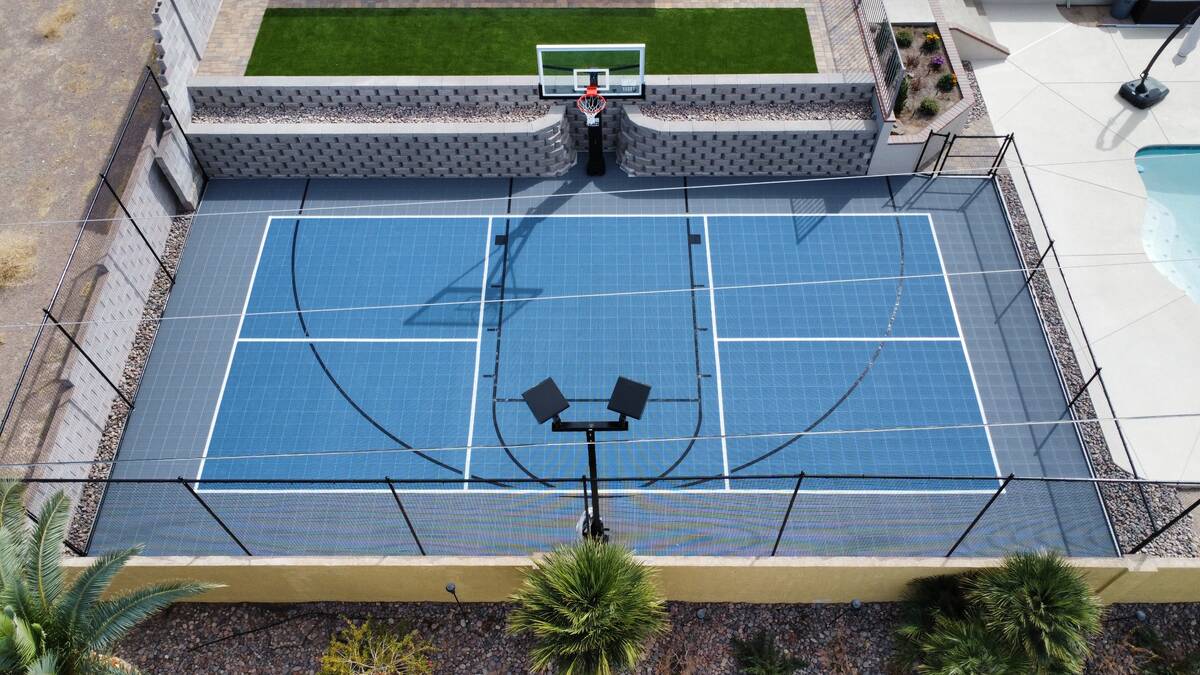 This versatile basketball court can be turned into a pickleball court with the addition of a net. According to Miles Reynolds, owner of Sport Court Las Vegas, people demand more flexibility from their courts. (Sport Court of Las Vegas) 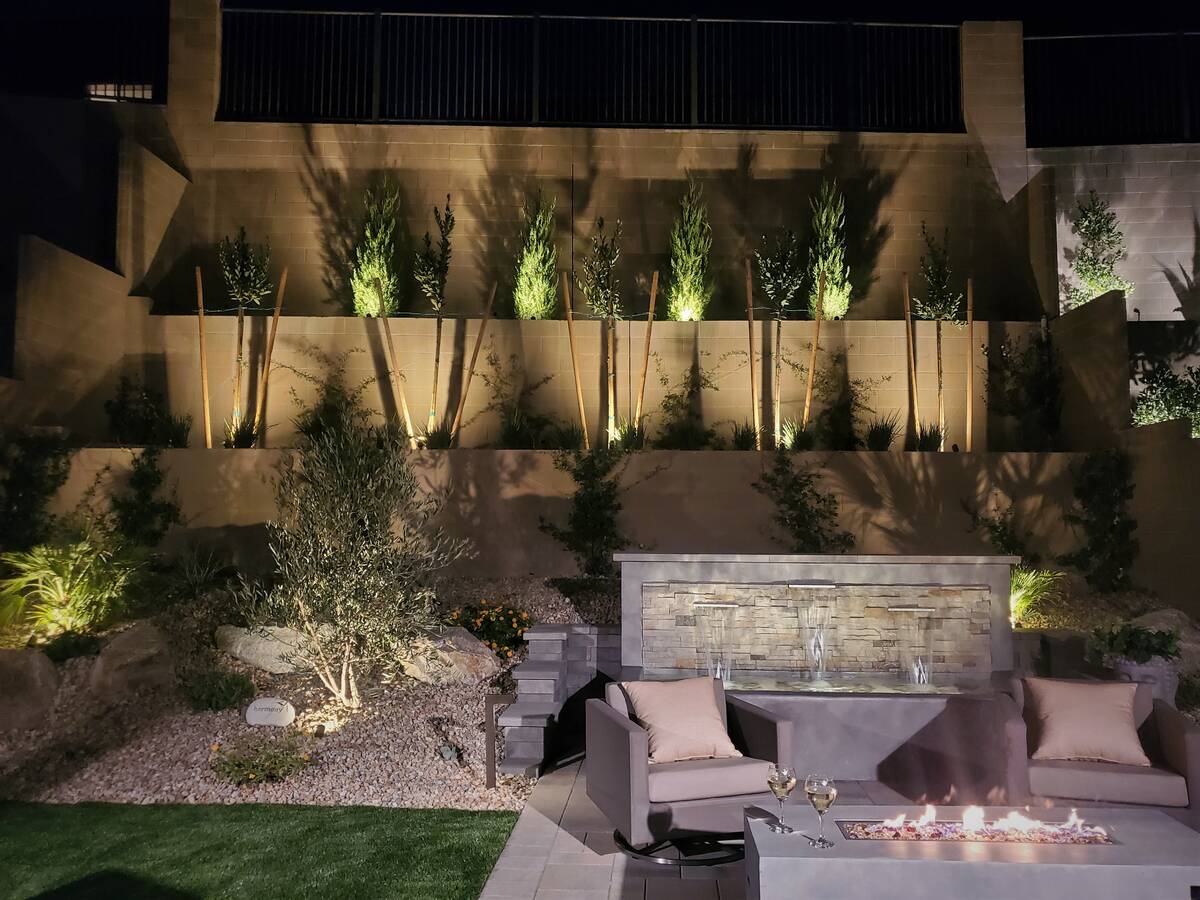 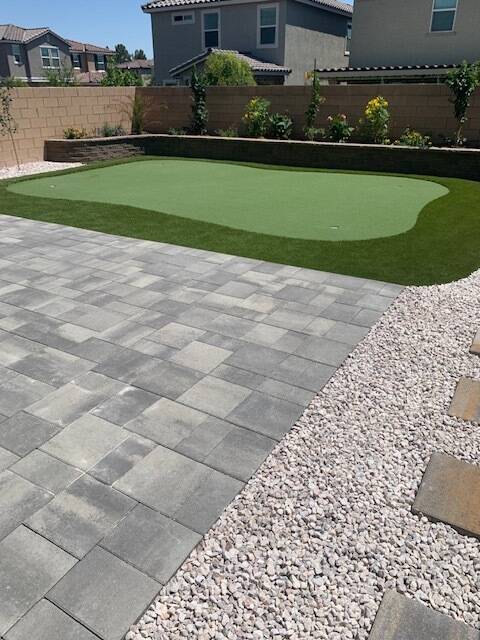 Alberto Gordillo, owner of Acrew Landscape, likes to create multiple destination areas in the yard, such as this putting green next to the patio. (Acrew Landscape) 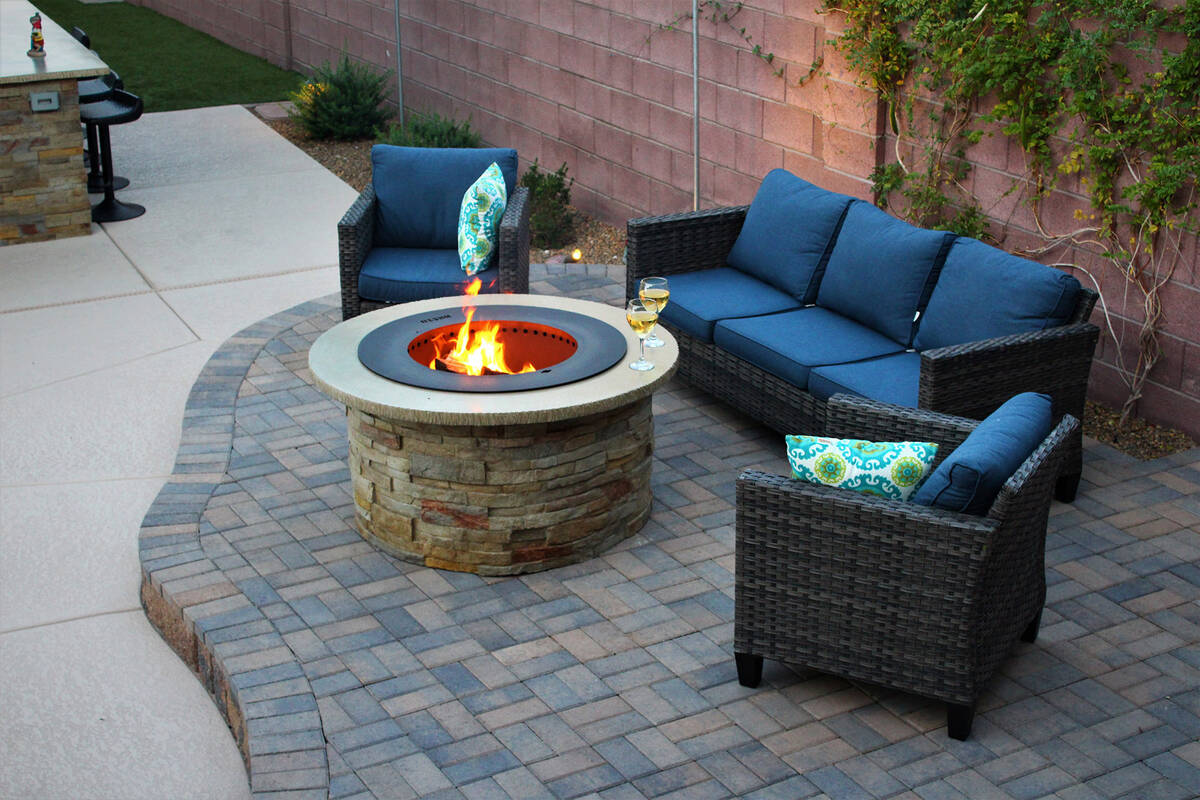 Some backyards have that “wow” factor. Maybe it’s a specific amenity or simply the way the space is set up. They’re great for gatherings, or they may have something else about them that makes any friend, neighbor or relative want to overstay their welcome.

Homeowners often think a backyard that’s great for entertaining requires a pool. That’s not really the case, landscape and backyard design pros say. We talked to a few experts about ways to make your backyard the place everyone wants to be, regardless of your yard size or budget.

For the past few years, modular surfaces for backyard courts have been in high demand, according to Miles Reynolds, owner of Sport Court Las Vegas. The most popular court request he receives these days has strayed slightly from the typical basketball court. People demand more flexibility from the courts these days, Reynolds says.

“Nothing holds a candle to pickleball, that is the by far the biggest request,” Reynolds says. “Basketball is still up there, but now it’s more of a mix; people want to put a hockey or soccer goal out there, they want to play volleyball, badminton or four square, too.”

Modular surfaces have also grown in popularity because the ½- or ¾-inch panels, which rest on concrete, offer impact resistance for falls, and older players appreciate less stress on the joints, Reynolds says. He says a 30-foot-by-60-foot court is ideal for maximizing the number of games you can play on one surface.

You can have a pickleball court on it, a multi-height net for badminton and volleyball, incorporate a basketball hoop and have room for kids to play roller hockey and other games. If you don’t have that much space, you can get plenty of utility out of a 25-foot-by-30-foot surface as well, Reynolds adds.

Reynolds’ teams design the entire backyard environment, including landscaping, custom logos, fencing and lighting. The surface requires a 4-inch-thick concrete slab beneath it. Depending on the court’s size and how much or little customization you want, court prices range from $20,000 to $60,000 and are usually built in eight to 12 weeks.

“We find people end up doing just about everything on them. They’ll hold a reception out there with chairs and tables and a DJ for a party,” he says. “The other thing about Sport Court is that the surface lasts a long time. We have courts that are 30 years old and have been fully exposed to the sun. They lost some color, but the structural integrity is still very much intact.”

If a court system isn’t the right fit, there are plenty of other ways to create a backyard that is great for entertaining and hanging out, says Alberto Gordillo, owner of Acrew Landscape in Las Vegas. Gordillo brainstorms ideas with customers after learning a little about their goals and budget.

The landscape pro likes to create multiple destination areas in the yard. Fire pits are a popular request; so, a dedicated sitting space around a pit may be one zone. A putting green and a bocce ball area can serve as other zones to entertain and play. In-ground trampolines and dog runs are also common needs.

Gordillo likes to throw a little creativity into the mix, too. He recently created a dog run with turf in the shape of a dog bone.

“As I make suggestions, people start to see the ideas in their mind,” he said. “You start to see that ‘wow’ in their eyes, and they can see their kids having fun and how they can have people over. To me, it’s really about several small ideas working together, and you don’t have to spend $100,000 on your backyard.”

Gordillo takes a “60/40” approach to small yards. About 60 percent of the yard is usually covered with patio, and it’s a flexible environment for sitting, barbecuing, a portable fire pit or something else. The 40 percent on the perimeter of the space is key, too. This is where he introduces color and different elevations. He may use synthetic grass, flowers, plants and LED lights and build small retaining walls in corners.

“With a small yard, the moment you open the door, I like a nice patio for sitting with guests, a small retaining wall in the corner with flowers and something green — it can be turf or something else, but you want to see that green,” he says.

Chris Mauri, owner of Mauri Landscapes in Las Vegas, takes a similar approach to small yards. He will incorporate raised planters along the edges of the sitting area. Water walls and wall fountains also work well, as well as plants and flowers that grow up to the top of the wall. The right trees can create a welcoming canopy effect.

“When you raise something up along the walls, your eyes go up and it makes the area feel like it’s bigger and it’s cozy,” Mauri says.

When space allows for it, Mauri incorporates multiple patio areas in a yard.

“Custom outdoor kitchens are big where people kind of create that bigger dining experience,” he says, “and you can also create these remote patios, destination spaces, so you’re going from your main patio to another one. If there’s a view, you can raise that one up. The whole idea is to create spaces where you can entertain. … You’re trying to create a setting, so to speak, in which to do life.”

Mauri also said there are plenty of budget-friendly things you can do to make your backyard more inviting right now. He suggests:

If you need patio shade, a couple of large umbrellas that only cost a few hundred dollars at a home improvement store can be just as effective as an expensive built-in patio cover.

“Just make sure you roll them down when you’re done, otherwise the wind could damage them,” he cautions.

Instead of pavers or hardscape, a more budget-friendly but appealing approach is to use compacted decomposed granite (otherwise known as “chat”) for a sitting area.

Fire pits don’t need to be expensive either, he adds. The pro has even seen some people create them out of a fire-proof bowl. There are plenty of budget-friendly build-your-own kits at hardware stores too.

Hanging string lights can be a mood changer. “It doesn’t require a lot of money, and it adds a little ambiance.”