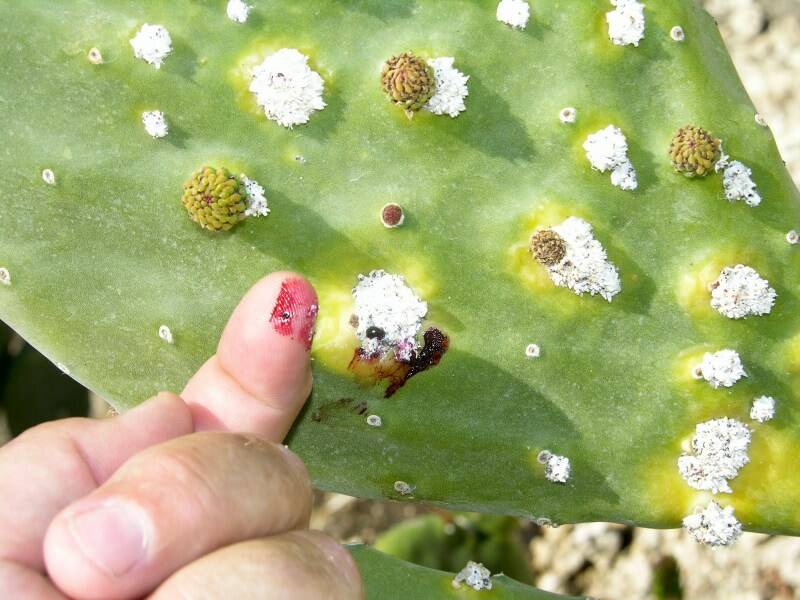 This purple stain is from cochineal scale on beavertail (bunny ears). (Bob Morris)

Q: I found some worms in my hybrid Bermuda grass lawn this year and treated it with worm and grub killer twice. But I have this area that seems to have died. Not sure what it could be and wondered if you had any ideas.

A: You either have not killed them all or this is leftover damage from the lawn worms or grubs. The three most common problems for lawns are irrigation, disease and insects. I first eliminate the easiest to diagnose. The easiest to diagnose are insect problems. Your lawn’s brown area does look like insect damage.

Kneel next to an area that has recently turned brown. Not the center of the old dead brown area but toward the edge. With medium strength, pull on the grass in the green/newly brown area multiple times. Let the green/new brown grass go through your fingers but still pull on it — like you are pulling on your scalp hair. If a few blades of grass lift or come up in your fingers with the roots gone, it is grubs or at least definitely an insect problem.

If it is not an insect problem, then you can figure it is probably a disease. Which one is anybody’s guess. Lawn or turfgrass disease is a fairly common problem, and myriad diseases occur at the same time of year with the same conditions year after year.

Professionals don’t know what disease it is except from experience and repetition. If it’s something they have not seen before or a pattern that is new to them, they send it to a turfgrass pathologist known and trusted for identification and proper treatment.

Watering problems are in patterns usually related to the location of sprinklers. Yours does not look like a recent irrigation problem.

If I were a betting person, I would guess yours is an older (three to more than four weeks) insect problem. Any good turfgrass insecticide should work.

Hopefully, the damage is over, and it will start to mend with water and fertilizer. If you want a large area to mend faster, then get a cup cutter and plug the dead area 18 inches to 2 feet apart with good grass. Water these spots at least daily during this heat until it starts growing again.

Q: A few weeks ago during a brief wind event, a branch of my palo verde tree broke. From the look of the limb and remaining section of the trunk, I think it was more than just the wind that caused it to snap. Is it diseased?

A: It looks like the tree limbs might have had narrow crotch angles — how they were attached to each other. Oftentimes the limbs with narrow crotch angles start to rot at the top of the crotch. When the limb gets heavy or the wind puts extra stress on the limb, it breaks. The limb does not form a strong connection to the main limb or limbs, and the added stress of the wind moving it causes it to break.

Don’t use tree paint. Let the limb or limbs heal on their own, just like a cut on your finger. Clean the damaged area up as best as you can with a sanitized knife.

Q: Can you tell me what is wrong with my beavertail cactus?

A: Two problems I see. The pads are shriveled. This cactus is either not watered frequently enough or the roots have rotted from watering too often. Opuntia from the Mojave Desert, aka beavertail or bunny ears, should be watered thoroughly every three or four weeks.

The best control without pesticides is to hose them off with a strong stream of water. Hosing the pads off lasts about one week during warm weather, and you must do it all over again.

As far as pesticides go, I have heard that Malathion sprays will kill them. If you are going to use a pesticide, hose off the cactus first and then use the Malathion as a spray in the evenings, about seven to 10 days apart, as soon as the pads dry. Pesticides are meant to prevent the scales from setting up house again. Two sprays, a week apart, should be enough.

Q: We are planning to move and buy farmland on the East Coast. We attended a lecture on how to use a soil map but are still confused about how to do it. What do you suggest we do?

A: Figure out which state or location you are considering and get to know the Natural Resource Conservation Service people in that area. They are a public agency, and that is one of their many jobs. They are very knowledgeable.

Soil maps are very complicated for the layperson or farmers to understand. You will need help interpreting them. They will suggest where to buy and, with a little nudge, a reasonable price range to pay.

Q. We had our landscape professionally designed and installed. We are having problems with a Yucca gloriosa and a Black Knight Buddleia. We are watering six days a week, and still the Yucca is getting brown leaves and the Buddleia is struggling.

A. Did you know this particular Yucca is native to the East Coast and not the desert? This means it shouldn’t be planted in full sun in the desert and surrounded by rock. It doesn’t like this type of exposure at all.

To grow this plant well, it needs to be shaded from afternoon sun, the soil improved at planting time and surrounded with a layer of wood chips.

The Black Knight variety of Buddleia is different. It’s Buddleia davidii. Its origin is the cooler and dry parts of central China. I am used to seeing it grown in the Midwest, and I have no experience with it in the desert, particularly hot spots or in direct and full sun. It does well in Hawaii, California, Oregon and Washington, where the climate is less harsh than the Mojave Desert.

It’s in the same category as your Yucca gloriosa regarding its preferred landscape location. Get it in a more protected location of your landscape (protection from afternoon sun) this fall when the weather is cooler.

Never plant during the heat of summer or when the heat is very close. Nearly all plants don’t do well (except for palms and cactuses) when planted during the heat. Plant in the fall or spring when the weather is cooler.

Never water daily except lawns, annual flowers and vegetables. Newly planted trees and shrubs are deeper rooted than those I mentioned and should be watered at the most common every other day during the heat. There should be plenty of water in the soil for roots of bigger plants to use during the heat, and deeper roots prefer it. It’s fine to water daily for the first week, maybe two, to get them established but no longer than that.

There is a Buddleia for the desert Southwest rather than Buddleia davidii; that is Buddleia marrubifolia (notice the species difference). This plant can handle the hot dry desert.

Buddleia marrubifolia has adapted to the dry hot conditions of the Chihuahuan Desert and that’s one of the reasons for its species name difference.