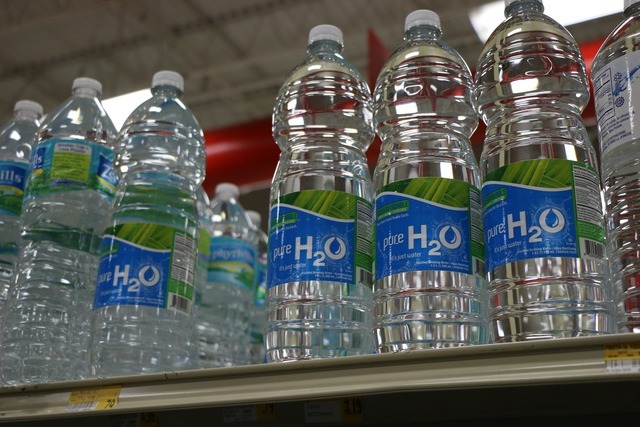 It’s true that drinking water is vital to life. Especially during these hot summer months. But do we really need to drink massive amounts of bottled water?

Many people reason that bottled water is convenient and safer to drink. Besides, who wouldn’t prefer a personalized, chilled bottle of water fresh from mountain springs (or at least that is what the label suggests)?

I remember when growing up, our summers were filled with swimming, ice-cold lemonade and popsicles to cool down. I don’t remember ever drinking water from an individual plastic bottle, yet somehow we survived. Yes, things have changed since then, and some things are easier but not always better.

More than 650 million people globally lack access to safe water. That’s twice the population of the entire United States. Yet, Americans alone go through half a billion bottles of water a week. That’s enough to encircle the planet five times.

While we may feel a bit more secure than developing countries, it is predicted that, just like oil, water insecurity will likely lead to global conflicts. Droughts lead to water shortages and decimated crops. Humans cannot survive without food, which cannot be grown without water.

While population growth, overpumping of ground water and climate change leading to continuous widespread droughts are responsible for most of our present water condition, our obsession with bottled water is one link we can do something about.

How did we get ‘bottled up’?

Perrier was the first company to start selling bottled water to urban professionals in the late ’70s as a niche product. However, lightweight, disposable plastic water bottles didn’t hit the market until 1989.

Two things propelled this forward. The first was the invention of PET bottles, made from petrochemicals (polyethylene terephthalate). The second came after a noticeable drop in market shares for sodas. Pepsi and Coca Cola were motivated to find a new market, and bottled water was their “blue gold.”

We were suddenly enticed by hundreds of millions of dollars of seductive advertising, convincing us to drink more bottled water. And we did. Municipalities that are required to maintain clean, local tap water did not have the marketing budget to compete with these companies.

Now, according to the world bank, the value of the commercial global water market is $800 billion.

How much is enough?

I remember the first time I heard someone site a report stating that I needed to drink eight 8-ounce glasses of water a day. I had visions of blowing up like Blueberry Violet in Willy Wonka and being surrounded by little men singing oompa loompa. It seemed extreme, considering we were doing so well before bottled water.

Apparently the 8 x 8 is a long-standing myth that came from a 1945 food and nutrition board recommendation. While this report was repeatedly sited, an important line in the report was often omitted. It read that “Most of this quantity is contained in prepared foods.”

The Centers for Disease Control and Prevention assures us that there is no need to worry about dehydration, if you are doing three simple things:

2. Drink water when you are thirsty.

Even the Mayo Clinic states, “Although the 8 x 8 rule isn’t supported by hard evidence, it remains popular because it’s easy to remember.”

It’s hard to deny the convenience of a portable bottle of water. In a documentary called “Tapped,” bottled water drinkers are compared to toddlers, constantly needing this bottled source at our finger tips whenever and wherever.

But what is the price for this convenience? Mountains of plastic and endless use of precious resources to continue manufacturing, chief among those resources being water.

Plastic bottles are disposable, therefore tossed shortly after they are opened and emptied (hopefully). Even though plastic bottles are recyclable, they can only be down-cycled as discussed in my recent column.

Even more remarkable, we recycle less than 30 percent of our plastic bottles and those are shipped overseas to China and India and other countries. The plastics that they are unable to down-cycle often end up in their landfills.

Water bottle companies often advertise that bottled water is purer, healthier and safer than tap water. I’m sure that is true in Flint, Michigan, and other problem areas and it seems logical since we pay so much more for bottled water than tap. However, when you compare the testing standards and requirements (or lack of), you get a different picture.

Where does bottled water come from? Many labels are misleading. Brands such as Aquafina and Dasani are bottled from tap water. Even though they have mountain ranges on their labels, inferring that the water comes from mountain springs.

In many cities, Coca Cola, Pepsi and Nestle are pumping public ground water (the same water that flows from our tap) for next to nothing, bottling it and selling it back to us. Recently, after much public pressure, Aquafina finally changed its label to state that the water comes from a public water source.

The Food and Drug Administration does not have control over inspecting bottled water if it is produced and sold within one state. Conveniently, many states have bottling companies within the state. Even those that are sold across state lines are under the jurisdiction of just one person at the FDA.

Additionally, the responsibility of safety testing of the plastic bottles falls on the bottlemakers themselves. And they are not required to submit a regular report to the FDA.

How serious is this?

Whenever there is a terrorist attack, or a mass shooting, the media is all over it. Sometimes there seems to be no end to seeing the same horrible video image looped over and over, or the same sound bite drilled into our memory.

However, something as devastating, as unprecedented as continuous droughts are typically only mentioned when a new, even more frightening study is released or a governor gives a stark press conference in front of dry cracking land. Otherwise, mention of it is often tucked away in a Green Living column in the Your Home section of a Saturday paper.

There are droughts in Northern and Central Europe, Southeast Asia, India, China, Southern Africa and in both North and South America. While Southern Nevada’s drought is heading into 15 years strong, NASA recently stated that the Middle East is experiencing the worst drought in 900 years.

People can change. The increase in sales of reusable water containers indicates that people are starting to think differently. Imagine if 300 million Americans starting drinking filtered or purified water in reusable containers.

A little more awareness of the big picture can help us make better decisions while making simple yet important changes.

Mary Beth Horiai has split her adult life between Japan and Southern Nevada. In Las Vegas, Horiai works for the nonprofit, Green Our Planet. A graduate of UNLV, she was trained as a speaker for The Climate Reality Project and also teaches part-time at College of Southern Nevada. For more information and links to additional resources relating to this column, visit driverofchange.net.