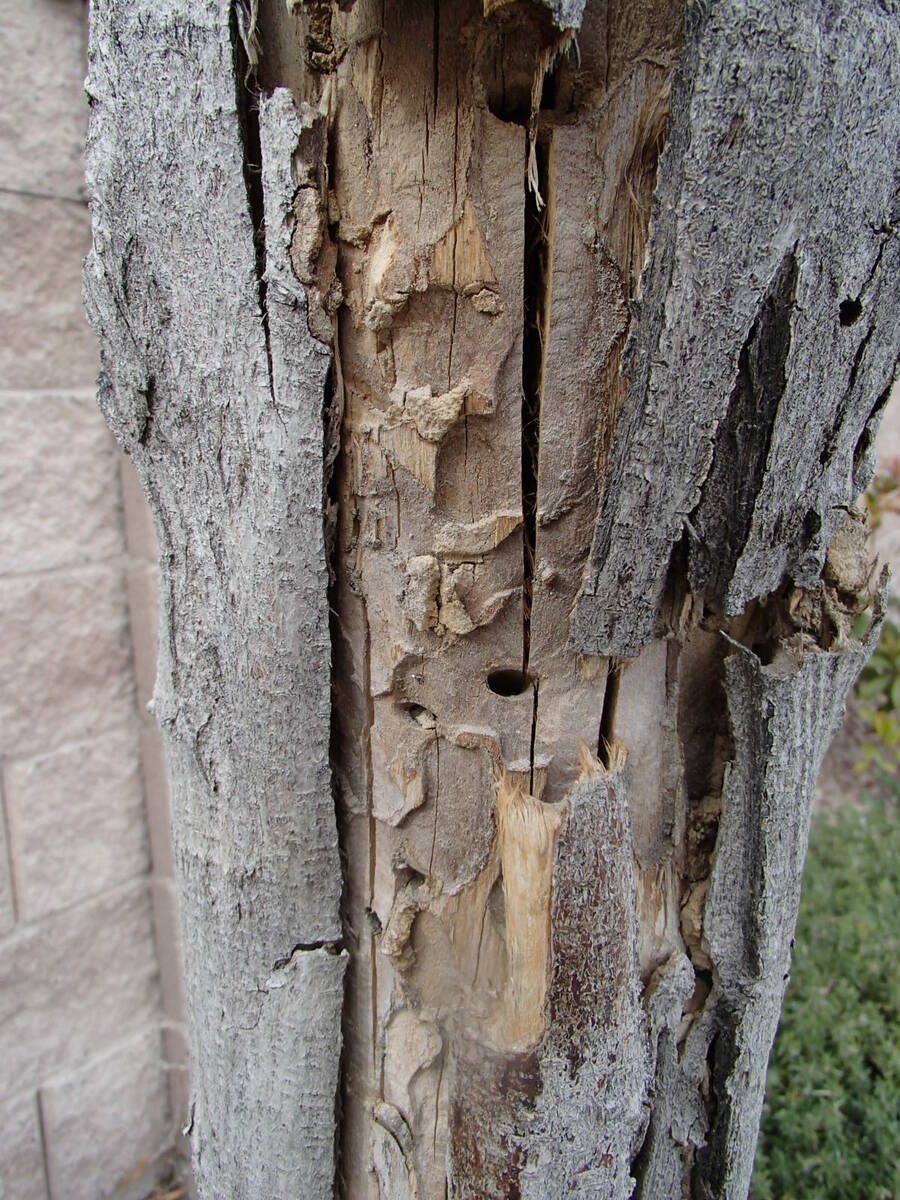 Borer damage can be seen under the bark of an ash tree after a previous sunburn. (Bob Morris)

Q: I have two Argentine giant cactuses bought from a big box store last summer. I planted them in the garden soil after I amended it with sand, pumice and vermiculite to improve drainage. Recently, I saw them with the tell-tale darkening associated with root rot. When the plants were new from the nursery, all branches were firmly set in the pot and upright. Is it usual for the limbs to feel flimsy? Or, are the remaining limbs soon to rot and bend as well.

A: Argentine giant cactus is a sprawling cactus that gets about 3 feet tall. You can read more about it by googling “Argentine giant cactus” and “ASU.” It’s possible to expect erect stems and get sprawling stems instead. Once they are out of their confining container and surrounded by open garden, they tend to sprawl.

It’s obvious to me that your cactus has root rot. It’s either from watering too often or poor drainage or both. In my experience adding too little sand, pumice and vermiculite can cause problems.

Most of our soils benefit from additions of at least 80 percent sand. The vermiculite is another problem. Unlike perlite, it holds water and may make the problem worse. Bottom line, you have to add a lot of sand and use perlite instead of vermiculite if you want to improve drainage.

What to do? If you want to improve drainage for cactuses then plant them higher than the surrounding soil. This type of cactus requires deep but infrequent irrigation. What I mean by that is when you water them, make sure the water gets at least 18 inches deep and don’t water very often, maybe twice during the summer and only once during the winter.

My observations of cactuses tell me when I can water and I don’t use a meter. When their outside skin starts shriveling, it’s time to water. Just like any xeric plant, watering them causes them to grow. If you want cacti to grow, water them more often. If you don’t want them to grow much, then don’t water them as often.

Always make sure that you’re not watering them so often that it causes root rot. I water Opuntia from the Sonoran desert every three to four weeks for fresh vegetable (nopales) and fruit (tuna).

A: These terms usually describe soils but could also be used to describe watering, such as a “light watering.” A light soil is a sandy soil. A medium soil is a soil that has a mixture of sand, silt and clay but still drains water in a few hours to overnight. A heavy soil is a soil that is dominated by clay.

These heavy clay or sticky soils hold water and don’t drain well. Oftentimes planting in these soils is a disaster for xeric plants because of the amount of clay and holding water for a long time. To make a heavy soil lighter, about 90 percent more sand is needed.

The other option is to grow plants higher than the surrounding soil so their roots can breathe.

A light watering is an irrigation that wets the soil only 3 or 4 inches deep. This type of watering encourages lots of shallow roots to flourish and makes the plant less tolerant of hot summers. Shallow rooting oftentimes happens with hose watering.

To water deeper requires watering the same soil about 10 to 20 minutes later but while it’s still wet. This drives the irrigation deeper in the soil and can wet the soil to a depth of 6 to 8 inches.

A deep watering usually requires some sort of moat or donut around the plant to capture the water and cause it to go deeper. A third watering like this frequently doesn’t work, but requires a moat or donut instead.

Drip irrigation can release the water slowly, so it travels deeper. That’s one of the reasons why single emitter, nonadjustable drip irrigation is preferred in home landscapes and raised vegetable beds.

Q: I had Texas mountain laurel planted in my yard since 1998 and have not trimmed it at all, leaving it to look more shrub-like to act as a privacy screen between the golf course and our pool. It blooms profusely, leaving clusters of seed pods. Would the tree benefit from having the pods removed, or is it best to leave them? Would I get more blooms if I trimmed off the pods?

A: Yes, the pods can be removed, and, yes, it makes more flowers when removed, but the trigger for flowering is mostly in the early spring. Many people like the pods formed from the flowers as well. The primary reason for removing the pods is appearance: Some people don’t like their looks. Some do.

Texas mountain laurel is a Chihuahuan desert native plant so it can make a good heat-tolerant, 15-foot-tall hedge after it is established. It would require about 2 to 4 feet of water applied under its canopy when mature.

Remove only crossing branches to give it a full appearance and be careful about “limbing it up.” Let only knowledgeable landscapers prune this plant since it recovers slowly if mismanagement.

Plant them no closer than about 8 feet apart. They are relatively slow-growing so it makes a privacy hedge that will be slow to fill empty spaces between them. Apply a fertilizer like 16-16-16 once in the early spring to get more and bigger blooms. Prune it laterally so that it fills in these empty spaces faster.

Q: Our ash trees have bark drop as they got older. Should I worry that the light tan areas of bark are peeling in long sheets 4 feet long, and this bark seems to be coming away from the tree in small chunks?

A: Worry only if your ash trees had the bottom branches recently removed and they were planted on the south or west sides of a building or wall. Try to leave the bottom limbs attached to the trunk as long as possible so the trunk is shaded by the limbs. Once the tree has gained some height and age, some of the lower branches can slowly be removed.

Your job will be to discover if the trunk has been damaged either by the sun or by borers or both. Before you begin, establish which side of a wall or building the tree was planted on and make a mental note. South and west sides of walls and buildings are the hottest and most damaging.

Next, remove any loose bark including those strips you mentioned. Use your hands first to pull off any loose bark. It won’t hurt the tree.

Finally, use a sharp and sterilized knife blade about 5 inches long to make the trimming cuts to undamaged wood just below the bark. The undamaged wood should be white or light green. The purpose is to hasten the healing either of the trunk or limbs and discover what did the damage.

It’s always a good idea to leave the lower living limbs for shading the trunk as long as possible. This shade helps protect the trunk and limbs from sunburn. Once these areas are sunburned, they will attract boring insects. The burned areas are in the trunks and limbs where there is the most intense sunlight.