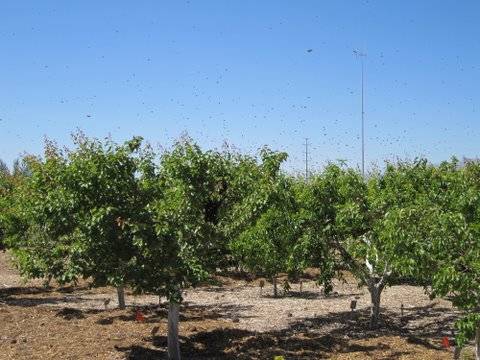 Honeybees swarm fruit trees in an orchard. Never spray a plant that is flowering with anything. That’s a death knell to bees and their colonies. (Bob Morris) 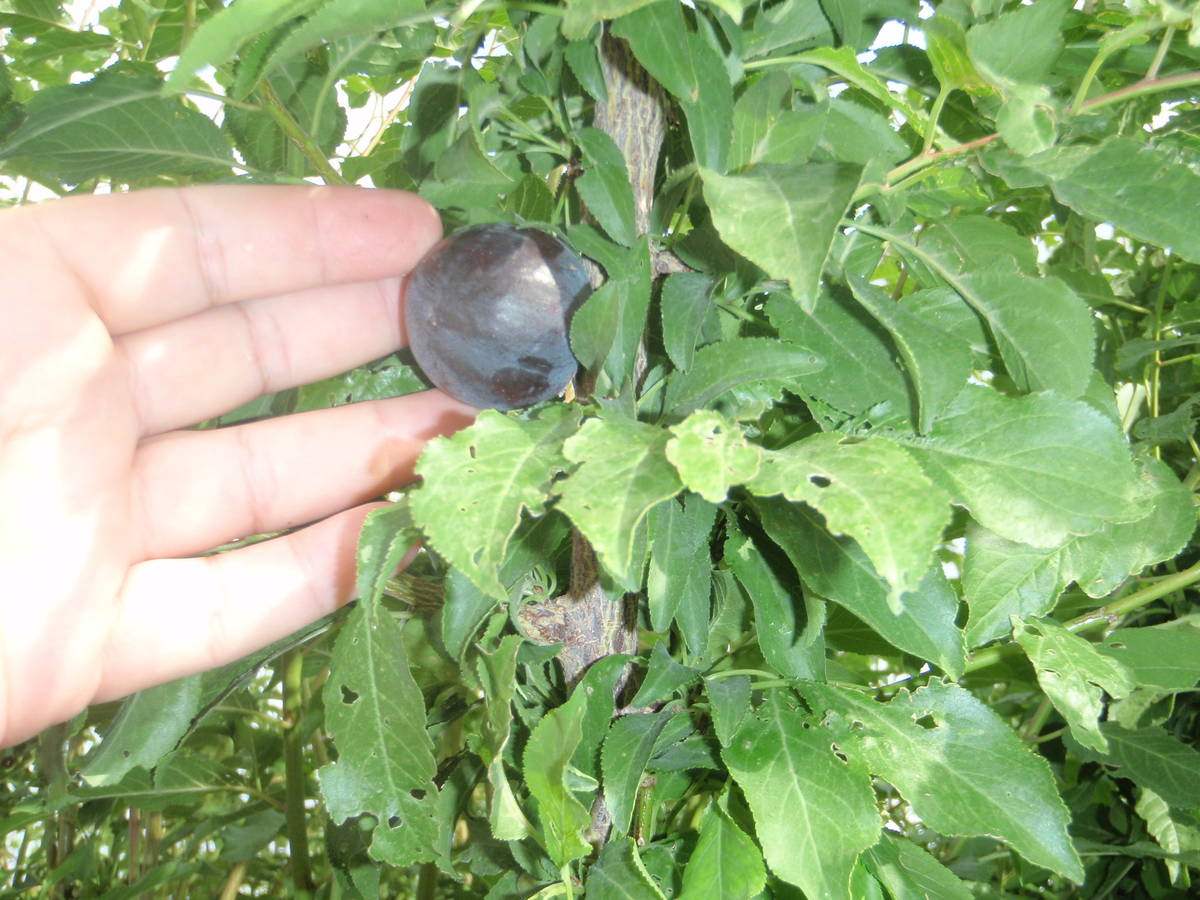 Q: I followed some advice on applying a pesticide to kill borers in my fruit trees and now I learned I am killing the bees.

A: All pesticides are lethal to bees. Even soap and water kill them. Soap and water are used to kill bees when they have invaded home walls, block walls or irrigation boxes.

The major concern is a class of insecticides called neonicotinoids, chemically related to nicotine. They are very toxic to invertebrates, like insects.

The most common insecticide used for home fruit and vegetables, as well as borers in trees, is a neonicotinoid called imidicloprid. In some countries, this insecticide (and others in the same class) have been banned from use over concerns about colony collapse disorder in honeybees. It is not proven to cause colony collapse disorder but is suspected to contribute to it.

Personally, I would not use a neonicotinoid insecticide on plants that flower continuously. Apply it only to a plant that flowers once for a short time but after the plant has finished flowering. This reduces the chance that this insecticide will be transported back to the hive and contribute to colony collapse disorder. It is more of a problem when this insecticide is legally used on continuously flowering plants like tomato.

Q: I have a Honey Crisp apple tree that is 8 years old. I am at a 6,000-foot elevation in Central Nevada. In previous years, our neighbors enjoyed the fruit. This year the fruit got soft and mushy ahead of schedule before I was ready to harvest it. What caused that?

A: Thanks for telling me you are in the Great Basin desert of Central Nevada at 6,000 feet because I am not sure how a Honey Crisp apple performs at our lower elevations of the Mojave Desert. Your climate is similar to Reno and not too far off from the climate of St. Paul, Minnesota, so it should produce good fruit there. If planting a Honey Crisp apple in hot climates be aware that the fruit tree might not perform as well.

All fruits have a specific terroir, like wine grapes, where the plant produces better tasting fruit in some climates versus others. I have never tried to grow it in the lower elevations of the Mojave Desert and was told it would probably not produce tasty fruit in a hot desert climate. The chilling requirement for Honey Crisp is predicted to be 800 to 1,000 hours.

Honey Crisp apple is a cross by the University of Minnesota between Macoun and Honeygold apples that was released in 1991. This hybrid turned out to be a hit in cool and cold climate backyards for the fresh market. It is now the fifth-most- popular apple after Gala, Red Delicious, Granny Smith and Fuji.

The dried fruit beetle is a pest of fresh fruit and causes ripening fruit to become mushy ahead of schedule, but close to harvest time. Dried fruit beetles like figs a lot and cause the souring of this fruit because of a yeast contaminant carried on their bodies that infests the fruit after attacking it. This attack and yeast infection cause the fruit to taste vinegary and mushy.

The solution to this problem is quite simple; pick up fallen fruit from the ground and never leave leftover, damaged fruit on the tree. The dried fruit beetle prefers fresh fruit or freshly fallen fruit and breeds there. These offspring build in numbers and attack fresh fruit in larger numbers. Soon you have a rotten fermenting mess on your hands year after year.

In my experience, simply composting fresh fruit fallen on the ground doesn’t always work. The collected fruit should be put in a container with a lid so the adult fliers can’t escape.

For a large orchard with lots of fruit trees, I put the fruit in a 55-gallon plastic drum with a lid where I let it rot and then compost it when rotten and mushy.

Q: What are these white creepy crawly bugs on my hibiscus plant? I think they are hurting it. If so, how do I get rid of them?

A: These are mealybugs.

Mealybugs flourish in tropical countries during rainy periods and high humidity. I have commonly seen them on both kinds of hibiscus (tropical and temperate) during rainy periods or when the humidity is above 50 percent. They cause a lot of plant problems and spread disease in humid regions if not controlled because they are, like aphids and whiteflies, sap feeders.

They can be a regular insect problem for greenhouse growers and interior plant people where the humidity is oftentimes higher. They are usually brought in on dirty plants, and these plants serve as insect spreaders to other plants. So being vigilant is an important control measure.

Control is simple but can be tedious for the nonpesticide user. Mealybugs like to hang out in colonies or groups, so spot treatment is often recommended rather than treating all the plants. Alcohol on a cotton swab works well, and oils used as a pesticide helps control them, as well as insecticidal soaps applied every few days. Otherwise just about any insecticide spray labeled for mealybugs will get rid of them for longer periods of time.

Q: My Santa Rosa plum tree that I planted 20 years ago, got the borer infestation and is almost dead. About a year and a half ago a sucker grew from the base of this plum. A small limb developed and in the last two months we got some fruit from it that looks like peaches and not plums. Should we keep it? Will they be good to eat?

A: The sucker grew from its base, the grafted rootstock of that tree. Peach trees are sometimes used for grafting to Santa Rosa plum. There are three peach rootstocks used for grafting onto plums: Nemaguard, Lovell and Citation. The other two (Mariana and Myrobolan) are plum rootstocks and the fruit produced would be plums.

All three of these peach rootstocks produce lousy tasting peaches, but they are a peach. Get rid of the tree. The top (scion) died and left the rootstock to sucker. The rootstock will produce peaches because it was a peach.

Borers don’t live in the soil. But root rot and collar rot diseases do.

If that had been a Myrobolan plum rootstock then keep the sucker growing if you like the flavor of the small tart fruit. You can buy something similar called a cherry plum (Sprite or Delight, aka Prunus cerasifera). Cherry plums are very good for flavoring sorbet, jams and jellies. Myrobolan plum is high in sugar but very tart, because of its high acidity, but very flavorful.

Q: When I moved into my new house six years ago, my landscaper put in 10 bottle trees along with a water feature that had a waterfall. I had him attach a soft water line for filling the water feature so the rocks don’t get white. He inadvertently connected my backyard sprinkler system to the soft water. I have been watering with soft water for five years and didn’t realize it until now. My bottle trees are dropping leaves and have dead branches. What about all that salt in the soil? How do I get rid of it?

A: The usual salt used in water softeners is table salt. Table salt contains sodium and chlorides, both chemicals are toxic to plants, but they can be washed from the soil quite easily with better quality water that contains fewer salts. Irrigation with tap water, not softened water, is all that is needed. I would guess that the excess salt will be reduced to safe levels in about two or three months of normal watering.

Install a hose bib for watering plants from the irrigation main line or submain. A more plant-friendly salt to use would be potassium salts made for water softeners. They cost more but are less damaging to plants.

I hope you have a big landscape. Bottle trees grow to about 50 or 60 feet in height with an equal spread. That’s a lot of bottle trees. They should be planted no closer than 30 feet apart and located 40 to 50 feet from a two-story house.