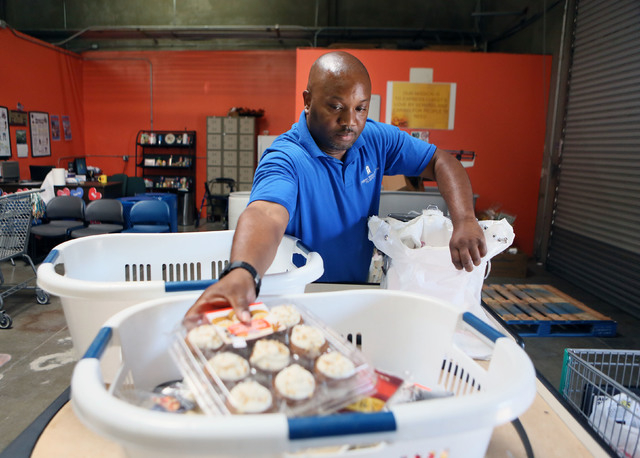 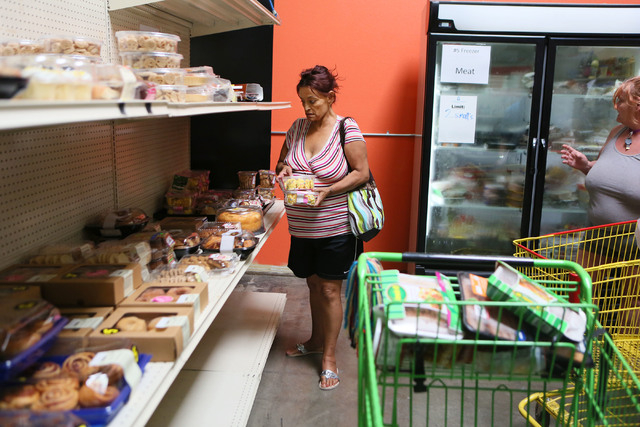 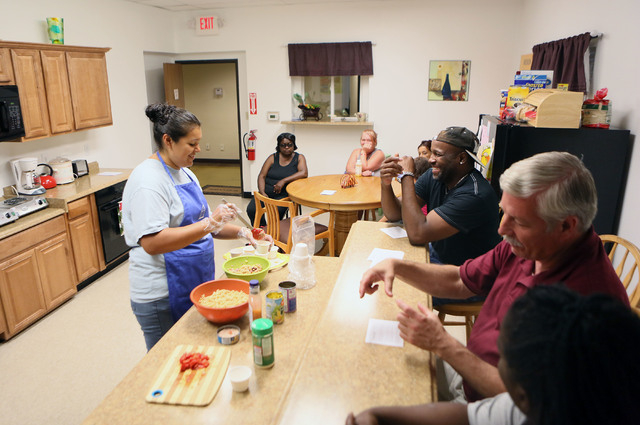 Marisa Cervantes (cq), left, Family Education Empowerment and Distribution program manager, prepares a whole wheat pasta salad during the Nutrition Education Class at the Lutheran Social Services of Nevada Friday, May 30, 2014, in Las Vegas. The Lutheran Social Services of Nevada offers several programs for those in need including a food pantry that is open Mondays, Wednesdays and Fridays from 8-11 a.m. (Ronda Churchill/Las Vegas Review-Journal) 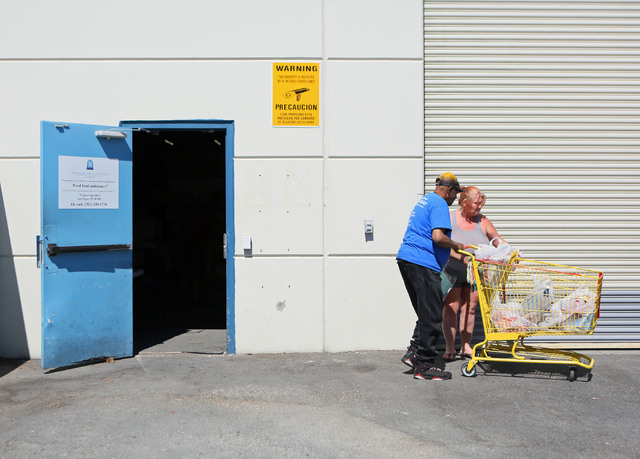 Yet it might as well be written in ancient Mesopotamian.

“We gotta come earlier than this; hell, I’ll come at 6,” says a woman around 7:45, as her male companion swivels around to scan the scene just off the corner of Sunrise Avenue and Spectrum Boulevard.

“It’s 40 people before you even get to the corner,” he says, evaluating the line that disappears around the back wall of the building, where 40 or so more are idling, some patiently, some not.

All are waiting for the Lutheran Social Services of Nevada food pantry to swing open the door that bears the widely ignored sign.

They are black, white, Asian, Latino, Middle Eastern. They are young, old, middle-aged. One woman in a Sonic Burger visor and T-shirt corrals a toddler wandering away from her side while she props up an infant fidgeting in the crook of her arm. Another woman channels her restlessness into rocking the cart she has brought to stock up.

Finally, the door opens, sign-ins begin and people shuffle forward. After slipping in, one man slips out again, exasperated. “Absolutely no place to stand,” he says, to no one in particular. “And sitting is out of the question.”

Welcome to Mondays, Wednesdays and Fridays — from 8 to 11 a.m., at least officially — at this human outreach hub.

“We just added that sign,” says Derrick Felder, the service’s marketing and development director. “But when we look at the (security) cameras, we’ve had people come here at 12:30 or 1 o’clock in the morning to make sure they’re getting served.”

Until April, people younger than 60 were limited to one visit every two months, but that has been changed to welcome everyone once a month.

“If people are willing to get here at 3, 4 or 5 o’clock in the morning and stand in line, chances are they need that food we’re providing,” Felder says. “If they walk through that door and sign in, we’re going to get them taken care of.”

All faiths are welcome.

”We don’t check Lutheran cards at the door,” Felder, a Baptist, says with a chuckle, noting that Mormons, Jews and Catholics are part of the 11-person staff of the organization, which has bounced among locations since 1985 and runs on money from foundations, private donations and county and state funding.

“We work with the Missouri Synod, the Wisconsin Synod and the Grand Canyon Synod; they govern the Lutheran churches here,” Felder says. “The churches in those synods do donate and help us do our mission.”

During overall hours — 8 a.m. to 4 p.m. Mondays, Tuesdays, Wednesdays and Fridays — several other programs contribute to that mission, such as “family stabilization services.” Struggling individuals and families are offered financial assistance for rent and utilities. Those needing housing are connected to appropriate agencies and are aided in obtaining work cards, birth certificates and other ID forms. Job-seekers can use the center’s computer lab to search and apply for employment online, and get bus passes so they can ride to interviews.

“A lot of times they are in crisis mode because they’ve had a certain lifestyle and something happened and they had to sacrifice that,” says Cherry Richardson.

The client services manager, Richardson notes that clients sometimes complain about the location of housing the organization helps them find.

“We tell them it’s temporary, that they need a roof over their head to get stabilized, and then after three to six months, after they’ve saved some sort of nest egg, maybe they can move to somewhere else they want to be,” Richardson says.

“We’ve experienced the same things our clients have, and to some degree we’ve been in their shoes. We can empathize with what they’re going through.”

Felder recalls his own background, abandoned along with two sisters by his mother when he was 11 years old in South Carolina, accepting food from compassionate strangers. Felder “had to grow up quick, and I wanted to make sure that when I was in the position, I could help other people.”

One person, a deaf man from New York who wound up stranded in Las Vegas, particularly touched him.

“It hit me a little hard when I saw his struggle,” says Felder, who had to break through communication barriers by exchanging notes with the man, discovering he wanted to return to New York.

After bringing the man fresh clothes — “he just happened to be my size,” Felder says — he worked with The Salvation Army and the PATH program (Projects for Assistance in Transition from Homelessness) to get him a ticket back home, then located and phoned the man’s friends who could meet him at the bus station there.

“They’d lost track of him; they couldn’t find him,” Felder says. “You could almost hear the tears rolling down and hitting the floor.”

Another program, the Angels of Care, provides nonmedical home care for seniors and the disabled. Services include light housekeeping, meal preparation, food shopping, picking up medications, helping people in and out of the shower and wheelchairs, and grooming assistance.

“Sometimes you’ll go into the home and you’ll find these elderly people are alone, they don’t have family members, they might not have food in their refrigerators or they haven’t groomed themselves in a long time,” says Gwendolyn Wilson, the program’s implementation manager.

“Some of the situations, it’s like, ‘Oh my God, they need somebody to come in and show that they care.’ You’re there when no one else cares.”

However, the jewel in their humanitarian crown is the food pantry. Centerpiece of the FEED program, standing for “Food, Education, Empowerment and Distribution.” That’s a partnership with the Three Square Food Bank, Fresh &Easy stores and Wal-Mart Neighborhood Markets.

Within the building’s warehouse is a mini-supermarket, aisles lined with canned goods, fruits and vegetables, meats, bread, soda, juice, milk, even some junk food.

“We don’t hand them a box or a bag of food; they get to pick out the food they want themselves,” Felder says, pointing out the weigh stations where clients check out, with a standard allowance of 10 pounds of food per person, per household. “The best part is that the perishables don’t count against their weight, so a family of five can get 50 pounds of the staple items, but they can leave with up to 150 pounds of food.”

“They’ll say to me, ‘You can take more.’ And I’ll say, ‘I don’t need more. I don’t’ want to be greedy.’ You just take the things you need to tide you over. Everybody should get a little share. You have to think of others in your situation. They are here to help the entire community.”

“Most of these are older people, so I make sure I get their basket, take them to their cars and help them empty the baskets, because most of them can’t,” says Billy King, who once was one of those shoppers. “No one’s arms can reach God. I tell them: ‘Your job is done. Now it’s my job.’ The Man sees everything, and it makes me happy to help them.”

Brief nutrition classes are offered on shopping days. In a cozy kitchen/meeting room around the corner from the pantry warehouse, about 15 people squeeze in for a lesson in nutrition and smart, health-conscious cooking before they roam the aisles for ingredients.

On this day, Marisa Cervantes, the FEED program manager, offers tips on spotting low-sodium alternatives, cautions about products loaded with sugar, whips up some glazed tomatoes and green beans, pulls out a platter of fresh chicken nuggets — the crust baked, not fried — and hands out samples.

“They’ve gone to other pantries where they just wait in line to get food, so this is new to them,” Cervantes says. “We try to steer them away from processed foods. It’s little tricks to make their meals healthier, because we have a lot of clients with high blood pressure, diabetes and health problems in general. I had a couple of people in today who came just for the class, not even to shop. That’s nice to see.”

Next pantry day, people will once again queue up outside, no doubt hours before they should, disregarding that silly sign. Staffers won’t object, given that they pay more heed to another sign, posted inside the Lutheran Social Services building:

For more information on Lutheran Social Services of Nevada, call 702-639-1730 or visit www.lssnv.org.