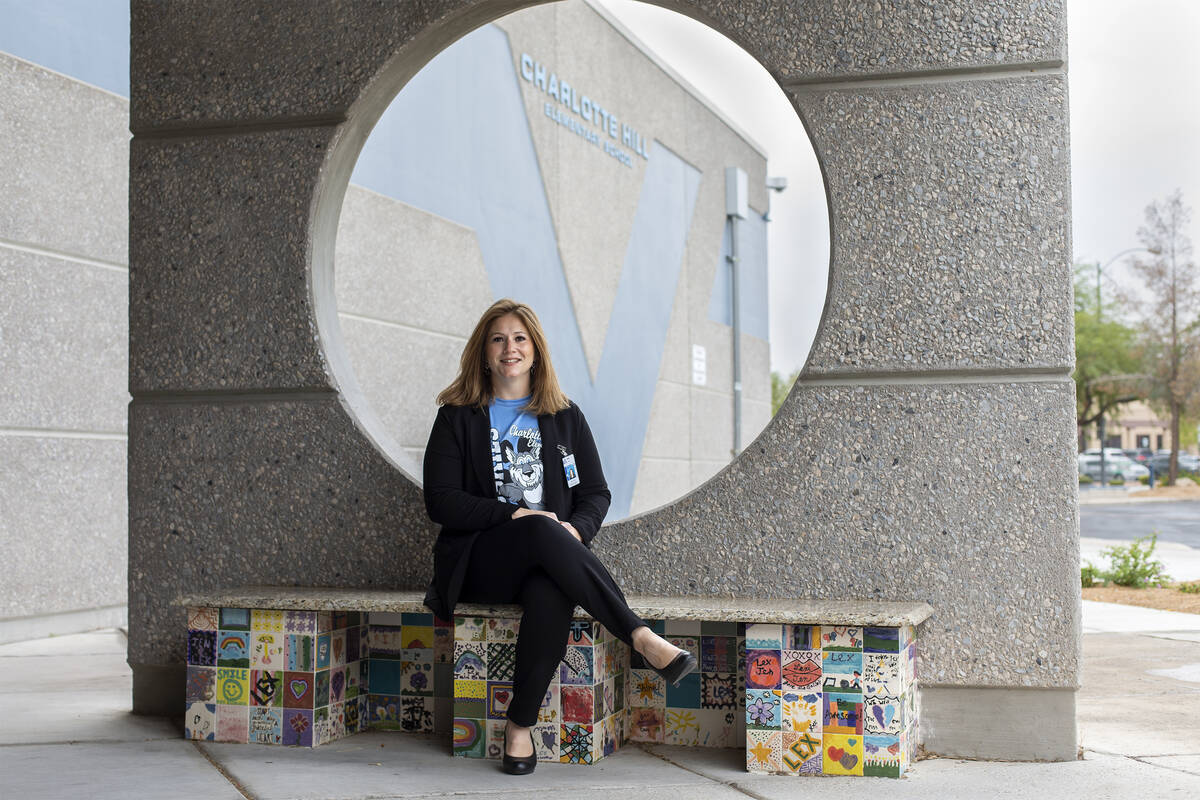 Jennifer Reynolds, principal of Charlotte Hill Elementary School, sits for a portrait outside the school on Friday, Oct. 8, 2021, in Las Vegas. The school was one of three in the Clark County School District to be named a National Blue Ribbon School. (Ellen Schmidt/Las Vegas Review-Journal) @ellenschmidttt 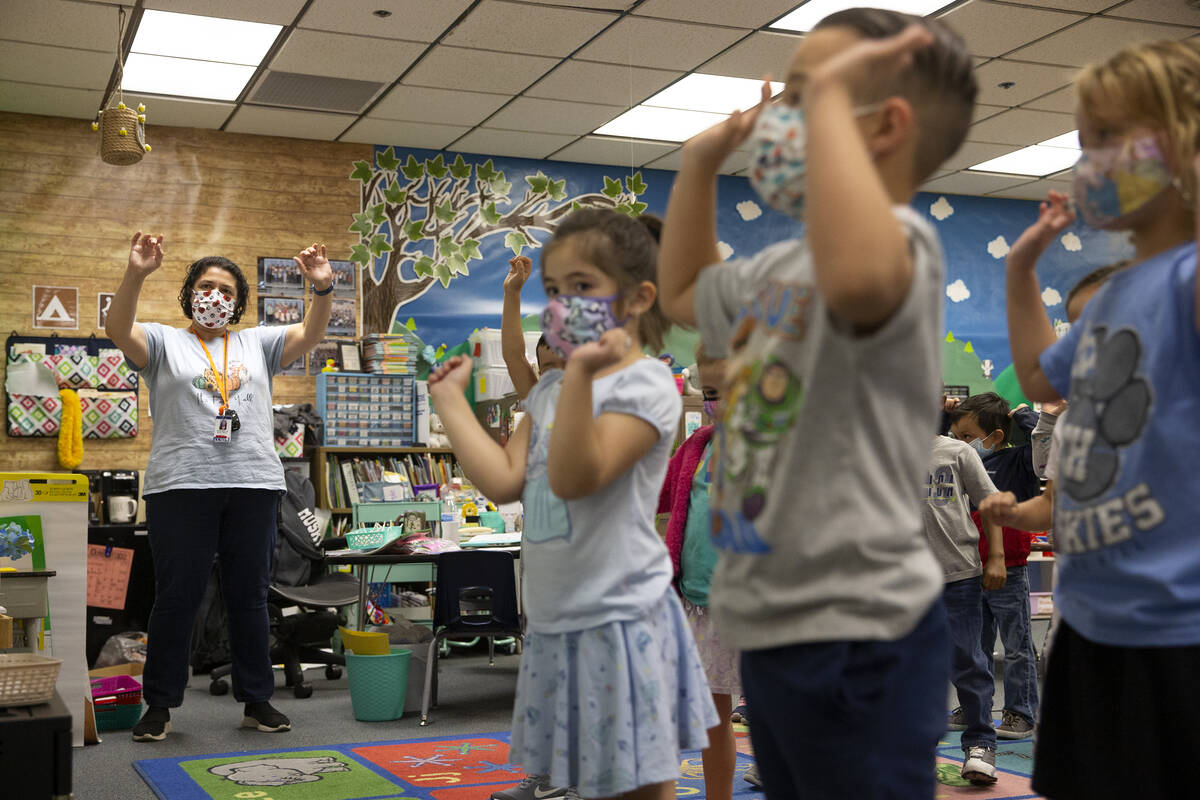 Kindergarten teacher Annabelle Pagliaroli, left, leads her class in an active, verbal alphabet exercise at Charlotte Hill Elementary School on Friday, Oct. 8, 2021, in Las Vegas. The school was one of three in the Clark County School District to be named a National Blue Ribbon School. (Ellen Schmidt/Las Vegas Review-Journal) @ellenschmidttt 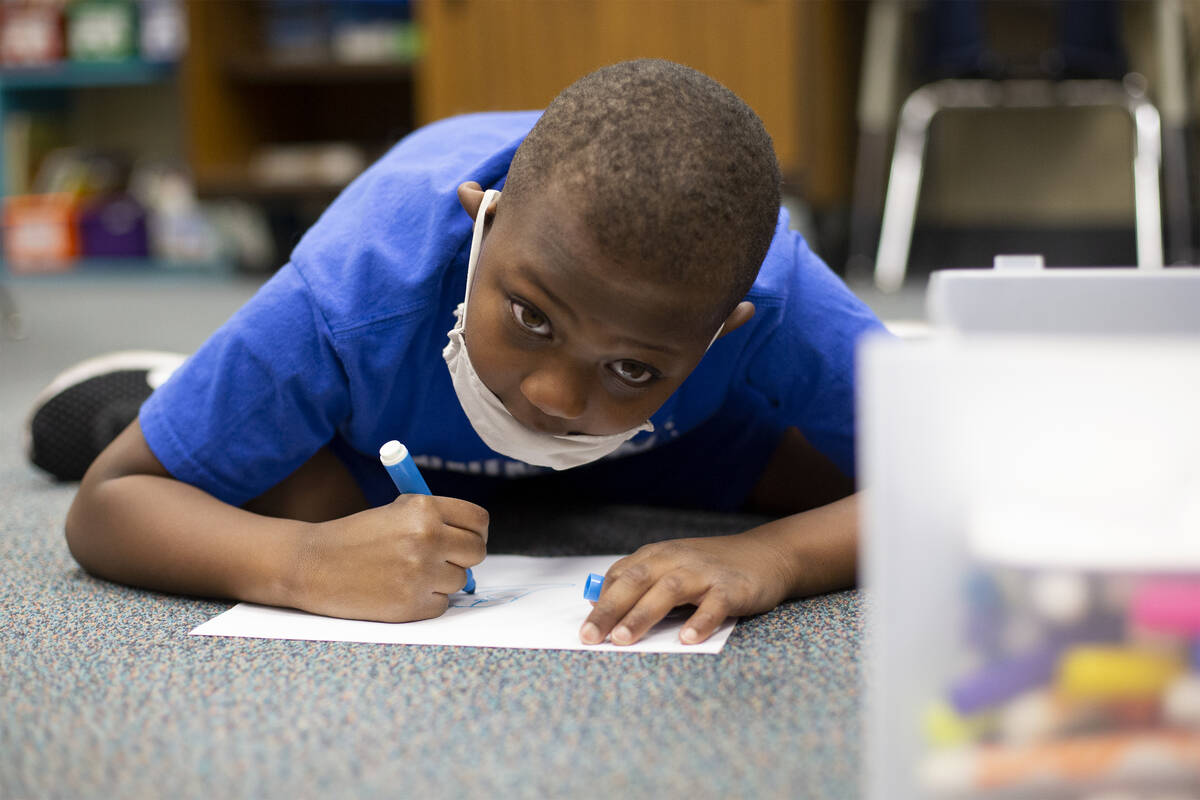 First grader Miles Strauss takes a coloring break during his schoolday at Charlotte Hill Elementary School on Friday, Oct. 8, 2021, in Las Vegas. The school was one of three in the Clark County School District to be named a National Blue Ribbon School. (Ellen Schmidt/Las Vegas Review-Journal) @ellenschmidttt 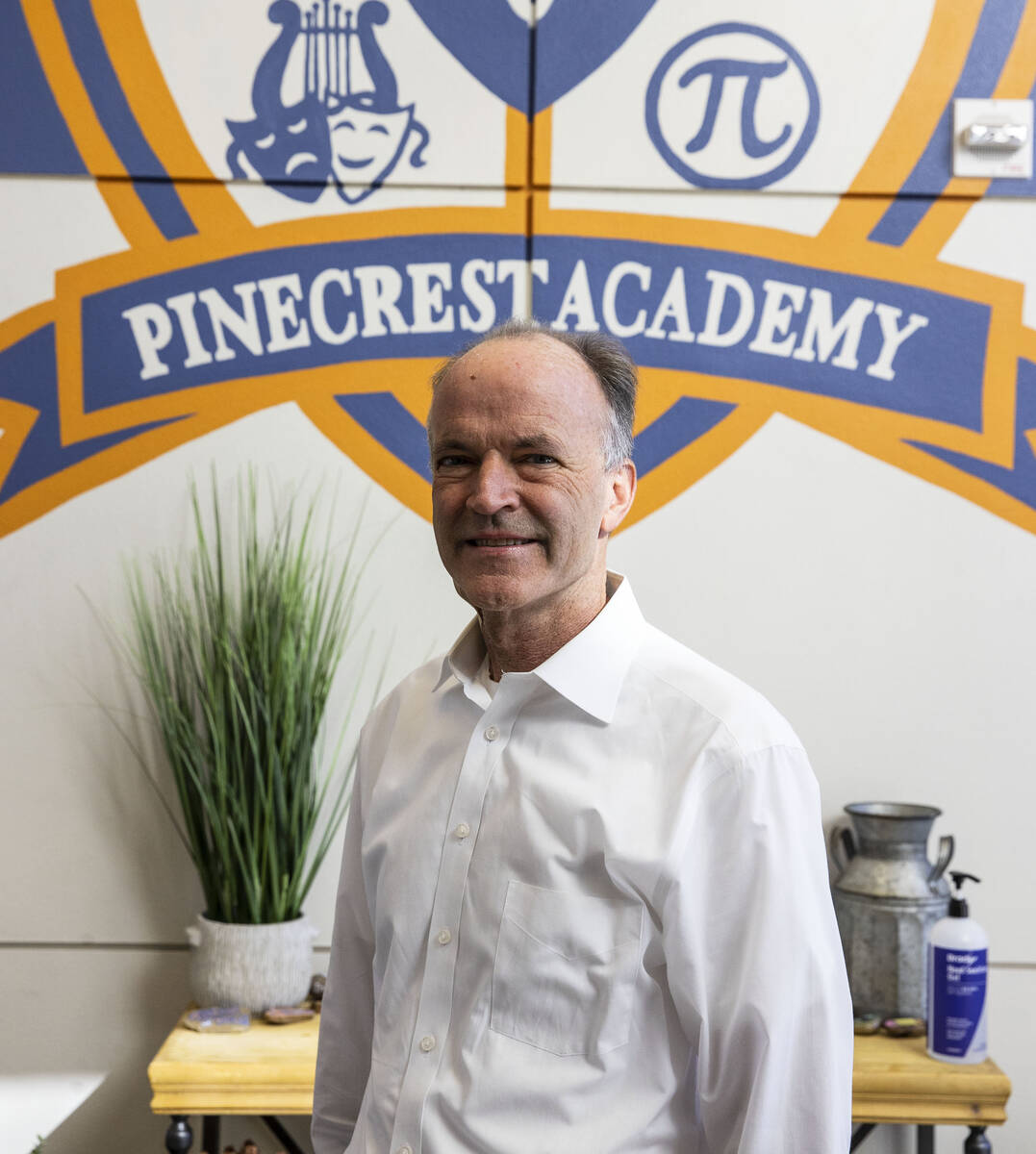 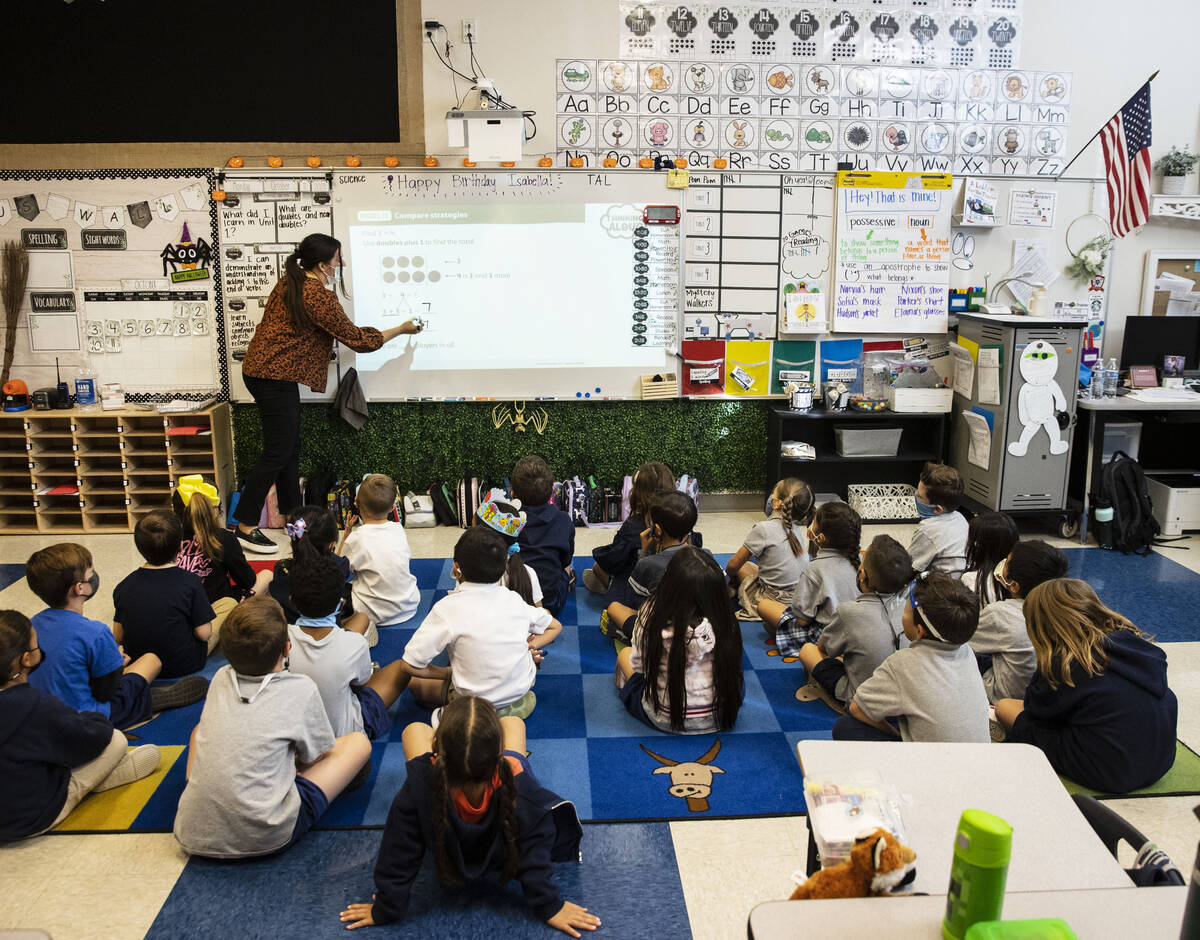 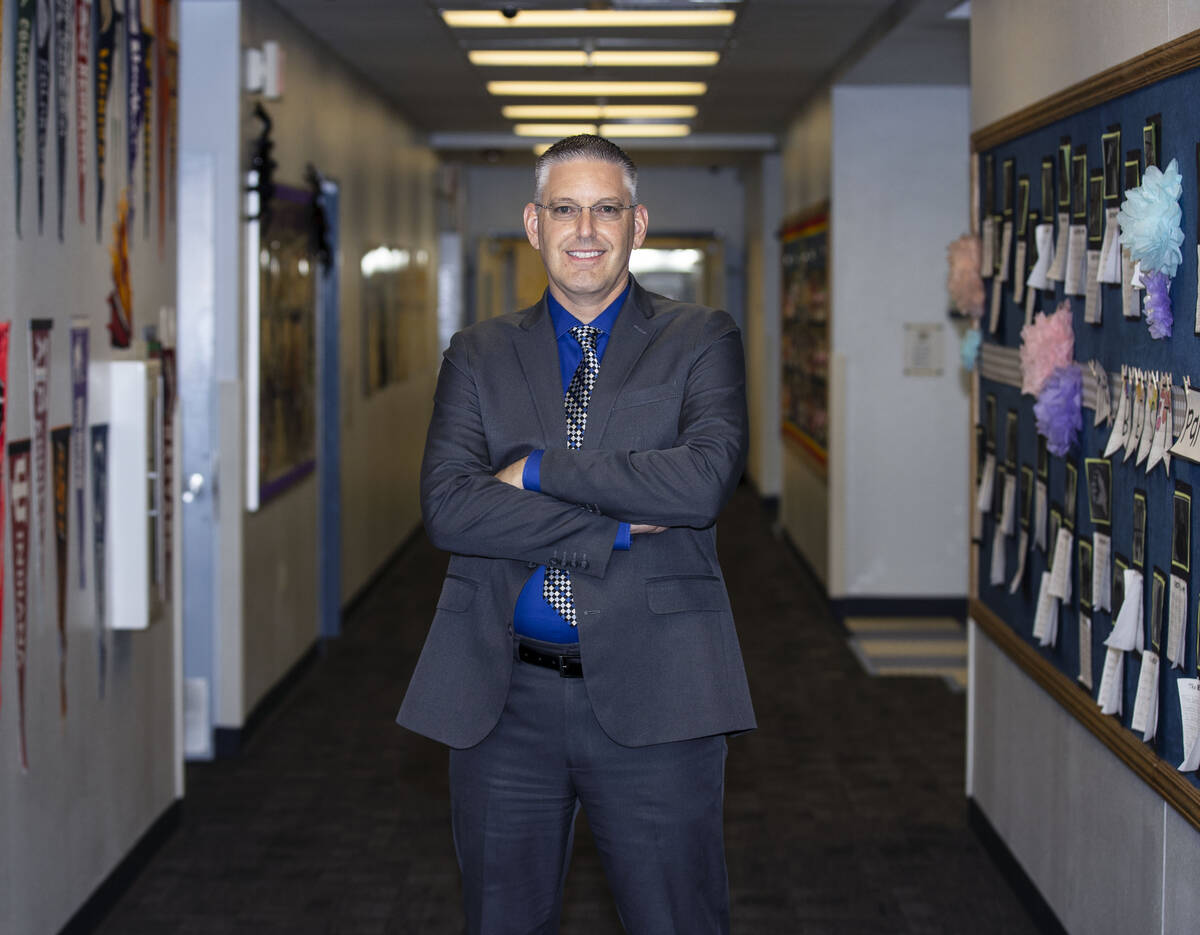 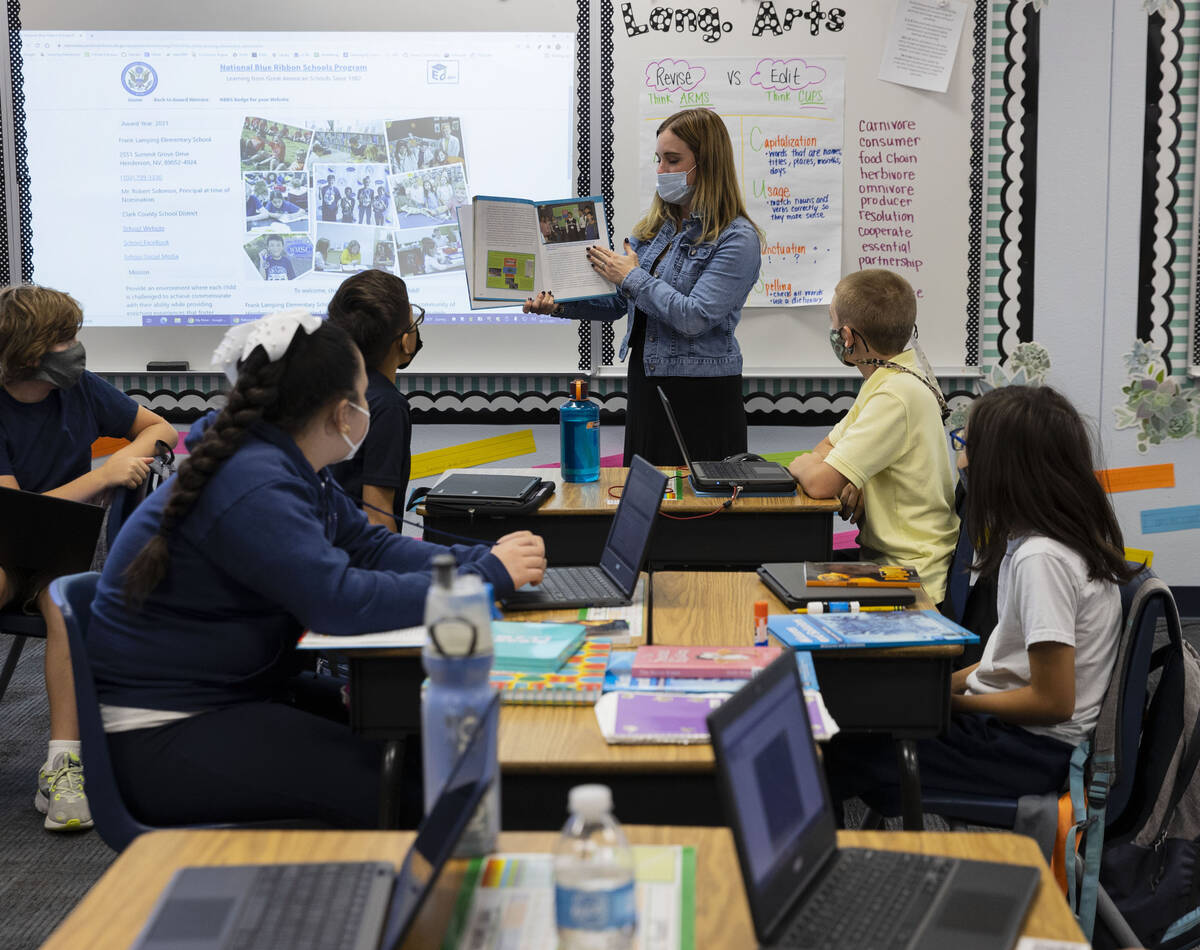 Receiving a National Blue Ribbon Schools award is a point of pride for three Clark County schools recognized this year.

The award, given out by the U.S. Department of Education, is based on student academic performance. The agency announced 325 school honorees last month after poring over nominations submitted by state education officials.

What’s the significance of receiving the award and what did the schools accomplish to get to this point? Here’s a glimpse inside the three local schools recognized this year:

Pinecrest Academy schools have a “strong history of academic success,” said Rebecca Feiden, executive director of the Nevada State Public Charter School Authority, in a statement via email to the Review-Journal.

“I am thrilled for Pinecrest Inspirada to be the first Nevada charter school to receive this honor, it is certainly well-deserved,” she said.

The Inspirada campus has been designated a five-star school — the highest possible ranking — for five consecutive years under the state’s accountability system. The ratings have not been updated since the 2018-19 school year because of the COVID-19 pandemic.

Michael O’Dowd, principal at the campus since 2016, said he’s thrilled the school was recognized with a National Blue Ribbon Schools award. He said it has been a lifelong career goal for him to be principal at a school that earned the award.

O’Dowd, who has spent 33 years in education in Clark County, was previously principal at Lamping and Wallin elementary schools, both CCSD schools in Henderson.

Pinecrest’s Inspirada campus opened in 2015 and serves nearly 1,200 kindergarten through eighth grade students who hail from 23 Clark County ZIP codes. Last school year, about 12.6 percent of students qualified for free or reduced-price school meals, according to a state report.

At Pinecrest Inspirada, instruction is provided at each student’s ability level and educators push all students regardless of whether they’re behind, at or above grade level, O’Dowd said.

At the elementary school level, there’s a “power hour” each day where students are grouped by readiness level, O’Dowd said. Teachers who are best suited in a particular subject area or with a certain group of students work with the group that’s the best fit.

The Inspirada campus also infuses STEM (science, technology, engineering and math) into all of its subject areas, including reading, so the disciplines are not taught in isolation, he said.

Christine Grismanauskas, a sixth-grade English language arts teacher who has been at Pinecrest Inspirada for six years, said the National Blue Ribbon Schools honor has reinvigorated employees after a hard year during the pandemic.

She said the award was a genuine surprise, noting that teachers and schools don’t always look for accolades, and their reward comes from helping students and seeing their achievements.

At Pinecrest Inspirada, teachers work collaboratively together, Grismanauskas said, adding that doing what’s best for students — a mantra she hears frequently from O’Dowd — is at the forefront when planning lessons.

Pinecrest’s Inspirada campus is part of Nevada’s public charter school system, which has seen growth in student numbers — as well as additional campuses — in recent years.

Pinecrest Academy’s Las Vegas Valley enrollment has grown from 4,069 students during the 2017-18 school year — when there were four campuses — to 6,891 this school year with five campuses. The Sloan Canyon campus opened in 2019.

Hill Elementary in Las Vegas has about 480 students and demographics are similar to Clark County as a whole, said Principal Jennifer Reynolds, who has been at the school since 2015 and has led it for four years.

It’s a Title I school, meaning a large percentage of students live in poverty, and about 77 percent of students qualify for free or reduced-price school lunches.

Hill Elementary educators want all students to receive quality instruction and they strive to address any aspect of a child’s learning where they need support, including social-emotional needs, Reynolds said.

“Achievement is so important, but you can’t get achievement if you’re not meeting the needs,” she said.

The school has shown growth in both English language arts and math among subgroups of students, Reynolds said, noting there was more growth in English.

Historically, Caucasian and Asian subgroups of students have logged higher scores, she said. “At Charlotte Hill, we’ve closed that gap. We’re brought all students up.”

Reynolds called the Blue Ribbon award “an honor,” saying that it “represents the hard work and commitment of our staff and students.”

Reynolds said she’s happy the hard work that staff, students and parents have put into supporting “our goal of the whole child and student achievement” is paying off.

She said she’s also excited elected officials have expressed interest in visiting the campus. “I think it’s important for people who are making important decisions to come to individual school sites and really see what’s going on.”

Hill Elementary learning strategist Dolores Khennavong, who has been at the school since 2017, described the campus as having a family-like atmosphere where the focus is on what’s best for children.

“We’re proud of the fact that we’ve been able to work together collaboratively as a staff,” she said.

Everyone is an expert at something, and teachers are willing to share those strengths and practices with their colleagues, Khennavong said.

Receiving the Blue Ribbon award was an exciting moment for employees, all of whom have been working hard to ensure children are learning throughout the COVID-19 pandemic, Principal Robert Solomon said.

Being recognized nationally “brought a great level of joy,” he said, and was a way to recognize educators, students and the community.

The school was recognized for closing achievement gaps, which has happened over a number of years with all subgroups of students, according to Solomon, who has been principal at Lamping for 13 years and before that was a principal at a different school district campus for five years.

“Making progress and growth doesn’t happen by accident,” he said. “It happens by design.”

Performance data is analyzed to understand where students are and where intervention is needed, Solomon said.

The school also recently designed and implemented specific interventions to assist with closing the achievement gap for Black students and English language learners.

Lamping Elementary, which has about 650 students, is home to the William McCool Science Center — one of the few school district campuses with a dedicated facility to support teaching science to elementary schoolers.

Lindsay Cabusao, a fifth grade teacher at Lamping, said the science center provides hands-on experience for students and brings in components of other subject areas as well.

She said it engages the students in a unique way that prepares them for the future. “They have to use problem-solving skills in addition to core content knowledge.”

Cabusao, who has been at Lamping for three years, said the school has a high level of parent involvement, also noting it’s a highly sought-after school where teachers want to work and parents want their children to attend.