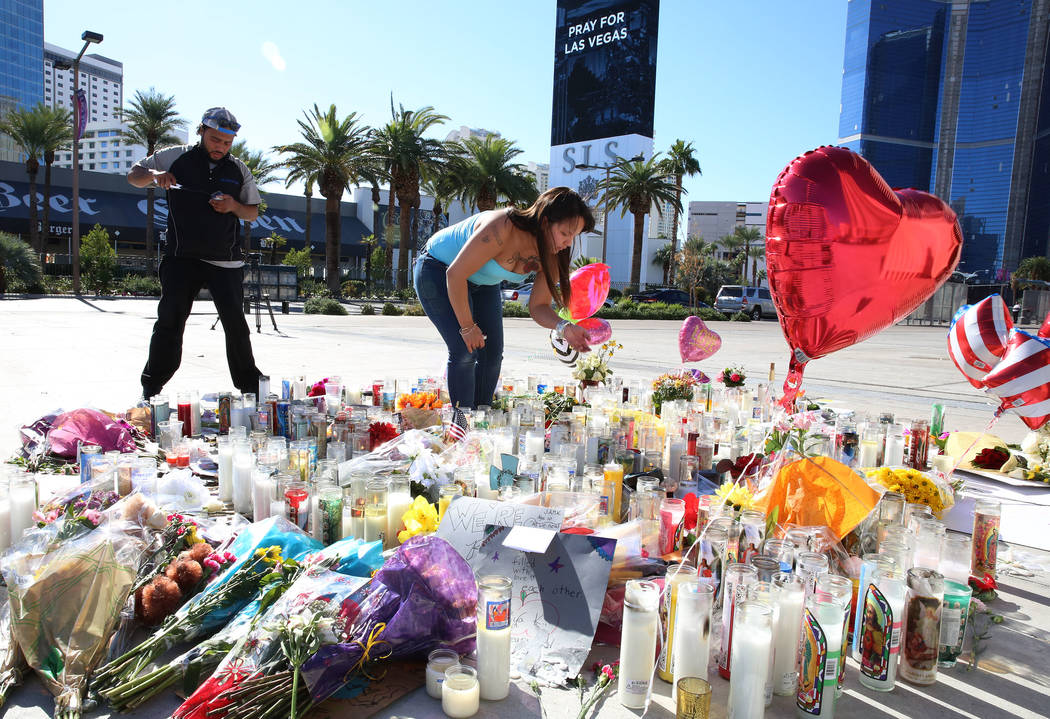 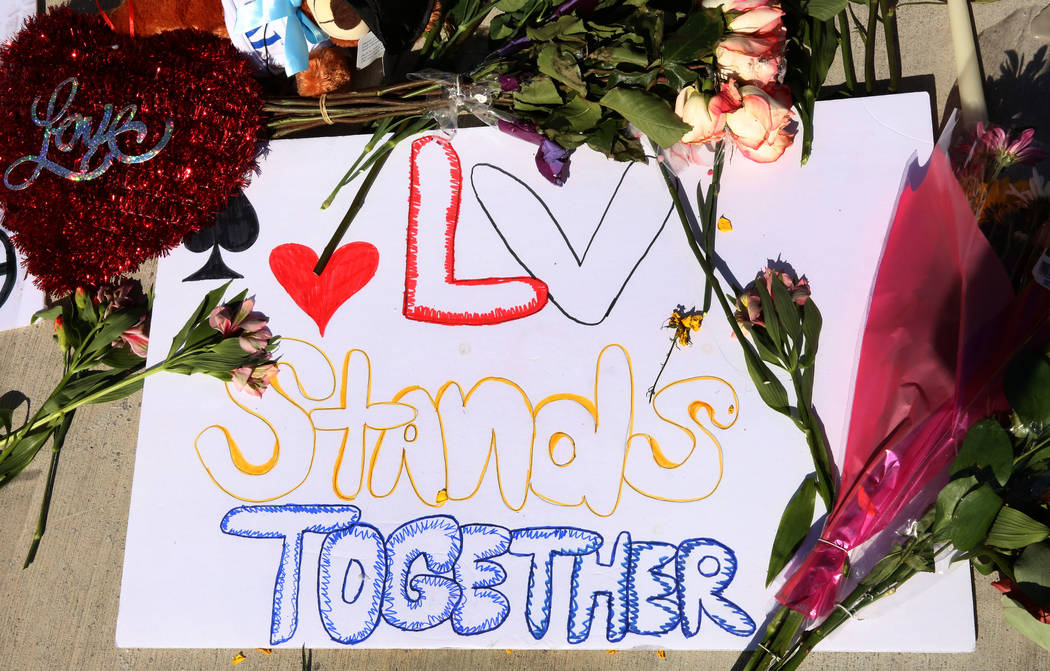 Flowers and a poster are placed at a makeshift memorial for the shooting victims at the corner of Sahara Avenue and Las Vegas Boulevard on Tuesday, Oct. 3, 2017, in Las Vegas. Bizuayehu Tesfaye Las Vegas Review-Journal @bizutesfaye

Students in Clark County are like adults when it comes to Sunday’s horrible bloodbath in Las Vegas: They’re grappling with questions that may have no answers.

A good portion of every U.S. history class that Robert Cowles has taught at Rancho High School this week has been dedicated to discussions about the mass shooting at the Route 91 Harvest country music festival.

“They’re somber. They’re very reflective, especially right now. Honestly, I think they’re handling it better than I am,” Cowles said. “They’re not afraid but they’re also not quite OK either. They’re upset but they’re not upset in fear.”

Students brought more questions on Tuesday than on Monday, Cowles said, suggesting they’ve had more time to process and parse the information.

Cowles said many of his students watched unfiltered videos of the shooting on social media. Others were reading rumors and questioning whether they were true, including one about a second shooter. It’s provided a teaching moment on how to make sense of information online and how to verify and vet sources.

As a teacher, Cowles says his role is to try to put the events into perspective. And just like a parent, it’s important to listen and provide a safe space for discussion.

“Part of it is putting it in perspective, because that’s what we’re there to do,” he said. “Listen to what they have to say, talk with them, don’t try to hide anything from them but don’t let them get hit with it full on either.”

Children as the guide

And that’s exactly how experts advise parents handle questions about traumatic events from students of all ages.

Parents and caregivers should model good behavior, as children of all ages take their cues on how to behavior from adults, he said.

At one point Monday, Brock said he walked away from television coverage of the event because it had become repetitive. His son saw that behavior and Brock explained why he was tuning out.

“With a teenager it’s really important to give them the rationale and the justification of explaining what you’re doing and why you’re doing it. It’s not helpful for me to ruminate on this so I’m going to turn it off and I’m going to step away,” he said.

For children of all ages, reassuring them of their safety is also critical.

Brock said for middle and high school students, he likes to talk to them about odds. Schools are statistically very safe and students are far more likely to be killed or seriously injured in a car, he explains.

“You help them to frame the threat in a more objective way. That’s harder to do for little kids,” he said.

For younger students, Brock recommends telling them to “look for the helpers,” borrowing a phrase from the late TV host Fred Rogers. Rogers urged parents to point out police officers and other uniformed officials to remind children that there are adults they to turn to in a crisis situation.

Children should be able to exhaust all their questions, and parents should answer as honestly as possible, he advises. Don’t provide extra or scary details that children aren’t asking for, but don’t lie to them. It’s perfectly fine to tell a child you don’t know the answer, he said.

It’s also important to remember that everyone is still processing the tragedy, said Christy McGill, director of the Nevada Department of Education’s Office of Safe and Respectful Learning Environment.

The Clark County School District also deployed counselors and social workers districtwide, even while sending others to help those affected on the Las Vegas Strip.

“We just have to figure this stuff out together. I can’t emphasize that enough,” McGill said. “It’s not something we have to deal with on our own.”