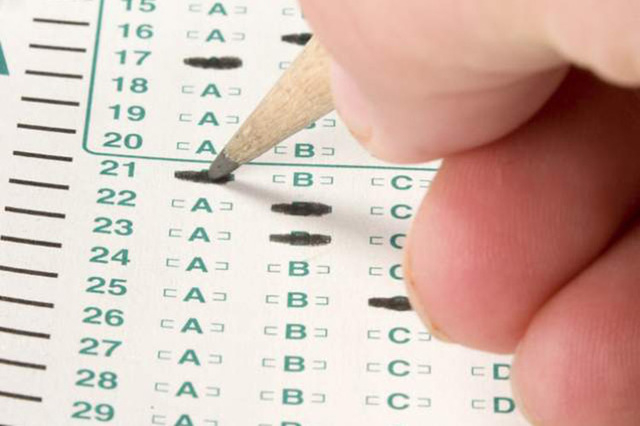 “I have no doubt that… student answer sheets were altered by one or more adults in the system,” said state Superintendent of Public Instruction Dale Erquiaga on Wednesday, ending a multi-agency investigation in which he personally interviewed staff at Kelly Elementary School, near Lake Mead and Martin Luther King boulevards.

However, the investigation has “not yielded the identity of the individual or group of individuals who changed the answers in 2012,” something that was complicated by a lack of security around the completed tests and other factors at the school.

Altered answers, however, are just the beginning of what the Nevada Department of Education and state attorney general’s office discovered in a two-year probe of the school. The state report criticizes the principal and assistant principal for lying, intimidating staff and breaking state laws regarding testing security.

The state also scolds the Clark County School District for “unsatisfactorily” investigating Kelly in 2012 and not following state laws for investigating such test score irregularities. The district reported “no concerns” of testing irregularities after an associate superintendent asked Kelly’s principal just two questions

Skorkowsky promoted Denson to the superintendent’s cabinet created in August 2013, making Denson chief educational opportunity officer. Skorkowsky demoted Denson two weeks ago for inappropriately influencing a hire, according to school sources, and Denson is now suspended in connection with the Kelly testing situation. Denson was the associate superintendent who cleared Kelly of cheating suspicions in 2012.

“It is important that our community have faith in the validity of our standardized testing,” Skorkowsky said in a statement on Wednesday. “Once I have had a chance to review the department’s full report and recommendations, I will take appropriate action so our students, parents and community can move forward.”

In 2010-11, not even a quarter of Kelly’s fifth-graders read at grade level. However, that number more than tripled to 77 percent the following year at the school, according to the questionable state test results. In third grade, Kelly went from having 44 percent of students proficient in both math and reading in 2011 to 69 percent and 88 percent proficient, respectively, in 2012.

The investigation began before receiving the questionable test results. An anonymous tip to the state accused Kelly’s principal of coaching students to change their answers. The state told the district to investigate. Denson interviewed Principal Harris, asking if she gave the test to any students and whether she told them to change their answers. She answered “No” to both questions, and Denson closed the case.

However, both the state and district require schools to create a list of the staff members who administer the annual tests. Denson never requested this list, which showed the principal gave the test, according to the state report.

The state performed fingerprint analyses, reviewed 2,000 pages of subpoenaed documents and had the testing company analyze the frequency of changed answers, an effort that found the rate was way above normal. Investigators interviewed 15 witnesses, including the school’s office manager, assistant principal, principal and teachers who gave the Criterion Referenced Tests in reading and writing.

But many questions remained unanswered, which state investigators partly blamed on the “climate of fear” created by Principal Harris at the school. The state has evidence that Harris talked with at least one witness, pressuring the employee about what to say when questioned. Harris testified that she didn’t talk with any witnesses.

Harris and the assistant principal were responsible for ensuring tests are securely stored, as laid out in the school’s test security plan. But that wasn’t done. The plan called for answer sheets to be stored in a locking file cabinet in the office of the assistant principal, who’d have a key. The only other key would be in the school safe. A sign-out sheet should have been kept for the key’s use.

No such cabinet existed until testing in 2013. The state found that answer sheets were kept in a storage closet with no sign-out sheet for the key. Assistant Principal Niemeier was the school test coordinator responsible for delivering tests to teachers and locking them in the storage closet. Investigators heard “conflicting stories” from Niemeier about how test materials were handled.

The state determined that it must update requirements for test security plans and methods for cheating detection. However, it also said the Clark County district must better investigate suspected cheating or be “subject to sanctions” for failure to meet state law. The Clark County School Board also may recommend to the state that Harris and Niemeier have their education licenses revoked.

The case also may be submitted to the U.S. Department of Education for further investigation.

“The (Nevada) Department (of Education) is left with evidence of the irregularity but no clear way to identify the perpetrators,” read the state’s report. “Either an individual or group of individuals has lied under oath” or the perpetrator wasn’t suspected and interviewed.

Kelly’s scores from the 2011-12 school year will be invalidated, and tests this year will be given by district staff.