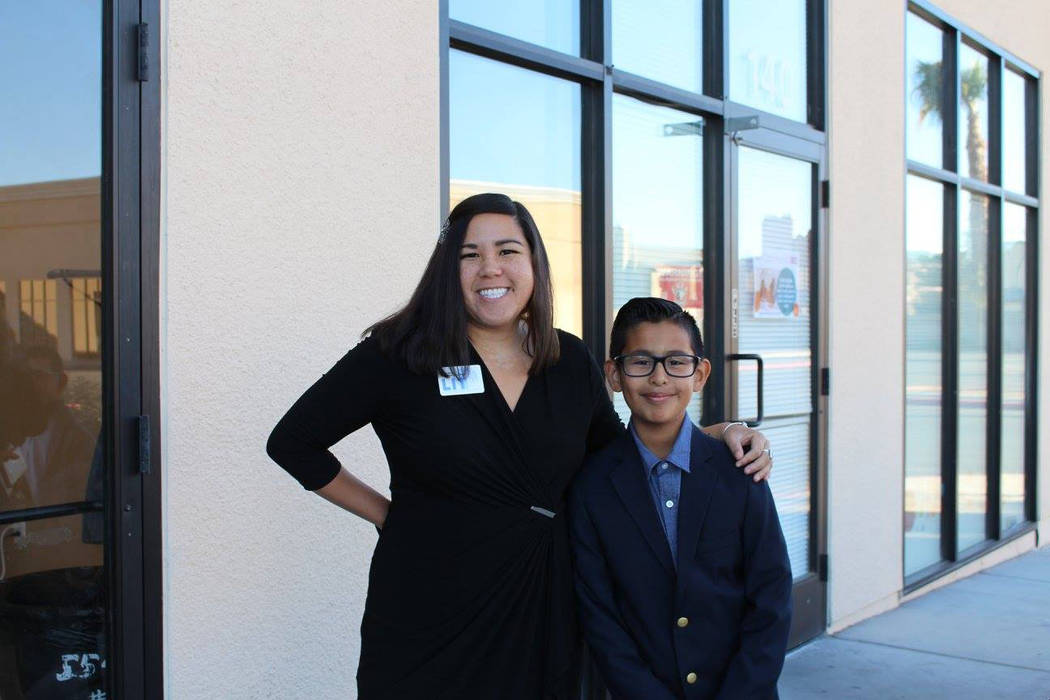 Erica Mosca, founder and executive director of Leaders in Training, poses with a student at an open house for the organization, which began in 2012 and aims to help students become empowered in their education. Facebook 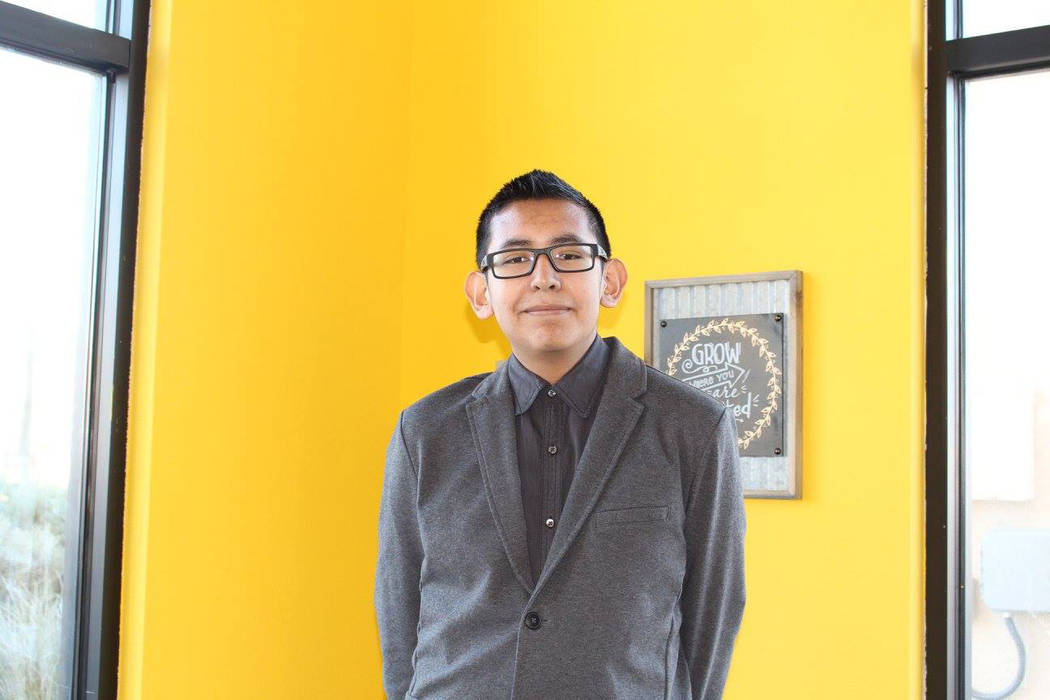 Jesse Cruz, a freshman at Canyon Springs High School, is hoping the experience through the local nonprofit Leaders in Training will help propel him to his goal of being Nevada's governor. Facebook

Erica Mosca first experienced education inequality as a teenager in California, although she didn’t know what to call it at the time. Her dad, chasing a better job, moved the family across the state to a solidly middle-class area from a poorer community. All of a sudden, school got hard for Mosca.

“I remember sitting in an Advanced Placement class and being told I was failing, even though I was ranked No. 7 in my old school,” she recently recalled. “I couldn’t understand. I hadn’t changed.”

Today, Mosca is leading an effort to combat the disparity she experienced through Leaders in Training, a program aimed at helping underprivileged students in Las Vegas navigate high school and college, all while training them to become community leaders.

The inspiration for the program springs from Mosca’s experience years ago, when she was accepted into a program affiliated with her new school that helped first-generation students apply to college. That helped her make the adjustments to get back on track.

After graduating, she attended Boston University and landed in Las Vegas in 2008 as part of Teach for America, a nonprofit that works to expand educational opportunities for children facing the challenges of poverty.

When she stepped inside her fifth-grade classroom at Goldfarb Elementary School in east Las Vegas, she says she saw that inequity again.

Mosca quickly became frustrated by the limited impact she was able to have in the classroom, which she blamed on a system where the quality of education students received largely depended on where they lived and whatever support system they had at home.

She had already set down roots in the area, buying a town house and moving her parents to town, but she left Las Vegas for a few years to earn a master’s degree in policy from Harvard University.

When she returned in 2010, she worked for the state, helping craft the first school ratings system. But again, she felt she was having little impact.

“I realized, you can work really hard in policy, but to me it’s not going to make a difference. I didn’t see it,” she said.

She changed course again. In 2012, when her first set of fifth-graders were freshman in high school, she struck out on her own and started Leaders in Training.

Though she was no longer part of the Clark County School District, Mosca relied on connections she had made as a teacher to find students, mentors and donations.

“That first year, it was nuts. We had no idea what we were doing. The board was my friends,” Mosca, 31, said recently. “That first class that joined in 2012, they are college sophomores. We have almost 120 kids now.”

The voluntary program — now working with its sixth set of students — accepts children of all backgrounds, though many would be the first children in their families to go to college. The students complete volunteer projects in the community but are also provided with support themselves. Mosca monitors their grades, helps them find internships and tries to instill a sense of social justice.

The program, which operates out of three locations and now has nearly 120 students from 19 local high schools, divides kids into “cohorts” based on their grade levels. The oldest kids, who are sophomores in college, are in cohort 1. The youngest kids, in cohort 6, are freshmen in high school.

“This is a great way of gaining a step in the college application process, too,” Cruz said.

Students take on new roles and responsibilities every year. One year that might be a required internship, the next a social justice project.

“It’s a way for little kids to get introduced into being a leader. You’re in charge of these kids and you’re making sure they’re doing they’re work. It’s a little bit difficult. Sometimes they get a little … interesting,” Cruz said.

They call the tutoring program Little Leaders. It started as a gift-in-kind. Mosca needed space, and Goldfarb provided her with portable classrooms in exchange for tutoring.

“We’ve got a lot of kids who don’t do well in school, but this is the only place they feel their affirmation,” Mosca said. “Even if you’re failing your math class, you can teach a kindergarten student or a first-grader.”

Cruz is still learning the ropes at Leaders in Training, but Nestor Sanchez is an old hand. Mosca was his fifth-grade teacher. Now, he’s at UNLV, studying journalism and media.

“A lot of us grew up together. Ms. Mosca was our teacher,” he said. “We were known as the guinea pigs of LIT.”

Sanchez’s parents are from Mexico, and he was the first member of the family born in the United States. He wanted to be a veterinarian, but he was learning English and school was a struggle, making it unlikely he would be able to attend college.

Then he enrolled in Mosca’s program.

“She just called us, she said let’s go to Circus Circus and then we can talk about college and the program there. That’s when she told us and that’s when we signed up,” he said.

The program has grown substantially since. The first cohort was 12 kids. Cohort 6 is double that.

Mosca’s students who continue on to college — and most of them do — have a 100 percent persistence rate. Nobody has dropped out so far. But her goal extends beyond a college degree.

Many of Nevada’s problems, Mosca says, can and will be solved by its next-generation leaders. Her goal is for these students to come back and stay here.

“How do you actually empower people from the community to make real change that’s lasting?” she said. “(With) a bench of diverse leaders who are from Nevada. … That’s the vision.”

That vision shows through students like Cruz, the second-oldest of four children. His parents are from Mexico and met in Las Vegas. His mother works from home, and his father is a bartender at TI. Neither finished the sixth grade, he said.

“They’ve pushed us. Our parents have made sure we connected with people,” Cruz said.

Connecting with people may prove handy one day. He’s decided he wants to run for governor — even if he’s not quite sure how to get there yet. He knows he’ll need a college degree, and he has set his sights on attending Harvard as an undergradatuate. Then he plans to earn a law degree, probably from Harvard, too.

Prior to his planned run for the Governor’s Mansion, he figures he’ll need some work experience. He’s not sure what he’ll do, but he knows what the outcome should be.

“I just want to give back to the community,” he said. “Growing up, my parents made sure we had friends who had a positive impact on us. I want to do that.”