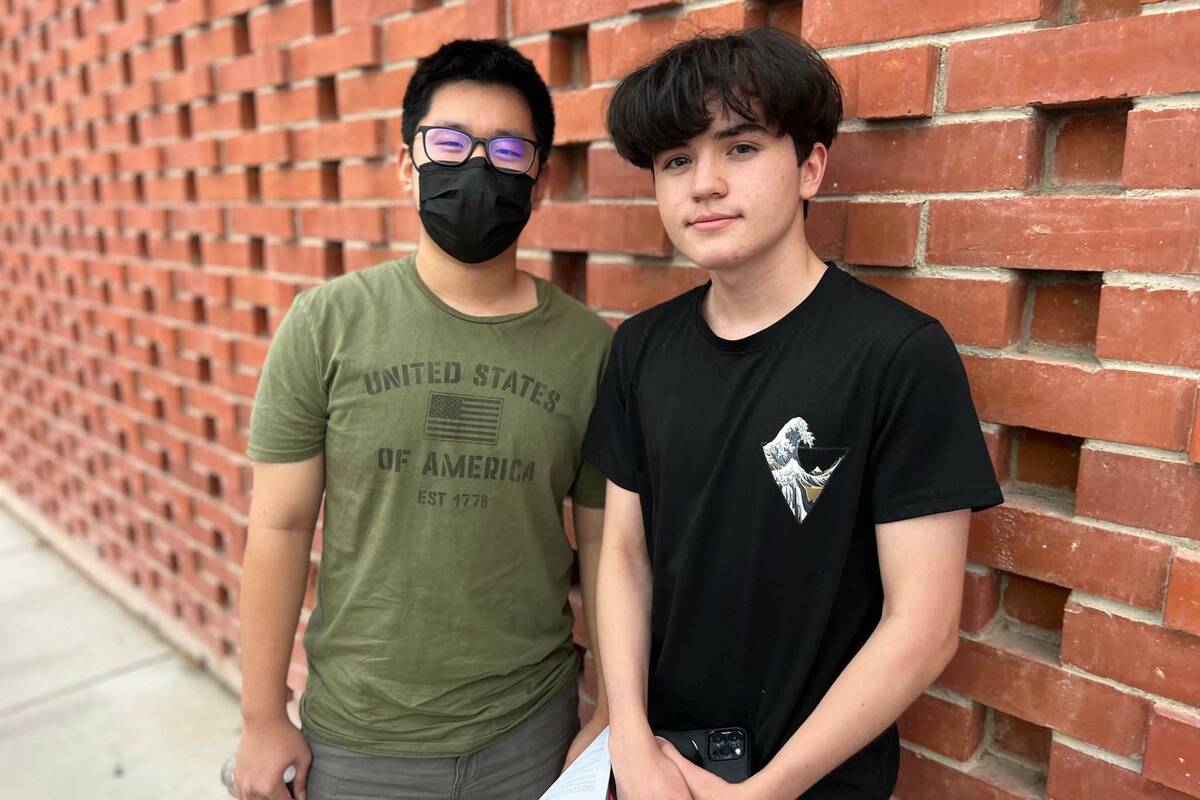 Edwin Ma, left, and Troy Harris stand outside the Clark County School District Edward A. Greer Education Center on Thursday, July 15. Ma and Harris, who are incoming seniors at Clark High School, persuaded the School Board to postpone the implementation of a policy that would cap the GPA that students are able to earn in the district. (Lorraine Longhi/Las Vegas Review-Journal)

Troy Harris and Edwin Ma were attending their first Clark County School Board meeting on Thursday, hoping to persuade board members to postpone the implementation of a policy that would cap the GPA that students are able to earn in the district.

The boys, both entering their senior year at Clark High School, assumed it would be difficult to change the trustees’ minds about the proposed policy.

But after hearing the students’ testimony, the trustees ultimately compromised with them, putting off the implementation of the GPA cap for one year.

“I feel good that they would actually listen,” Ma said. “It was actually really efficient how they listened to a few speeches and changed it.”

The district changed its policy in 2018 and lifted the GPA cap beginning with the class of 2021.

Under the policy adopted Thursday, the district will reinstitute the cap so that students can earn no more than a 4.95 weighted GPA. The change initially was proposed to be implemented for the class of 2023.

But on Thursday, the boys advocated against reinstituting the cap for this year’s incoming senior class, saying it was unfair to juniors and seniors across the district who already had spent hundreds of hours taking honors and Advanced Placement classes to raise their GPAs.

Harris and Ma currently have 6.1 GPAs at Clark High School. In a letter sent to district trustees, Ma, Harris and other district students said that a proposed 4.95 GPA cap would lead to dozens of qualified valedictorians at Clark, which has three magnet programs where students from all over the valley can apply to access specialized programs like math, science or performing arts.

“By reintroducing the GPA cap so suddenly in our final year of high school, all of this hard work is being essentially invalidated,” Harris said in a comment to the board.

But Ryan Fromoltz, a teacher at Las Vegas High School who has taught in the district for 10 years, said he was in favor of the change. Students throughout the district are still dealing with a pandemic, and their emotional and physical well-being should take precedence over their grades, he said.

Fromoltz told the Las Vegas Review-Journal that he’s seen students who want to get into good colleges overworking themselves, taking AP and honors classes on top of their extracurriculars and jobs outside of school.

“Students are not numbers. They are actually people,” Fromoltz said at Thursday’s meeting. “And I’m hoping … that we can actually help the students out and actually let them live their lives instead of forcing them to take extra classes.”

Samuel Hwang, another incoming senior at Clark, would have qualified as valedictorian under the proposed changes, but said he chose to support postponing those changes so that the policy could better serve the needs of all students.

Hwang said most of the students support changes to the current GPA policy and that they had met with Superintendent Jesus Jara at the end of January to discuss their concerns.

Those concerns include an environment of over-competitiveness among students in the upper class rankings and equity concerns about which students have the time, money and resources to take the number of AP courses it would take to have a competitive GPA at a school like Clark.

It costs $96 to take an AP test and earn college credits for the course, according to the organization’s website, but the College Board will provide discounts for eligible low-income students.

“If you have a bunch of students who have the ability to afford to take all these outside classes and others who can’t … that puts them at a distinct disadvantage,” Hwang told the Review-Journal.

Following Harris’ and Ma’s testimony Thursday, board Trustee Lola Brooks moved to approve the new requirements, but amended them to apply to the class of 2024 in an attempt to “meet them halfway.”

While Harris and Ma said they were saddened that incoming juniors who have already completed two years of schooling will have to deal with a GPA cap, they still counted the board’s decision Thursday as a win.

“We’re only two students,” Harris said Thursday. “I didn’t think they’d listen to two students, but they changed my mind.”