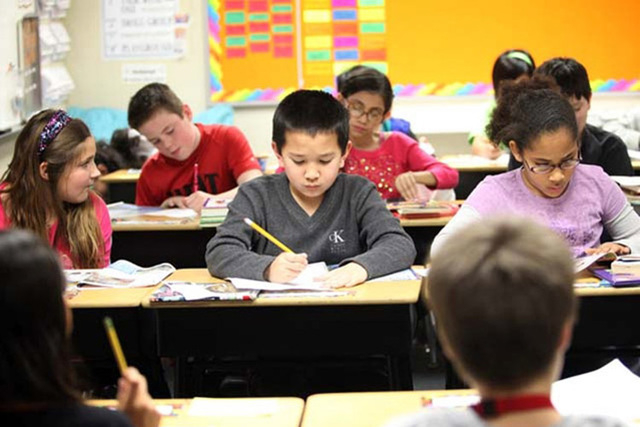 Nevada has been granted three additional years of flexibility from the accountability standards, and potential consequences, included in the No Child Left Behind Act. (Jessica Ebelhar/Las Vegas Review-Journal File)

CARSON CITY — A panel of lawmakers on Tuesday voted to draft legislation that would reduce the reliance on student test performance for a new teacher evaluation system from 50 percent to 40 percent.

State Sen. Joyce Woodhouse, D-Henderson, made the recommendation at a meeting of the Legislative Committee on Education, which she serves as chairwoman. The proposal will be drafted for consideration by the 2015 Legislature after the committee supported the draft with the provision that it would sunset to allow further review in 2017.

Woodhouse, who was a classroom teacher for 17 years before moving into administration, said other states have backed off from the 50 percent level as well, some to as low as 30 percent or 35 percent for student performance as part of an evaluation.

Woodhouse said the change would allow the school-based administrator who is performing the observations of teachers in the classroom as part of the evaluation to have more flexibility to work with a teacher on identified needs. The proposed change would give the administrator that additional 10 percent of the overall evaluation to focus on specific areas of improvement, she said.

Woodhouse said she was not comfortable moving to a level of 30 percent or 35 percent, and so suggested the 40 percent ranking.

“Emphasis has to be on student achievement, but the other part of that emphasis has to be on the classroom observation and administrative leadership doing the job they are supposed to do with any teachers who may be struggling a little bit or need a mentor or a coach,” she said.

The proposed bill draft comes on the heels of a vote by lawmakers in June to delay the implementation of the new performance system for one year, from the upcoming school year to the 2015-16 school year.

Support for the bill draft was qualified from some lawmakers.

Assemblyman Elliot Anderson, D-Las Vegas, said he was not endorsing the change by supporting the bill draft. But the Legislature next year needs to have a discussion about teacher evaluations and what has worked elsewhere around the country. Because Nevada’s evaluation process has been delayed for a year, the bill draft will give lawmakers the opportunity to have that discussion, he said.

Under Nevada’s now-delayed evaluation system, teachers and school-level administrators would earn one of four designations, from ineffective to highly effective, based on their score. The scoring system as now written would be split into the two equally weighted parts of test scores and observation.

Implementation of the new evaluation system was delayed by the Legislature’s Interim Finance Committee after lawmakers were told the system was not ready for the coming school year.