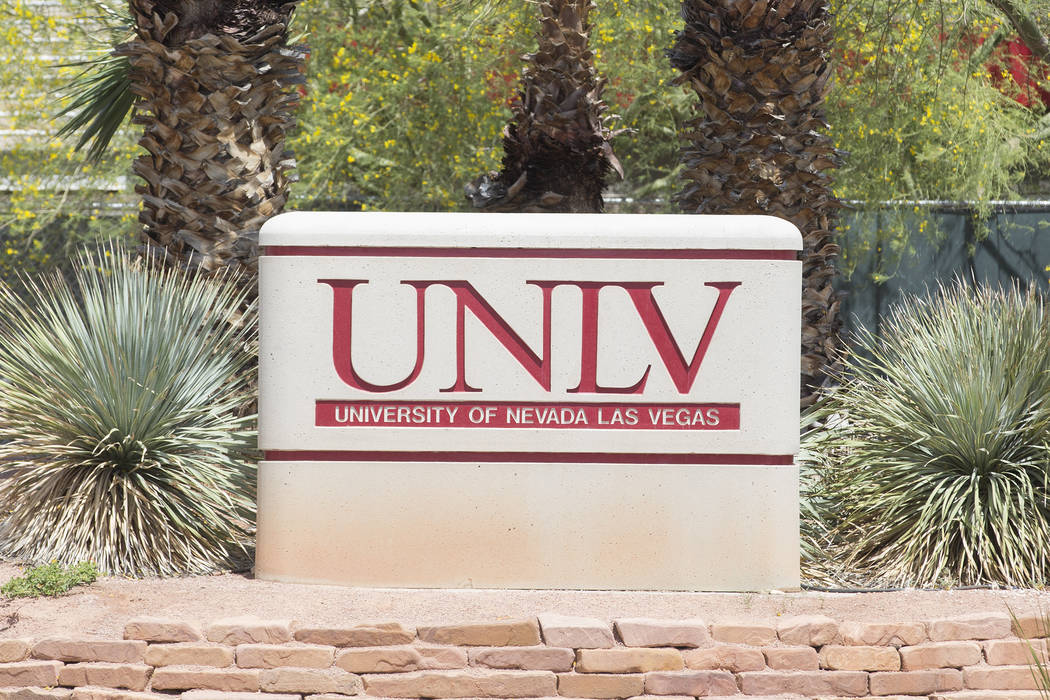 UNLV is notifying 184 patients that they may have had dental implant work done with an instrument that had been used on other patients. (Bridget Bennett/Las Vegas Review-Journal) @bridgetkbennett 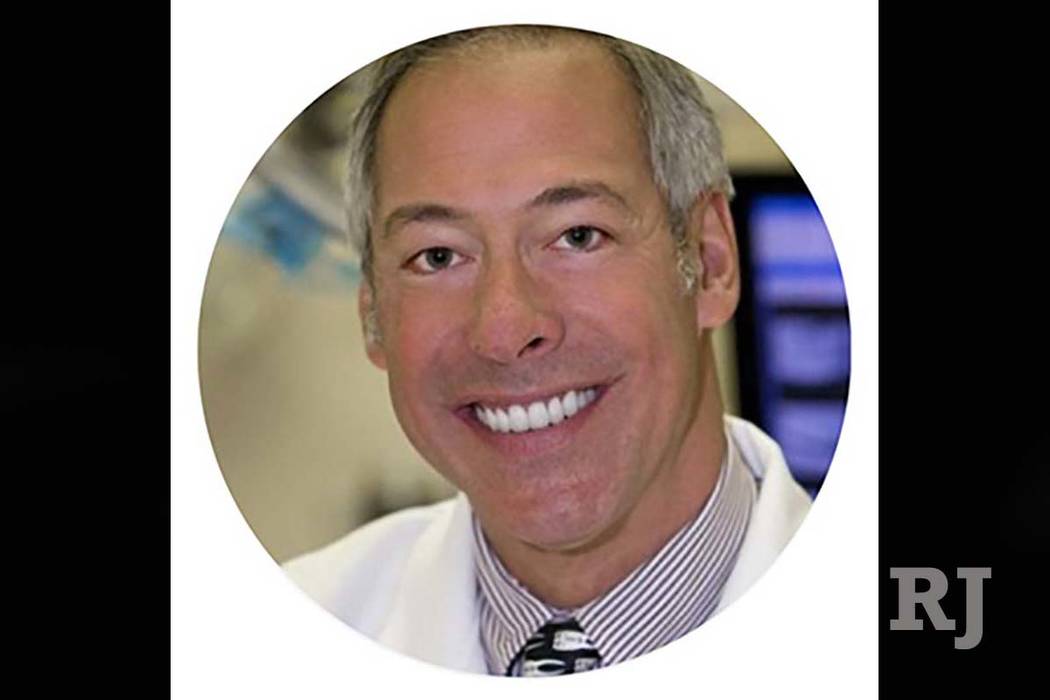 UNLV is notifying 184 patients that they may have had dental implant work done with an instrument that had been used on other patients.

“I am deeply disturbed by the allegations against the dentist in our dental school,” Regent Trevor Hayes said. “However, I am proud of the swift response of Chancellor (Thom) Reilly and the system (Nevada System of Higher Education) staff in addressing these allegations and getting to the bottom of it. I have many concerns and questions regarding UNLV’s timeliness of response and depth of response, and I want to know why the system had to take over this matter.”

Symptoms of dental implant failure include swelling, severe pain, discomfort, gum inflammation or loosening or movement of the implant.

The dentist who reused the abutments, Dr. Phillip Devore, resigned as UNLV’s director of the faculty group practice in December and now works in private practice at Image Dental. He said there was never a public health risk because he sterilized the abutments. He said he would sometimes use a healing abutment up to five times. 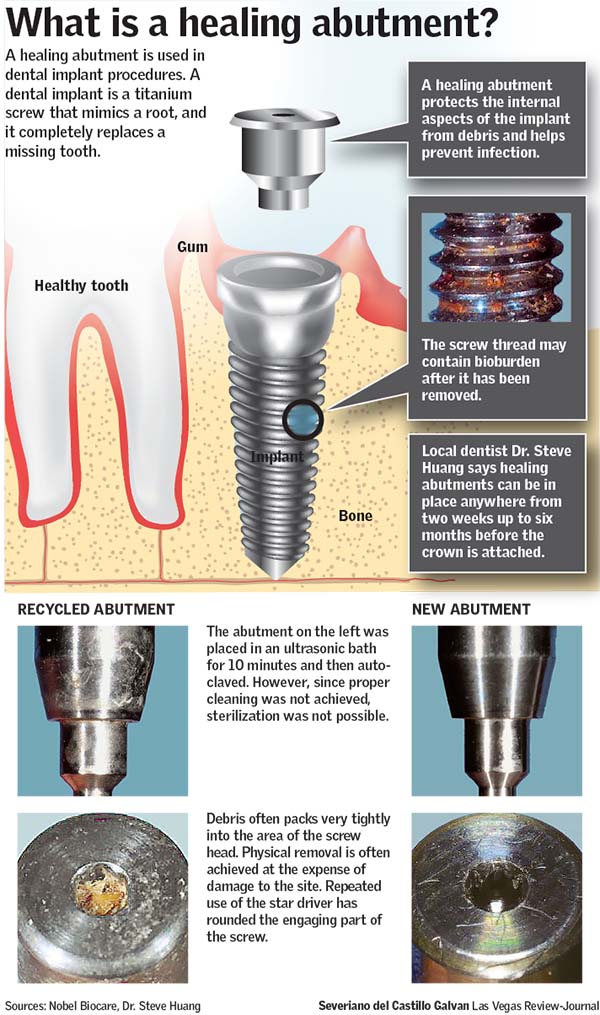 “It’s kind of gross I guess,” Devore said, adding that the silverware a person uses at a restaurant has been in hundreds of mouths. “To be realistic, dentists, physicians, and for anyone in health care, we reuse instruments all the time. The key is what do we do between uses.”

Devore said he didn’t reuse them for financial gain.

“It’s not cost prohibitive, but it adds to the cost,” Devore said. “Why buy something new if the thing you already have works just as well?”

According to Dr. Steve Huang, of the Henderson Oral Surgery and Dental Implant Center, a healing abutment costs $20 to $150.

“I could have bought them all day long. It didn’t matter to me from a financial perspective,” Devore said. “I’ve never seen any problems with the reuse of these healing abutments in over 40 years.”

In addition to phoning patients on Thursday, the university followed up with letters the same day.

Karen West, Dean of the School of Dental Medicine, said the school became aware of the reuse of the healing abutments in early September, and began reviewing the situation immediately.

West said the school follows best practices, and that includes not reusing a single-use item. She said it wasn’t written out in a policy, but that as soon as it was discovered, an email was sent to faculty, staff and students reiterating the policy.

The school hired the Dentons Group to conduct the investigation. West said the investigation finalized the number of patients potentially impacted by the reuse of the healing abutments last week.

“We are taking this very seriously,” she said.

Reilly, in early December, directed his legal staff to contact the state health officer to help guide the investigation.

“Dental schools embedded in academic institutions should adhere to the highest professional, ethical and best practices standard,” Reilly said. “I am extremely troubled with what has transpired at the UNLV Dental School. UNLV will be as transparent as possible. The Nevada System of Higher Education is committed to the well-being of the school’s patients and the community at large.”

Devore also taught students in the student clinic, West said, but that the students were not in the faculty dental practice when he was providing care to patients.

“It’s highly regulated in our student clinic because of the accreditation guidelines,” she said. “They’re separate buildings.”

Can be in place for months

Huang said the healing abutment molds the opening in the gums so an incision is not needed when the final abutment and crown are installed.

“A new healing abutment is more reliable,” he said. “The surface is pristine. There’s no microdamage.”

Sometimes a healing abutment is only in place for two weeks, but it can be in a patient’s mouth for up to six months before the dental crown is attached, Huang said.

“For what I charge for an implant, my patients would expect me to give them the best, and that’s what I try to do,” Huang said, adding that his manufacturer, Nobel Biocare, doesn’t allow for reuse.

Huang said a dentist might not see a lot of risk or harm to the patient, especially if the healing abutment is sterilized through a process called autoclaving.

“As long as it’s autoclaved, you’re not transferring biomaterials from one patient to another,” Huang said.

The school said it is not aware of any increased risk of the spread of infectious disease.