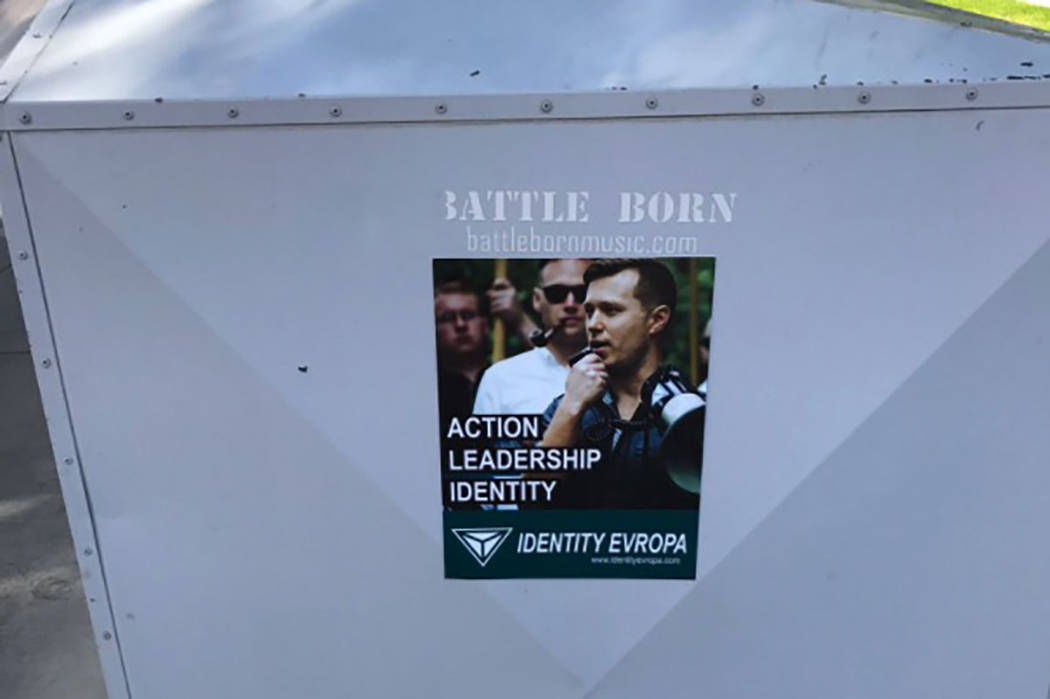 An advertisement for the white supremacist group Identity Evropa was found on UNLV’s campus Tuesday morning on a book drop near the Cottage Grove Avenue parking garage. (Twitter/Brett Le Blanc)

An advertisement for the white supremacist group Identity Evropa was found on UNLV’s campus Tuesday morning on a book drop near the Cottage Grove Avenue parking garage.

The group is focused on the preservation of “white American culture” and promoting the white European identity, according to the Anti-Defamation League. The ADL says college campuses are the group’s main target in distributing fliers, posters and stickers.

About three hours after the advertisement was first noticed by a UNLV student, facilities personnel took the sign down.

UNLV spokesman Francis McCabe said the sign was posted in violation of a university policy that sets rules for the posting of signs, fliers, placards or any similar printed material.

McCabe said he’s not aware of any other Identity Evropa advertisements on campus.

The advertisement appeared more than a month after a violent white nationalist rally in Charlottesville, Virginia.

Christopher Roys, student body president, said he was unaware of the advertisement but stood by a statement he made after the rally in Charlottesville.

“Our university should continue to reaffirm that students should not have to be afraid for their safety, and should not feel endangered on campus,” Roys said in an Aug. 14 statement. “White supremacy is a scourge on humanity, just as other hate groups, and we all should oppose them collectively.”