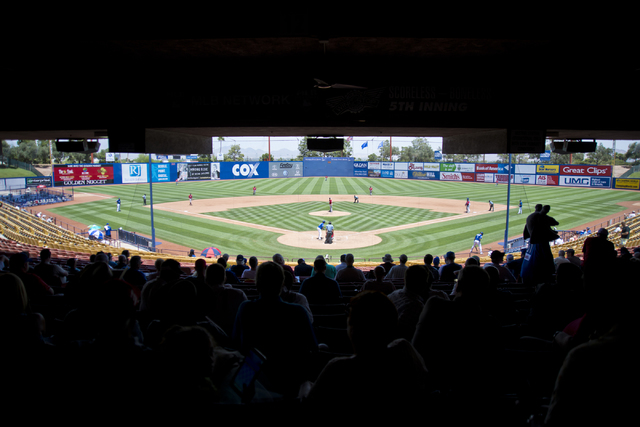 The Summerlin Sports Complex? Could there be such a thing? Oh, yeah.

Imagine this scenario: A state-of-the-art ice hockey practice facility for the Las Vegas NHL expansion franchise just off of Pavilion Center Drive, diagonally to the rear of Red Rock Resort and just opposite Downtown Summerlin. Then, heading farther in an easterly direction and ultimately next door to the 120,000-square-foot ice skating facility, a modernistic baseball stadium for the Las Vegas 51s.

Could you think of a better way to identify such a neighborhood than to call it the Summerlin Sports Complex? And all within an area that, until a few years ago, was viewed as little more than a bedroom community. Of course, Downtown Summerlin changed that kind of thinking two years ago.

So what are those other things that have to settle down a bit in order to make the sports complex happen? Well, for one, a lot may hang on a final decision by the NFL about whether the $1.9 billion football stadium will get built to accommodate the Oakland Raiders. But even more to the point is where the football stadium will be built.

Mayor Carolyn Goodman has long insisted that the best place for a domed football stadium is the site of the antiquated Cashman complex in downtown Las Vegas. In addition to forcing urban renewal onto a rundown section of the city, it would vastly rejuvenate the economic well-being of that part of town.

But Goodman, a member of the Southern Nevada Tourism Infrastructure Committee, has been in the minority in her choice for the site. Realistically, the odds for such an occurrence are in all likelihood off the board. In the alternative, she would settle for a major league soccer stadium or even an NFL practice facility at the Cashman site. Healthy revitalization of downtown Las Vegas relies on complete refurbishment of the Cashman area.

Irrespective of what will replace the Cashman complex, the city is outspoken in its desire to redevelop that area. So where would that leave the 51s, who still have six years on a lease with the Las Vegas Convention and Visitors Authority to play at Cashman Field?

That’s what brings us back to the concept of a Summerlin Sports Complex. It’s no secret that The Howard Hughes Corp., which owns the property and has leased the site of the hockey facility for 20 years to Black Knight Sports & Entertainment LLC — owner of the NHL franchise — would like to have the 51s playing in a baseball stadium next door.

There are many reasons for this, not the least of which is that Hughes Corp. is a one-half owner of the 51s baseball franchise. In fact, there’s a huge blueprint for development of the second phase of Downtown Summerlin hanging on one wall in the third-floor conference room of the Hughes Corp. headquarters at 10801 W. Charleston Blvd. On that layout is the area designated for a possible baseball stadium. And that area happens to be located just next door to the hockey practice facility.

So, Summerlin Sports Complex in the making?

Well, people in the know aren’t talking about a baseball stadium — at least not just yet. There are too many of those other things that still have to be settled, like who will pay for constructing it, and how much will it cost, despite the willingness of Hughes Corp. to donate the land, which it values at considerable millions of dollars.

There’s also the question of the 51s’ lease at Cashman Field. Everybody knows Cashman is outmoded, but a lease is still a lease, especially one that doesn’t expire until the end of 2022. And some of the thinking is that if the city wants to refurbish the area, maybe it’ll help pay for the new baseball stadium.

But not so fast. The site of the possible Summerlin baseball stadium is not in Las Vegas. It’s in unincorporated Clark County. Indeed, those other things can be troubling.

Still, the ring of a Summerlin Sports Complex sure sounds interesting.

Herb Jaffe was an op-ed columnist and investigative reporter for most of his 39 years at the Star-Ledger of Newark, N.J. His most recent novel, “Double Play,” is now available. Contact him at hjaffe@cox.net.