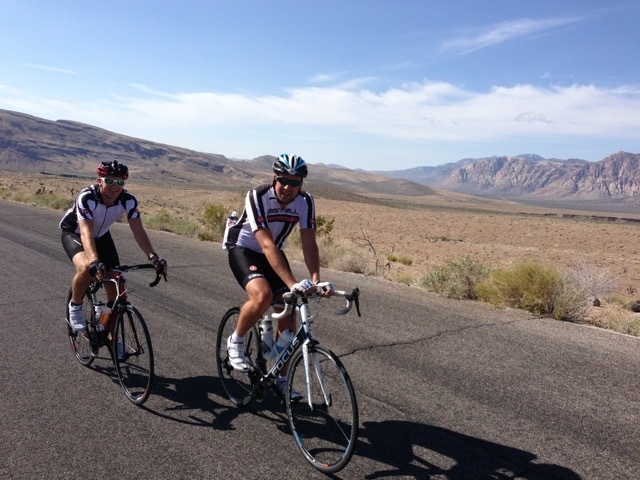 Members of the military unit are seen in this undated photograph, training for a bicycle event that will have them pedaling from San Francisco to Las Vegas. The effort will help raise money for Three Square food bank. (Special to View)

A local military unit, made up of Summerlin residents and one from Centennial Hills, is set to bring the fight against national hunger to the Las Vegas Valley.

The unit plans to pedal its way from San Francisco’s Golden Gate Bridge to Las Vegas, starting in late May, to raise money for Three Square food bank.

“Riding 100 miles (at pace) is like running a marathon,” Capt. Shane Rutherford said. “So, we’ll be doing that each day until we get back to Las Vegas.”

The first day’s ride is scheduled to take unit members to Monterey, Calif., a total of 112 miles. They are contacting hoteliers along the route, hoping one will provide free lodging for them and the four colleagues who will make up their two-vehicle support team.

They also hope local companies will assist them with the estimated $6,000 they’ll need for the drive to California, meals, hydration and incidentals.

The trail continues east into the mountains of the Sierra Nevada, passing through Yosemite National Park, then south to Palmdale and through one of the hottest regions in the world: Death Valley.

While they’re on the road, it’s possible other members of the unit will be mimicking their feat, but on stationary bikes in Las Vegas. Group members are trying to hook up with a local casino or major retailer to allow them to put a stationary bike in a public area. Unit comrades will pedal to highlight what their cohorts are doing with a display to prompt interest and donations.

One might think they’re all elite riders, and while one of them, Rutherford, finished first in the Tour de Summerlin’s 75-mile bike portion last year, others have some catching up to do.

“When this idea came up, I hadn’t been on a bike in 20 years,” said Maj. Stuart Cummins.

They began training in November with 15- to 20-mile rides, increasing the distance each time. Two months later, they’ve been on rides as long as seven hours, not an easy chunk of time to carve out, considering their military obligations.

The idea came about after the unit decided to have a food drive to benefit the homeless in spring 2014. When delivering the pantry items, they learned how great the need was.

“One of our (teams) spent time volunteering at a food kitchen,” Cummins said. “That’s when we realized the level of poverty that some people experience.”

They looked into where their effort could make the most impact and checked into various charities. With many in the unit being fathers, they decided to support Three Square, 4190 N. Pecos Road. The organization provides meals for children who are on free lunch programs at school and who face hunger at home.

At first, the cyclists donated their time with food drives, then added volunteering efforts that had them packing lunches. It wasn’t enough, so they thought up the fundraising effort that would include the entire community.

“Three Square really tugged at the heart strings, with nearly 350,000 children who don’t have access to three meals a day,” Rutherford said.

“When the officers first approached us, we were thrilled that they not only wanted to help Three Square, but they took the time and effort to come up with an inventive way to raise awareness, in addition to funds,” said Matt Muldoon, chief development officer of Three Square. “ … Each donation made to Three Square is invaluable as we work together toward our mission.”

The group is not the only one to go the extra mile, so to speak.

Jayson Black, an extreme marathon runner, ran 26 marathons in 26 days in 2013 to raise funds for Three Square, earning $5,441. Steven Jackson (an Atlanta Falcons running back who played at Eldorado High School) pledged $1,000 to the BackPack for Kids program for each touchdown he made during the 2009 season, giving a total of $8,000.

“I look really stupid in Lycra,” Cummins said. “I don’t want my stupidity to go to waste. I want people to help.”