The four boys were ready for the Martin Luther King Jr. Day parade. One tipped his blue plastic hat and grasped a banner bearing a picture of the civil rights leader and peace activist.

It was 10 a.m., and the downtown Las Vegas parade, themed “Living the Dream: Building a Bridge to Unity,” was underway. Thousands of people lined the streets and more than 73 groups composed of people of all ages marched during the four-hour parade to celebrate King’s birthday.

“We’re here to celebrate one of the most magnificent human beings ever,” Carolyn Goodman said. “What a great day in Las Vegas to celebrate all that he did in his memory.”

Many young people, who had the day off from school, joined in the festivities. Girls in sparkly pink and black hats marched ahead of people from the University of Nevada Las Vegas’ Upward Bound center wearing T-shirts reading, “We are united, living the dream.”

Eight-year-old Myasia Jones ran from her spot next to her parents on the side of Fourth Street, approached a woman in the parade and started dancing. The girl threw her arms up, her fists beating air, and finished with a split.

“We celebrate his birthday, so everyone has fun,” she said. “Everybody just dances their heart out.”

Myasia said she’s attended the Martin Luther King Jr. parade since she was a baby. She and her brother, Monroe, 6, grabbed yellow firefighter hats from the Clark County Fire Department and high-fived a North Las Vegas police officer who drove his cruiser down the street.

“The main thing is that today is about unity,” their mother, Robin Jones, said. “That (Martin Luther King) fought hard for us and everyone is created equal.”

The parade teemed with signs. Capital One’s float had pictures of King and announced, “Vegas Strong.” Marchers’ signs read “Because of him, we can,” “I sit with Rosa Parks,” and “I dream of unity.”

“Get it, child!” Brenda Davis, 65, shouted from her curbside lawn chair.

Davis said she was once a protester herself, during the Civil Rights Movement in Chicago, drilling and dancing from age 12. Davis said she usually marches with Victory Church in the parade, but opted to watch this year and bring her 6-year-old great-granddaughter, Laniah.

“I try to teach her the black culture,” Davis said, adding that it was Laniah’s first King Day parade. “We marched and fought for a long time, and black history is very important.”

The front of the line #MLKDay parade pic.twitter.com/ddl2CNlCCo

The #MLKDay Parade has begun in #DTLV with students from Wendell P Williams Elementary School pic.twitter.com/ojhCoH2aGI

Las Vegas Mayor @mayoroflasvegas “we’re here to celebrate one of the most magnificent human beings ever.” “What a great day in Las Vegas to celebrate all that he did in his memory.” #MLKDay pic.twitter.com/Q1eubIgnDs

Myasia Jones, 8, starts a dance party at #MLKJrDay Parade in #DTLV. She goes to the parade every year. “We celebrate his birthday so everybody has fun and dances their heart out,” she said. pic.twitter.com/dIBD2vCh0P 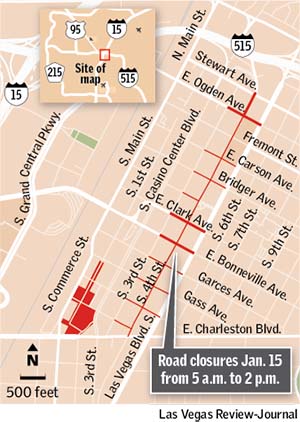