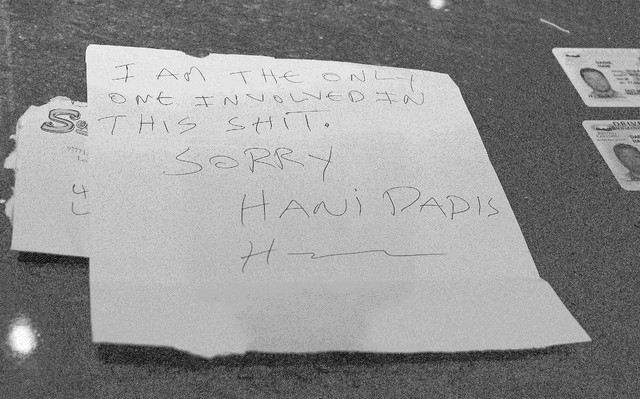 On Sept. 12, 2012, as pressure from FBI agents in the investigation mounted, Drug dealer Hani Dadis, 51, put a gun to his head and shot himself to death in a hotel room at the South Point resort on the far south end of the Strip. This is one of the two notes he left behind. It reads: “I am the only one involved in this shit. Sorry."

As the FBI’s racketeering case against the limousine industry moves closer to trial, one key target won’t have to worry about facing a jury of his peers.

Dadis, 51, of Las Vegas, was accused in FBI affidavits of being the main supplier of the club drug Ecstasy, or MDMA, to limousine drivers and their high-rolling clients. He had been operating untouched by law enforcement authorities for years.

His drug dealing was described in one affidavit as “substantial.” Dadis drove around town in a 2004 Jaguar and once lived in the exclusive Spanish Trail development in southwest Las Vegas.

On Sept. 12, 2012, as pressure from FBI agents in the investigation mounted, Dadis put a gun to his head and shot himself to death in a hotel room at the South Point resort on the far south end of the Strip, the court documents show.

His death, ruled a suicide by Clark County Coroner Mike Murphy, came a week after agents raided an apartment Dadis had rented to stash the Ecstasy he distributed.

Dadis, a Canadian citizen, was targeted in the wide-ranging FBI investigation into the activities of limousine company operator Charles Horky and his associates, who were charged in a series of indictments unsealed in December.

FBI agents uncovered the link between Dadis and the limousine industry during an earlier phase of the investigation that led to the drug trafficking convictions of two of Horky’s limousine drivers, an FBI affidavit alleges.

At the time of his suicide, agents had him under surveillance and were secretly conducting court-approved wiretaps on his cellphone.

Dadis left two notes in his hotel room absolving others, including family members, of any participation in his drug trafficking activities.

“I am the only one involved in this shit. Sorry,” one note read.

Chris Rasmussen, a defense lawyer for one of Dadis’ accomplices, Rebekah Fouquet, referred to the notes in court papers seeking a lighter sentence for his client, who pleaded guilty to a charge of conspiring to distribute Ecstasy.

Fouquet, who lived in the apartment where the Ecstasy was stored, is to be sentenced next month.

Two other members of the drug ring indicted last December have pleaded guilty and are awaiting sentencing. Gregory Ruiz admitted in his agreement with prosecutors that he worked with Dadis, and Allen Adams admitted he worked for Ruiz.

The two men would supply the club drug to limousine drivers who would then sell it to their clients, mostly tourists on the Strip, according to the court documents.

In a Sept. 14, 2012, progress report to U.S. District Judge Gloria Navarro, who authorized the wiretaps, prosecutors said agents did not intercept any “pertinent calls” in the immediate days before Dadis shot himself.

But in an earlier report, prosecutors detailed an intercepted call between Dadis and Fouquet on Sept. 5, 2012, the day FBI agents executed search warrants on Dadis’ apartment. Agents seized seven pounds of Ecstasy in the raid.

Prosecutors told Navarro that Dadis was suggesting Fouquet was “set up” and robbed and wasn’t the subject of a real federal raid.

“If you haven’t been ripped off, then I would be inside right now. Do you under­stand?” Dadis was overheard telling Fouquet.

By “inside,” prosecutors said, Dadis was indicating he would have been in jail.

The Ecstasy investigation was part of the larger Horky inquiry.

Horky, 52, is the CEO of CLS Nevada, a limousine service operating here since 1994. On its website, CLS called itself a 24-hour chauffeur-driven service that had contracts with a dozen Strip resorts.

Horky and two of his top aides, CLS manager Kimberly Flores and financial adviser Archie Granata, were among those charged in the federal indictment with conspiring to engage in a racketeering enterprise.

The indictment alleges Horky, regarded as a leading industry insider, and other defendants conspired to deal in prostitution and drugs and commit acts of financial fraud.

In all, nine CLS employees and associates, including several limousine drivers, were charged in the indictment, which outlined the four-year criminal conspiracy.

Another nine defendants tied to the scheme were charged in four separate indictments with distributing Ecstasy and cocaine on the streets of Las Vegas.

Horky and his co-defendants used the limousine service to conduct their broad range of criminal activities from September 2008 through November 2012, the indictment alleges.

Drivers sold drugs and promoted prostitution from their limousines, according to the indictment

Horky is alleged to have directed the criminal activities, requiring drivers to pay him a cut of the illicit money they were receiving.

The defendants in the racketeering case, all of whom have pleaded not guilty, are to stand trial in February.

The preliminary investigation found that a motorcyclist was driving at a high rate of speed and slammed into the back of a Nissan SUV.