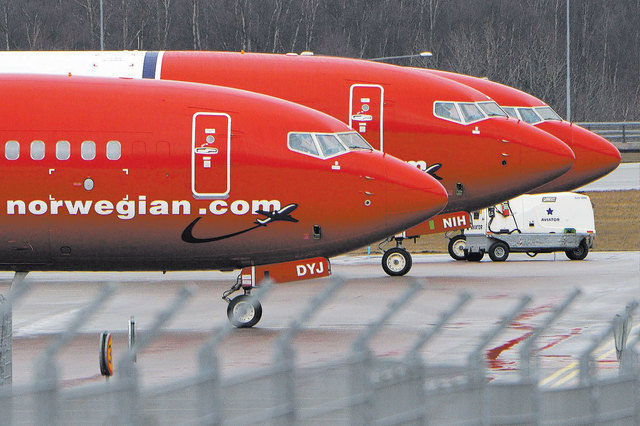 Norwegian Air Shuttle, a low-cost, long-haul air carrier at the center of a nationwide debate about fair wages and open-skies agreements, will expand its Las Vegas service later this year, venturing into the highly competitive London market.

The Oslo, Norway-based carrier, which operates more than 400 routes to 130 destinations in Europe, North Africa, the Middle East, Thailand, the Caribbean and the United States, announced Monday that it would begin flying twice weekly on Mondays and Thursdays between McCarran International Airport and London’s Gatwick International.

Flights begin Oct. 31, and the company plans to introduce the route with one-way fares of $199.

Norwegian will use twin-engine, 291-seat Boeing 787 Dreamliner jets on the route.

The airline already offers nonstop round trips between Las Vegas and Copenhagen, Denmark, and Stockholm, Sweden, and intends to begin new service to Oslo in November.

“Norwegian is very committed to growing the U.S. market and we are delighted to grow our presence at McCarran International Airport by adding service to London Gatwick,” Thomas Ramdahl, Norwegian’s chief commercial officer, said in a release announcing the new service.

“We’ve seen great performance on all of our transatlantic flights and now, we are able to make travel to London more affordable for Nevadans,” he said.

McCarran has been gearing up for additional international service, converting some D gates and enabling access through a new pedestrian tunnel to the U.S. Customs and Border Protection entry in Terminal 3.

“We’re in the process of doubling McCarran’s number of international-ready gates from seven to 14, and I personally cannot wait to see those new international gates occupied by more and more of Norwegian Air’s Boeing 787 Dreamliner aircraft,” said Rosemary Vassiliadis, director of the Clark County Department of Aviation.

“The additional accessibility marks the fourth nonstop route by Norwegian, the destination’s fastest growing international carrier, to Las Vegas in the past year and helps to achieve our goal of increasing international visitation over the next decade,” said Cathy Tull, senior vice president of marketing for the Las Vegas Convention and Visitors Authority.

Norwegian will be entering uncharted waters with the London route. While Norwegian’s Copenhagen, Stockholm and Oslo routes have no competition, London Gatwick already is served daily by Virgin Atlantic and Norwegian will go head to head with the British carrier. British Airways also offers nonstop round trips to London’s Heathrow International Airport.

Norwegian is in the center of a debate over its right to expand operations in the United States.

The U.S. Department of Transportation has tentatively approved Norwegian’s bid to expand, but Democratic presidential candidates Hillary Clinton and Bernie Sanders have called on President Obama to withhold final approval of the airline’s application.

The department says there is no legal basis for blocking the application based on current open-skies agreements between the United States and the European Union.

But representatives of the Air Line Pilots Association, the Association of Flight Attendants, the International Association of Machinists and Aerospace Workers and the Transport Workers Union say Norwegian uses foreign flight crews and pays substandard wages to keep its costs low, gaining an unfair advantage by undercutting U.S. and European pay scales.

Convention authority and McCarran officials have said if Norwegian’s application is not approved it wouldn’t put the airline’s Las Vegas routes in jeopardy because they already have been published.