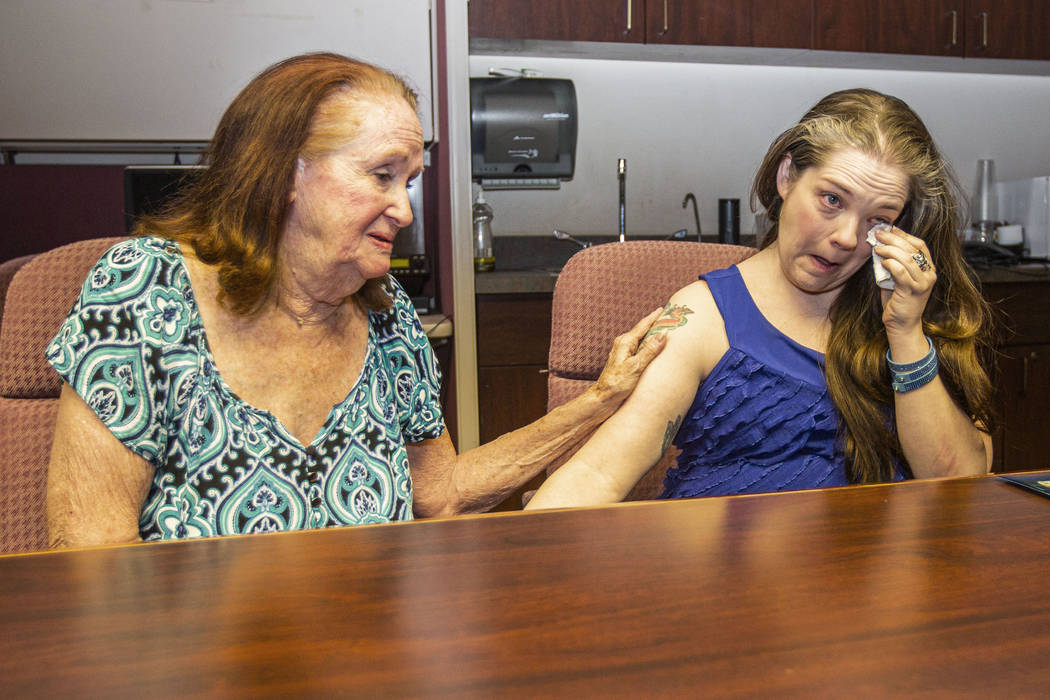 Joan Miller, left, the longest-tenured volunteer with the Trauma Intervention Program, consoles former TIP recipient Lori Ann Waddell at the Las Vegas Fire and Rescue headquarters on July 16, 2019, in Las Vegas. TIP, a volunteer organization dedicated too assisting families and loved ones at the scene of a tragedy, is celebrating its 25th year in the Las Vegas Valley. (Michael Blackshire/Las Vegas Review-Journal) 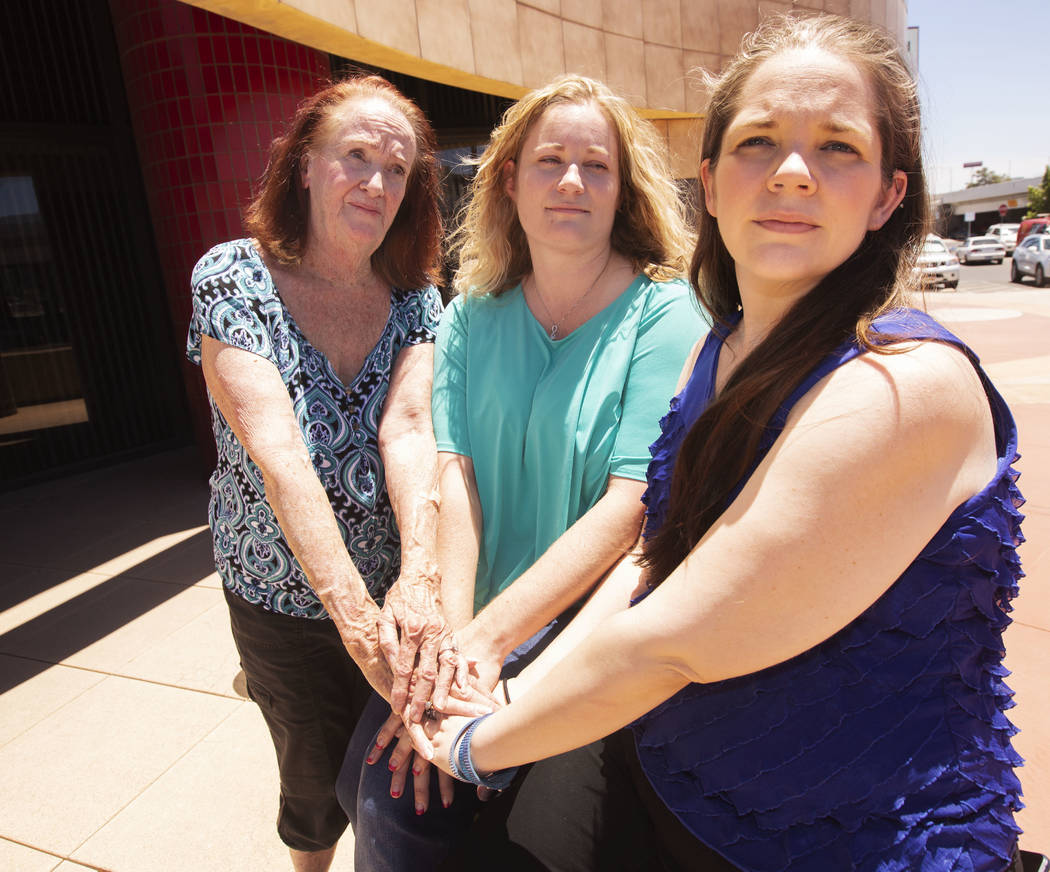 Joan Miller, 77, Jill Roberts, 43, and Lori Ann Waddell, 40, takes a portrait outside of the Las Vegas Fire Department HQ on July 16, 2019 in Las Vegas. TIP is a volunteer organization dedicated too assisting the families and loved ones at their most vulnerable moments at the scene of a tragedy, and is celebrating the organizations 25th year in the Las Vegas Valley. (Michael Blackshire/Las Vegas Review-Journal) 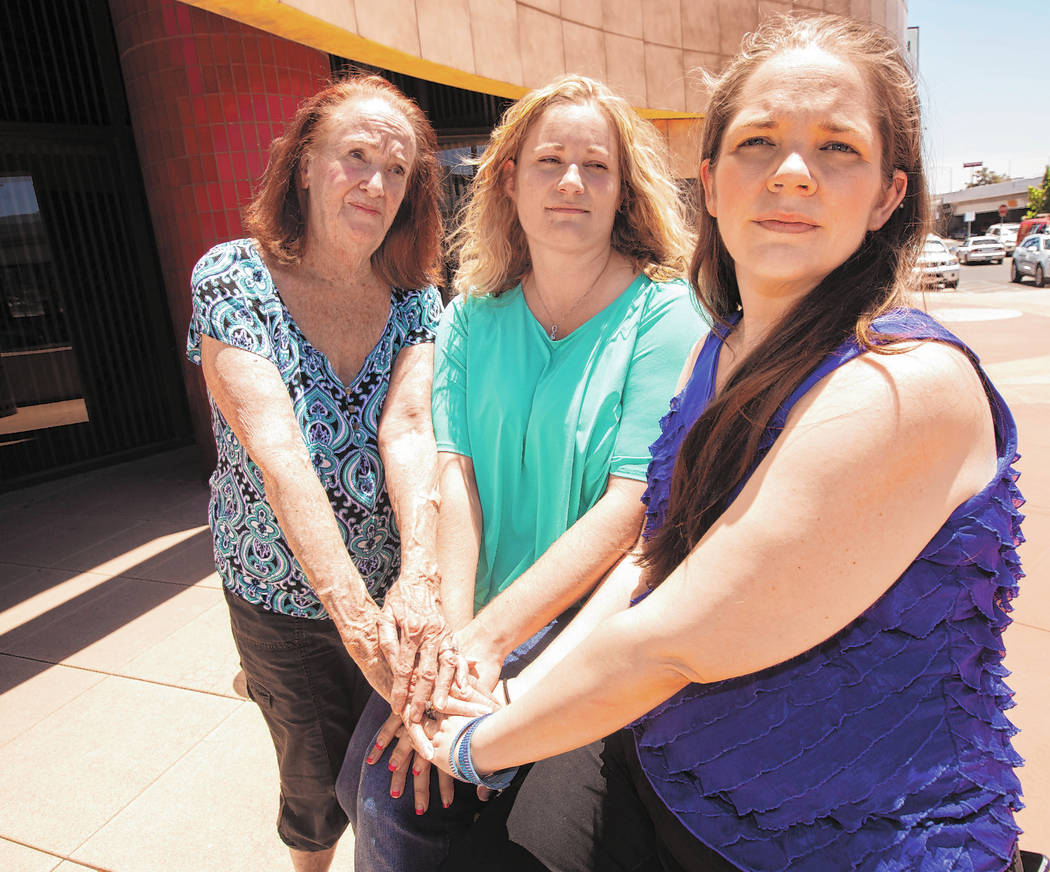 Joan Miller, 77, Jill Roberts, 43, and Lori Ann Waddell, 40, takes a portrait outside of the Las Vegas Fire Department HQ on July 16, 2019 in Las Vegas. TIP is a volunteer organization dedicated too assisting the families and loved ones at their most vulnerable moments at the scene of a tragedy, and is celebrating the organizations 25th year in the Las Vegas Valley. (Michael Blackshire/Las Vegas Review-Journal)

There she was, fire in her eyes, in a crowd of people about a quarter-century ago.

Arnie Adamsen’s memory is a bit fuzzy when trying to recall the specifics, but the former Las Vegas city councilman can still see the apparently nervous woman at the public event he attended.

“Why doesn’t Las Vegas have a Trauma Intervention Program?” she asked.

Adamsen smiled and laughed a bit.

“I don’t know,” he replied. “What is a Trauma Intervention Program?”

Pine was a volunteer from San Diego County’s then-fledgling nonprofit organization. She explained how the Trauma Intervention Program offered emotional and practical support for people at the scenes of tragedy, such as car crashes, unexpected deaths or killings.

“I said, ‘This is gonna be phenomenal,’” Adamsen recalled Wednesday. “And thankfully, I was right.”

This year marks 25 years in the Las Vegas Valley for the Trauma Intervention Program of Southern Nevada. It’s one of the oldest and largest of the 14 chapters across the country and one that exemplifies the program’s mission of providing resources, information and a shoulder to cry on for people at their most vulnerable moments, said the national program’s founder, Wayne Fortin.

“That community there in Las Vegas should feel really good,” Fortin said. “It’s really kind of a rare, special program that most cities and counties don’t have.”

Fortin, a San Diego-based mental health professional, started the program within San Diego County’s mental health system in 1985. He founded TIP as a nonprofit in 1989 and took it national in 1991. Southern Nevada’s chapter was founded in 1994.

Last year marked the busiest year for the valley’s chapter, with 8,320 people served and 1,568 scene responses, according to its annual report. And this June was its busiest on record, according to the program, with volunteers responding to 157 scenes while supporting 678 people in crisis.

Volunteers assist people grieving their loved ones with emotional support and the things they might forget or lack the capacity to navigate on their own while they grieve, such as funeral arrangements or travel plans for tourists.

Seeing the call volume increase is bittersweet, chapter CEO Jill Roberts said. The program would rather there be fewer requests for its 70 volunteers, as that would mean fewer tragedies. The number of violent or tragic events has increased as the valley’s population grows, she acknowledges. Yet, she thinks the higher call volume also demonstrates how emergency responders increasingly recognize the benefits of requesting TIP’s help at a person’s worst moments.

“It’s just second nature now for them to call and request us when a scene presents itself where there’s individuals who are in crisis,” Roberts said.

That wasn’t always the case.

Every city needs a “champion” to start a program, said Fortin, someone who takes up the cause and puts in the time and energy to convince a municipality of the benefits.

And Southern Nevada had a few of them.

Take Pine, who moved from San Diego to Las Vegas about 29 years ago with a goal of starting a program in town, Fortin said. As is often the case with new chapters, Fortin said, bureaucracy stood in the way.

Pine struggled to make inroads with the valley’s stakeholders. She bounced around agencies trying to gauge interest but failed to make much headway.

That is, until she decided to confront Adamsen.

He reached out to Fortin to discuss the fiscal effect on the city’s budget, which was minimal and was outweighed by the benefits. He pushed the program on the City Council and acquired the funding for a Southern Nevada chapter.

“I’m just proud of the fact I was a catalyst,” Adamsen said.

Yet, the program began only with the city’s Fire Department and would remain that way for a handful of years.

Ken Riddle, assistant fire chief at the time, was tasked with finding someone to coordinate the program. He brought on Carri Riddle, who was then Carri Escobedo, to recruit, train and organize the volunteers necessary to start a chapter. It took about six months to find enough volunteers to teach a class, Ken Riddle said.

Like many of his first responder colleagues at the time, Ken Riddle was skeptical at first.

Why would police or firefighters want civilians with none of their first responder training in their scenes? And would those volunteers really be able to successfully provide resources to those in need?

“It just didn’t seem like that would work,” Ken Riddle said.

But the skepticism proved short-lived.

Volunteers weren’t trying to take over a scene or interfere with investigations or medical care, Carri Riddle said. As it turned out, volunteers arriving at scenes and handling victims and their families freed up police, paramedics and others to do their jobs.

The program’s recognition grew via word-of-mouth, and slowly but surely, the buy-in followed.

The Riddles, who later married, then were tasked with pitching the program to other jurisdictions and agencies throughout the county. The roadblocks were familiar: funding and convincing the right people to implement the idea.

“It took a little while, but it certainly caught on,” Carri Riddle said.

Today, the Metropolitan, North Las Vegas and Henderson police departments all use TIP’s services, as do the coroner’s office, Boulder City and the valley’s other fire departments.

Pine, who approached the city councilman all of those years ago, didn’t live long enough to see the chapter truly take off, said Fortin, the program’s national founder. She died a few years after it began.

‘Worst day of your life’

It was a Las Vegas Review-Journal story about TIP that prompted Roberts to become a volunteer about 11 years ago. She remembers seeing a photo of a volunteer sitting on a curb with her arm around another person.

But the work is so much more than that, she said.

Volunteers receive 36 hours of classroom training, three months of field training and mandatory continued education. Most work three 12-hour shifts per month, when they are on-call and ready to respond to tragedies on a moment’s notice while balancing their own full-time jobs and families, Roberts said.

She’s forever grateful for the volunteer who assisted her when her best friend, James, died.

She showed up to his apartment, and a TIP volunteer arrived with sunscreen to guide and support her on an unseasonably hot day, Waddell recalled in a July interview. The volunteer explained the next few steps Waddell would have to take in a “very humane way,” she said. She insists she wouldn’t have known what she would’ve done without the volunteer’s help.

“An angel shows up on the worst day of your life and gives you hugs and tissues,” Waddell said.

The organization’s longest-tenured volunteer, Joan Miller, sitting to her right, touched her hand to Waddell’s phoenix tattoo on her right triceps. A tattoo of a winged taco — James made the best chicken tacos, Waddell said — covered the underside of her arm.

Miller doesn’t remember how many calls she’s had in her 17 years as a TIP volunteer — Roberts guesses north of 400 or 500. Nowadays, Miller said, she provides “debriefings” to businesses, hospitals or other organizations that seek TIP’s help after a death or speaking events at first responder open houses.

“You find people opening up to you,” Miller said. “They first don’t want to talk to you, and so, I’ve gotten to a point I’ll say, ‘OK, can you say one word that would describe (the deceased), and we end up having people start talking. They open up about their own circumstances that they’ve never shared with people.”

“It’s empowering to help them work through it,” she said.

Fortin, the national founder, said Southern Nevada’s chapter has caught the eye of other chapters for its innovation, leadership and handling of the immediate aftermath of the Oct. 1, 2017, mass shooting.

The group began offering training geared toward first responders — called E-TIP — within the past five years or so, Roberts said. Developed with local fire officials, TIP has put more than 600 emergency personnel through the training since its inception, she said.

The program condenses about 40 hours of training into an eight-hour curriculum that meets the specific needs of the hospital nurses, paramedics, police, family services employees and others who might respond to a critical call.

County firefighters must undergo the training if they want to be promoted, she said.

Clark County Deputy Fire Chief Jeff Buchanan, one of the class instructors, said E-TIP provides emergency personnel the chance to provide their own emotional and psychological support to loved ones at a deadly scene or even one another.

Something like E-TIP might not have caught on among first responders in previous decades, Buchanan said. Yet shifting attitudes about mental health in recent years have made them more cognizant of the effects of their often -traumatic jobs.

“You’re supposed to just compartmentalize or pretend like you don’t see it, and that’s just not reality,” Buchanan said.

Both he and Fortin sang high praise for Roberts, her staff and the many volunteers who pour their time and energy into ensuring everyone gets the support they need.

“The volunteers that TIP puts out in the community,” Buchanan said, “are some of the most dedicated people you’ll ever meet.”