BELMONT – Each time Donna Motis gazed out her kitchen window, through the leafless branches of her backyard cottonwood trees, she spied a rare slice of Nevada history: a three-story timepiece whose fabled architectural elegance was now tarnished by a sense of wretchedness and despair.

In its heyday, Belmont’s old brick courthouse, with its square wooden cupola, was the moral compass of this once-thriving mining town, where for decades a no-nonsense brand of Old West justice was dispensed and lawbreakers met their fates with both bravery and tears.

The imposing edifice was completed on July 4, 1876, when this silver boomtown was the Nye County seat. It saw its last case in 1905, long after the sliver was gone and the town had begun its cultural decline.

Like a crusty old lawyer whose career had fallen on hard times, the once-proud courthouse tumbled into a state of near-ruin. When it rained or snowed, Motis could see water pouring through the roof, staining the walls of a once-cherished building added to the National Register of Historic Places in 1972.

Weekend hikers on self-guided tours covered the walls with graffiti. Vandals carted off the building’s priceless period furnishings. In the 1960s, the infamous Manson Family even tried to make camp in the courthouse. Legend has it that feisty Belmont resident Rose Walters, rifle in hand, told the group to scram.

Then a few years back, this isolated high-desert burg with less than a dozen year-round residents decided to save its treasure. When the subject of the old courthouse came up at Dirty Dick’s Belmont Saloon, locals cupped their beers and shot each other knowing looks.

“We got to the point where we knew we either had to let it go to hell or put together a group of people to fix it,” said Rick Motis, a sturdy 63-year-old former truck driver with sledgehammer hands:

Well, this old courthouse was not going to hell; not by a long shot.

In 2011, residents formed Friends of the Belmont Courthouse, a nonprofit group whose mission was to rally the money, energy and expertise to stem the building’s decline. They wanted to install a new roof and windows and, just maybe, bring the old courtroom back to life as a living snapshot of the past.

The group includes Belmont residents Rick and Donna Motis as well as lawyers and judges from across the state who want to preserve an important piece of Nevada history.

“There was a time when the courthouse was the pulse of that town,” said Nevada Supreme Court Justice Kristina Pickering, who sits on the group’s board of directors. “It has endured so much neglect. For me, it symbolizes the pioneer spirit of the people who first settled here.”

But there was a catch to this renovation job: The courthouse never had electricity or running water, and not much has changed. Belmont is off the grid; a collection of scattered buildings without electricity, running water or phone service. Generators and solar cells help heat and cool homes. Flashlights are kept on hand.

“There’s nothing out here,” Donna Motis said. “When it gets dark, it gets dark. If you stand on a hill in the right spot, you might get a cell signal, but even that’s iffy.”

Rebuilding the courthouse without modern technology required contractors who ran their tools with generators and batteries; workers who didn’t mind taking a few extra steps to get a job done.

Rick Motis told of the day five men installed a 1,200-pound safe without a crane or winches. How did they do it?

“Brute force and ignorance,” Motis said with a laugh.

BORN IN A BOOM

The Belmont courthouse came to be for a couple of reasons: One was that the community was booming in the frenzied search for the second Comstock mother lode.

The other was less savory: In the early 1870s, suspected horse thieves Jack Walker and Charles McIntyre were lynched at the jail and buried in unmarked graves beneath a pinion pine on the lower edge of town. The episode convinced officials that more formal justice was needed on the Nevada frontier.

In the treeless high-desert, the $20,000 courthouse immediately became a modern wonder of its day – testimony to the true grit of the settlers.

Rock for the foundation was quarried locally. Each brick was fired in the nearby Belmont kilns. Wood for the doors, joists and roof timbers came from trees felled in the Sierra and brought in by train and horse-pulled wagons.

With a population that ranged as high as 2,000, Belmont had been the Nye County seat since 1867. It once featured an oyster house, bakery, two physicians, a drugstore, fruit store and watch repair shop. A newspaper wrote feisty editorials, including one in 1867 that read, “Here’s to our governor. He came in with very little opposition; he goes out with none at all.”

The Cosmopolitan Music Hall would host traveling vaudeville acts. There was a Chinatown and a mercantile store that stocked everything from Paris perfume to hob-nailed boots.

From the beginning, the thriving community’s new courthouse was more than a place for the sitting judge. It also housed the sheriff, district attorney and town treasurer, some of whom both worked and slept there. And even from those early days, the place was not without scandal.

Once, locals say, a district attorney lost his re-election race but refused to leave. And in in 1894, County Treasurer Adam McLean was found dead in his bed on the first floor of the courthouse. He chose poison over being charged with embezzling more than $15,000.

The courthouse also saw its share of notable cases. One involved a Nye County sheep rancher named George Ernst, who was tried for tax evasion after trying to pay his grazing fees in nearby Elko County, were they were considerably cheaper.

In a summation that went down in courthouse annals for its brevity, prosecutor Peter Breen stood before the jury and simply stated: “George Ernst has a flock of sheep/their fleece as white as snow./He feeds them in Nye County/and taxes them in Elko.”

He won the case.

Then the roof fell in on the mining economy. In the election of 1900, fewer than 100 votes were cast in Belmont. After the county seat was moved 46 miles south to Tonopah in 1905, the courthouse was closed and the building fell on hard times. Over the years it was used to store hay and surveyor’s equipment, and even accoutrements for a field hospital.

Tourists often left behind their signatures, which remain even today. “Barbara Swanson, June 9, 1940” decorates one wall.

In another place, a soldier bound for France during World War II left a poem to his girl:.

“When you and I our love must part/may it cause pain in both our hearts/I to some foreign land will go/sleep cold in death as others do/All this and more I have to say but/night calls and I mush away/With these lines/you will a hidden question find.”

Resident Terry Terras pondered over the lines before finally solving the riddle. Put together as a sentence, the first word of each sentence reads: “When may I sleep all night with you?”

In 1953, author Nell Murbarger wrote of the old mining town’s decline for Desert magazine, observing that the courthouse still stood “as square and unadorned as a three-story bank vault, still as indomitable as the Bank of England.”

Fifteen years later, the Manson family tried to take up residence there. The group left behind a piece of graffiti, written on the frame of a downstairs door that reads: “Charlie Manson + family 1969” with a peace symbol forming the O in Manson.

Ghost hunters try to contact spirits that supposedly remain here. But most people, Terras said, come in search of the Manson Family.

“Every time Manson comes up for parole, people flock to the courthouse to take pictures of that graffiti,” he said. “That’s got to be the most photographed door jamb in the entire country.”

The Friends of the Belmont Courthouse initially decided to do things the grass-roots way: They wanted all the money for the refurbishment to come from donations.

They’ve had to get creative: Each of the 30 new windows was financed by different donors. Nye County paid for a new roof. The cupola was also fixed and painted. So far, the group has raised about $130,000 and has spent $100,000, mostly on the windows.

The group’s board holds regular meetings to plan strategy, and members take them seriously: Kim Wanker, the 5th District judge in Pahrump, will drive 650 miles roundtrip to attend a planning session without staying the night.

When the work will be done —and even how much more they can do — remains up in the air.

“That building is weather-tight,” said Donna Motis. “Even if we didn’t do another thing, it would stand for another 200 years. There’s no way the elements are going to break down that building.”

But many in the group want to do more, including renovating the courtroom. There’s talk of asking the state Supreme Court to hold a hearing there once the work is done.

“We’ve never held a session in a ghost town or in a building without electricity or fire protection, but I’m open to anything,” Justice Pickering said. “Personally, I think it would be cool.”

But there is a stumbling block: Most of the historical photos were exterior shots, so workers have no idea what the old courtroom looked like when in use. Faint lines on the floor suggest where the judge and jury sat, but what they really need – from some museum or home attic – is a historic photo of the old courthouse in action.

Until then, they are collecting period furniture for the project.

Both Terras and Rick Motis offer tours of the courthouse, gladly accepting donations.

“Any building that can stand that long deserves some loving care,” Terras said.

Now, when Donna Motis looks out her kitchen window, she doesn’t see a neglected relic of the past, but a symbol of Belmont’s stubborn endurance. 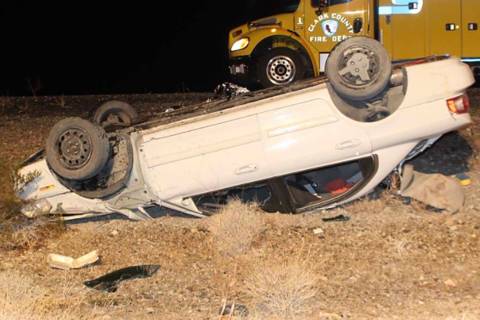 A 65-year-old man from Indian Springs died in a rollover crash early Saturday on U.S. Highway 95 near the Clark County town, the Nevada Highway Patrol said.