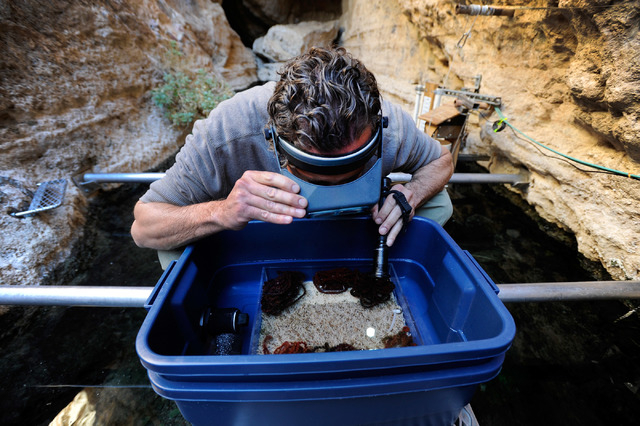 Aquaculturist Olin Feuerbacher examines a spawning mat collected from the water at Devil's Hole on Nov. 25, 2013. A count over the weekend suggests a rebound in the population of critically endangered Devil's Hole pupfish. (David Becker/Las Vegas Review-Journal) 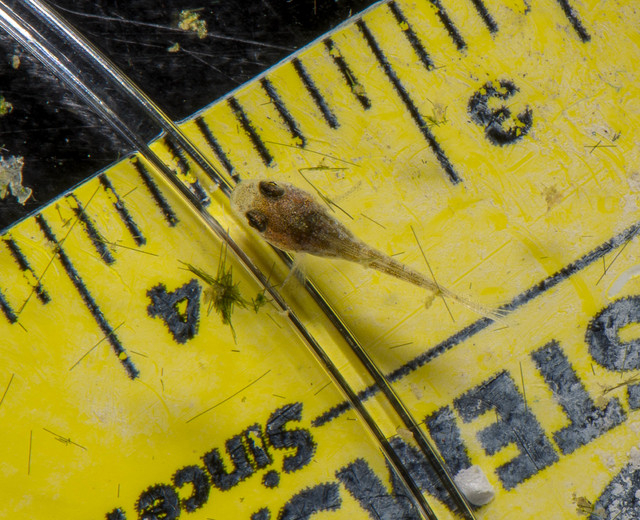 A pupfish hatchling swims above a rule in this undated photo taken in a lab near Devil's Hole, 90 miles west of Las Vegas. (Olin Feuerbacher/Ash Meadows Fish Conservation Facility) 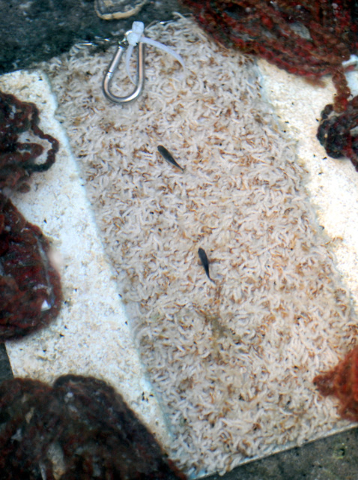 Two Devil's Hole pupfish swim over a spawning mat at their Devil's Hole habitat on Nov. 25, 2013. A recent count recorded 115 of the critically endangered fish, an increase over last spring's total of 80. (David Becker/Las Vegas Review-Journal) 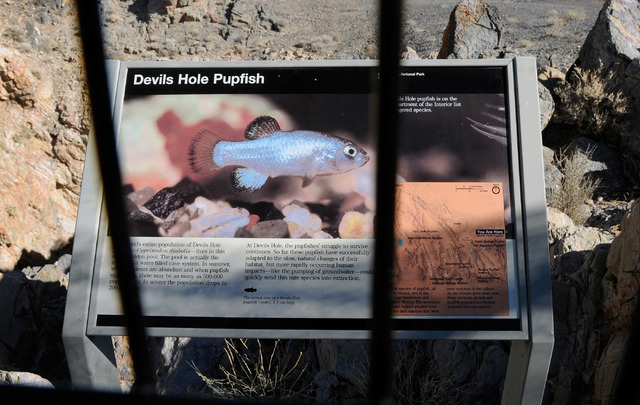 An information sign for the Devil's Hole pupfish is posted near the overlook to the fishes's habitat located about 90 miles west of Las Vegas on Nov. 25, 2013. (David Becker/Las Vegas Review-Journal) 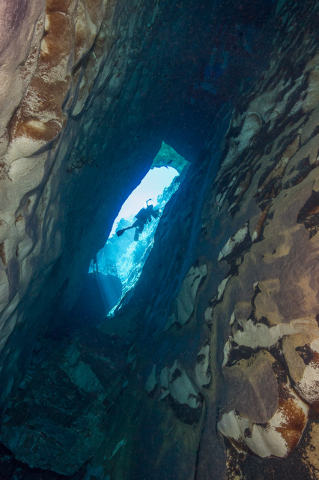 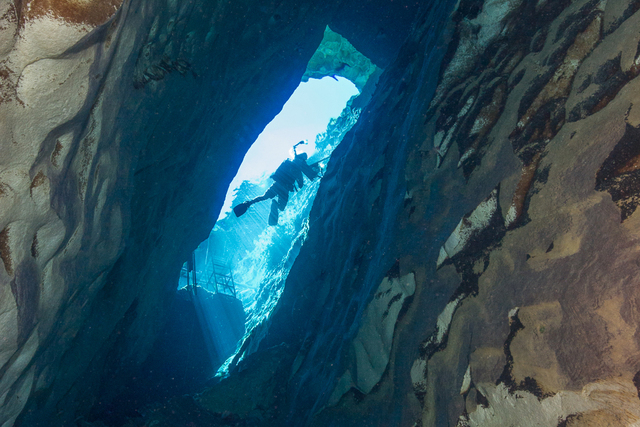 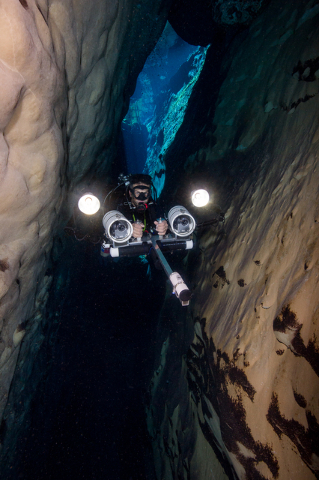 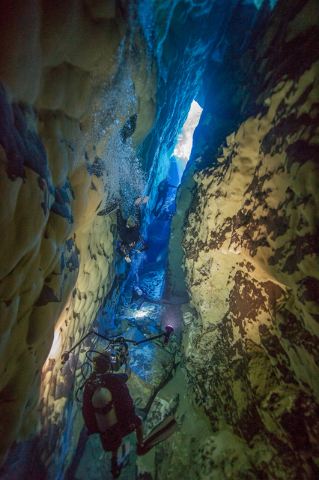 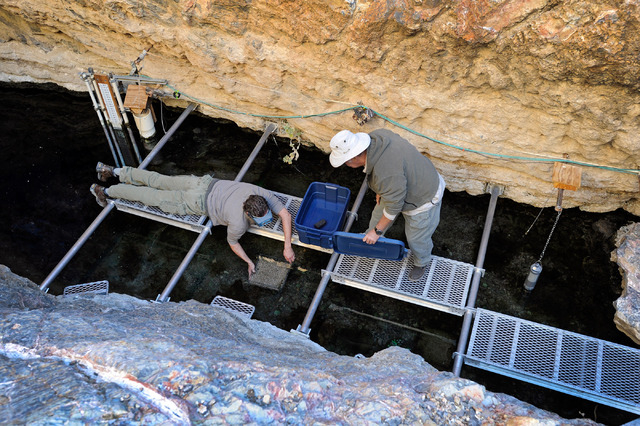 For one of the world’s most endangered species, the Devil’s Hole pupfish is having a pretty good year.

The population of 1-inch fish appears to be rebounding, according to a count conducted earlier this month in the water-filled cavern the species calls home 90 miles west of Las Vegas.

The annual spring count showed 115 pupfish, up from 80 last April.

Meanwhile, researchers at a multimillion-dollar lab less than a mile from Devil’s Hole continue to make strides toward establishing a captive pupfish population for future breeding and research.

That may not sound like a lot, but it’s not bad considering how little material there is to work with. The females lay only one egg at a time, and researchers are limited to collecting no more than about 10 eggs each month to minimize the impact on the wild population.

The team has yet to successfully breed pupfish in the lab. Some of the lab-raised females have produced eggs, but none of those eggs developed.

Before 2013, pupfish had never been successfully hatched and raised in captivity using eggs collected from Devil’s Hole.

In early 2014, the lab team released its first batch of 29 captive-raised pupfish into a state-of-the-art refuge tank at the facility. The 100,0000-gallon tank is designed to replicate the fish habitat in Devil’s Hole, right down to its shape and temperature. The 90-plus-degree water in the tank comes from the same thermally heated source that fills Devil’s Hole.

In February, Lee and company moved a second, smaller batch of fish into the refuge tank.

“Pretty much the moment we moved them out there we started seeing tons of spawning activity,” he said.

The Devil’s Hole pupfish has been under federal protection since 1967, but extinction remains a very real possibility.

The population peaked at 544 in 1990 but began to decline in 1996 for reasons experts still can’t explain.

The spring survey in 2013 turned up just 35 pupfish, the lowest total since regular counting began more than 40 years ago.

Now the numbers seem to be trending up again, as does the relative health of the population.

Wilson was one of seven people who donned scuba gear to count pupfish during a series of dives on April 9 and 10.

At the surface, the pool is about 8 feet wide and 60 feet long, with a shallow shelf where the pupfish spend most of their time. But the cavern angles down into the groundwater table to an undetermined depth well over 435 feet. Some have called it “the deepest cave in North America,” Wilson said.

The pupfish rarely go down more than about 100 feet, so that’s where the population counts start.

Divers work in teams, logging fish at varying depths while researchers at the surface count the ones in the shallows, Wilson said. The entire process takes 45 minutes to an hour and is repeated several times to account for the vagaries involved in tracking tiny, moving fish.

“There is the possibility of counting the same fish more than once or missing a fish altogether,” Wilson said.

“We do that because we can’t handle the pupfish,” Wilson said.

Work in the lab can be even more time-consuming and tedious. Over the last six months of 2014, for example, researchers collected only a handful of viable eggs from Devil’s Hole and produced just six fish.

“They were very well cared for,” Lee said with a laugh.

The aquariums at the lab currently hold 17 pupfish, all hatched within the last two months.

Ultimately, they will need a couple hundred fish to establish a “self-sustaining population” in the refuge tank, Lee said.

The research team plans to head back to Devil’s Hole on April 25 to gather more eggs.