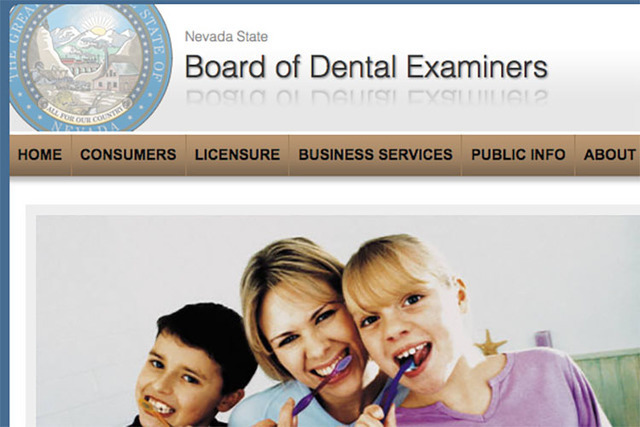 A legislative audit of the state dental board revealed systemic issues with the board’s operations, including poor record keeping and questions about how the public’s complaints are investigated.

The report, presented at the June 16 meeting of the Sunset Subcommittee of the Legislative Commission, highlighted the Nevada State Board of Dental Examiners’ lack of an independent committee to review outcomes of investigations into misconduct allegations.

The review process complaint was just one of several issues investigated by the auditors, who also found the board lacked “an effective process for accurately determining the amount of investigative costs” to dental professionals under scrutiny.

“The Board overcharged licensees for investigative costs in almost half of the investigations in the last two years, including several over $1,000,” the report found.

During those two years, licensees were overcharged by about $28,000 total and undercharged by more than $41,000, the report found.

When a member of the public files a written complaint and it’s verified, a licensed dental professional — referred to as a disciplinary screening officer (DSO) — acts as an investigator, reviewing the case and evidence.

If the investigator finds no evidence of wrongdoing, the case is remanded. If a majority of the evidence points to a violation, board representatives and legal counsel try to reach an agreement with the dental practitioner without having to resort to a full board hearing.

“Investigation results are not reviewed and sufficient guidance has not been developed to provide additional assurance that DSO conclusions and recommendations are based on sufficient evidence. Without a review process, variations in DSO decisions are more likely to occur,” the report found.

The auditors also found certain screening officers are more likely to recommend enforcement action, which could bias the investigative process.

Review processes are standard in medical boards inside and outside of the state, audit supervisor Shannon Ryan of the Legislative Counsel Bureau told the subcommittee.

“A review process would help verify conclusions and recommendations are based on clear and sufficient evidence. Without a review process, there is an increased risk that investigations could result in licensees being treated too harshly or lightly,” the report found.

In comparison, the Nevada State Board of Medical Examiners by statute requires multiple reviews, including one completed by a committee consisting of members of the full board.

Dental board legal representative John A. Hunt said the organization doesn’t oppose having a committee to review investigators’ discoveries but did not want to implement such a committee without explicitly written instructions in a statute.

“Once it’s in the statute, the board will obviously apply it,” Hunt said.

Hunt also argued professionals weren’t overcharged because they had signed settlement paperwork agreeing to the costs. He added that the board has since changed its paperwork to clarify a disputed fee.

Multiple complainants before the subcommittee critiqued the dental board’s settlement and hearing processes. They argued the system creates a situation in which the licensee either accepts a settlement agreement or risks paying much more if found at fault during a final board hearing.

“That’s where the allegation of extortion comes in,” subcommittee member Assemblyman Glenn E. Trowbridge said. “Either pay me now or we’ll look into it deeper and you’ll pay me more.”

The board also let several licensees pay fines through charitable contributions to community organizations, which was found to be disallowed under state law.

The board rejected two of 14 suggestions by the auditors regarding implementing an independent review process and returning the funds called overcharges by the audit.

It is expected to submit a 60-day plan for corrective action by Aug. 18 and will return to the subcommittee in six months for a status update, according to the report and Hunt.

Assemblyman Chris Edwards said he believes an independent mediator not selected by the board could help settle cases at a lower overall cost.

Edwards also wondered aloud during the subcommittee meeting about the charitable contributions violation and if it would require the funds be returned.

Licensees who had hired unlicensed workers were allowed to pay about $140,000 to charitable organizations including nonprofit oral health program Future Smiles.

Rather than having to pay back each customer treated by unlicensed workers, the board allowed the practitioners to donate the money as acts of community service, Hunt said.

It was not definitively determined during the subcommittee meeting whether the donations would have to be returned, which could cause issues for the charitable organizations involved.

A legal adviser to the subcommittee said a practitioner who paid out the money would have to file a legal claim.

Hunt said the donations were suggested by the practitioners.