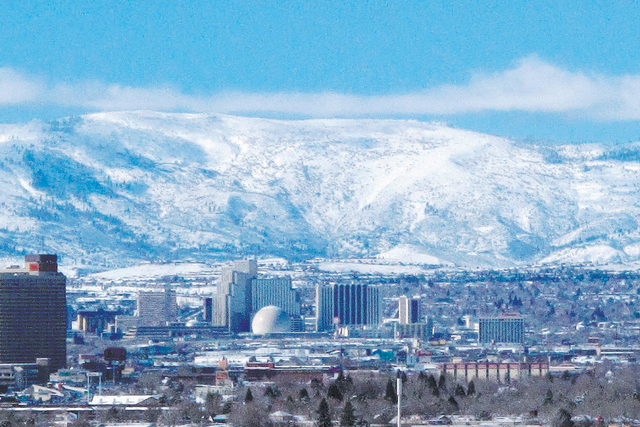 The snow-covered foothills of the Sierra's eastern front are seen beyond the Reno skyline, Feb. 1, 2016. (Scott Sonner/AP)

RENO — An avalanche has buried the crest of the main mountain highway between Reno and Lake Tahoe beneath about 20 feet of snow and eastbound U.S. Interstate 80 has been closed west of Reno, but there were no immediate reports Tuesday of injuries as the latest in a series of winter storms pounded the Sierra Nevada range and much of northern Nevada.

California transportation officials were responding to a number of collisions on I-80 near Donner Pass west of Truckee California where whiteout conditions were reported earlier in the day.

Nevada Highway Patrol Trooper Dan Gordon said authorities do not believe any motorists or vehicles were trapped in the avalanche near the crest of the Mount Rose Highway. Authorities provided no guidance on when the road would reopen.

More than 3 feet of new snow fell in the mountains in the Tahoe area in the most recent storm, and the Mt. Rose ski resort has had a record 50 feet of snow December. A winter storm warning was in place for much of the Sierra Nevada until 4:30 a.m. Wednesday.

A mix of rain and snow snarled traffic during the Tuesday morning commute in the Reno-Tahoe area, where cars spinning out clogged traffic more for more than a mile on U.S. Highway 395.

The Mount Rose Highway was closed after the avalanche was reported about 9:15 p.m. Monday.

Gordon said driving conditions remained treacherous elsewhere in higher elevations, and vehicles were required to have chains or snow tires to travel all mountain passes including Interstate 80.

Two motorists who drove around barriers near the campus of the University of Nevada, Reno, had to be rescued after their vehicles stalled in high water, said police Officer Tim Broadway.

A flood warning and winter weather advisory were in effect in the Reno-Tahoe area, where up to 3 inches of slushy snow was expected.

The new round of rain and heavy snow is the latest in a series of record-breaking winter storms in the same area that saw flooding last week.

Officials said that storm caused millions of dollars in damages, on top of nearly $15 million in damages from winter storms in January that led President Donald Trump to issue a disaster declaration.