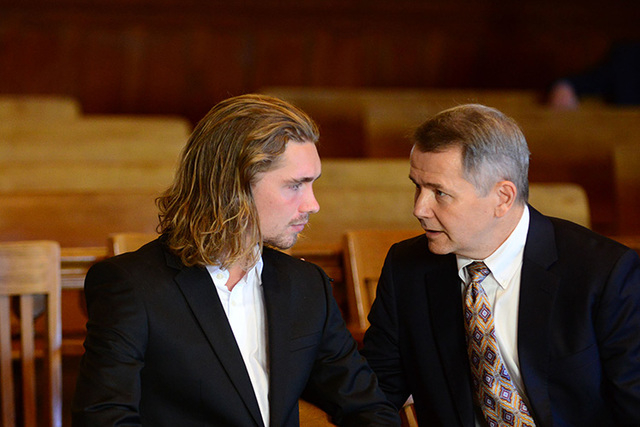 Jesse Helt, left, listens to his attorney Whitney Boise during his sentencing hearing at the Polk County Courthouse in Dallas, Ore., Tuesday, Oct. 7, 2014. Helt, who accompanied Miley Cyrus to the MTV Video Music Awards and read her acceptance speech, was sentenced to six months in jail for violating the terms of his probation in Oregon. (AP Photo/Statesman-Journal, Danielle Peterson)

The country singer will recognize Michael Landsberry at a concert Saturday night in Incline Village by presenting a plaque and check to his widow, Sharon.

The 45-year-old ex-Marine tried to talk the shooter into turning over the handgun before the youth shot him in the chest Oct. 21 at a middle school in the Reno suburb of Sparks. The student wounded two classmates before taking his life.

Cyrus says Landsberry represents the courage of the Vietnam veteran honored in his patriotic song, “Some Gave All.”

Cyrus and his father, Ronald, made similar presentations to honor unsung American heroes for more than a decade, and this will mark the first time he has done so since his father’s 2006 death.