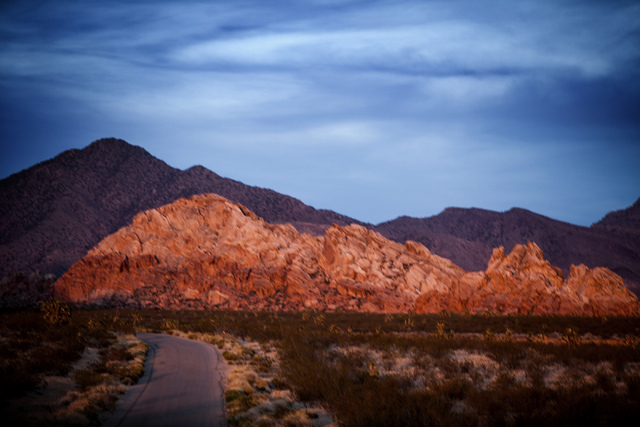 The Gold Butte area is seen at sundown on Thursday, May 22, 2014. The Gold Butte Region, administered by the BLM and the U.S. National Park Service, is about 2 1/2 hours east of Las Vegas near the Overton Arm of Lake Mead. (Jeff Scheid/Las Vegas Review-Journal) 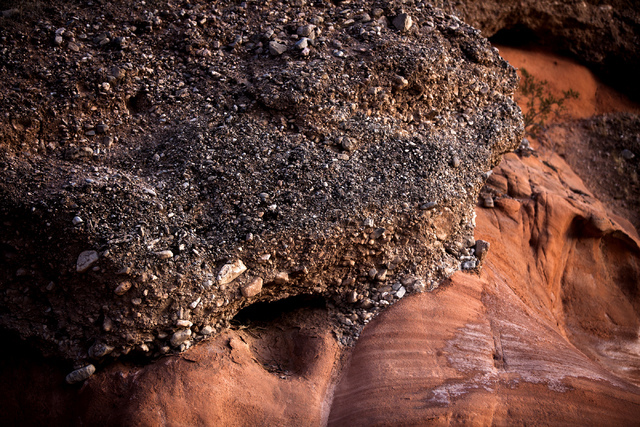 Rock formations as seen Thursday, May 22, 2014 in the Gold Butte area. The Gold Butte Region, administered by the BLM and the U.S. National Park Service, is about 2 1/2 hours east of Las Vegas. (Jeff Scheid/Las Vegas Review-Journal) 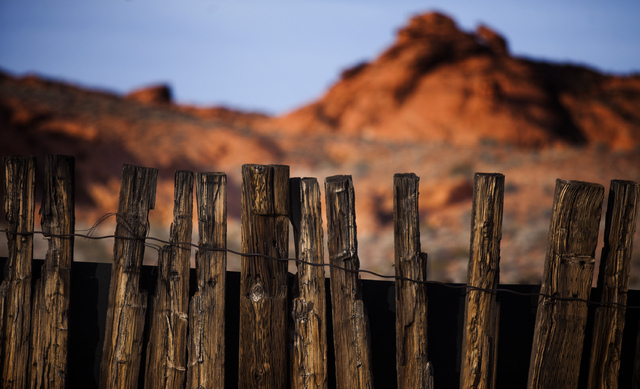 A cattle corral near Little Finland, also known as Hobgoblin's Playground and Devil's Fire, is shown Thursday, May 22, 2014 in the Gold Butte area, about 2 1/2 hours east of Las Vegas. (Jeff Scheid/Las Vegas Review-Journal)

Two years after its hasty retreat from the Gold Butte area, the federal government is moving back into the remote corner of northeastern Clark County for the first time since its confrontation with the Bundy family in 2014.

BLM spokesman Craig Leff said Friday that the BLM’s decision to return came after Southern Nevada residents said they wanted the agency back out there managing the resources.

“Our local folks had been having meetings with local representatives and the community,” Leff said. “It was time.”

BLM employees have not conducted field work in the Gold Butte area, 110 miles northeast of Las Vegas, since early 2014 “due to safety and security concerns,” BLM officials wrote in a release Friday.

Those concerns stemmed from the armed standoff with Cliven Bundy, his sons and their supporters, including militia and patriot groups that had gathered on the family’s Bunkerville ranch in April 2014.

BLM Director Neil Kornze and the agency’s state director, John Ruhs, toured Gold Butte on Thursday with Clark County Commissioner Marilyn Kirkpatrick and Metro Capt. James LaRochelle. The visit was not announced until after it occurred.

BLM archaeologists, law enforcement officers and local BLM officials have also visited the area in the past month, the BLM wrote in the release.

The BLM plans to increase its presence at Gold Butte in the coming months.

“This area is a real treasure,” Kornze said in Friday’s statement. “We look forward to working with our local partners to restart the many important efforts we had underway.”

Those efforts include assessing the damage to cultural heritage sites, repairing communications infrastructure, maintaining roads and establishing route signs to help guide visitors. They also plan to work with nearby communities to address the spread of weeds and reduce the threat of wildfires.

Conservationists are happy to see the BLM back on the job in Gold Butte.

The area has suffered a great deal of damage from vandals and off-road vehicles since 2014, according to the Friends of Gold Butte, a local nonprofit group whose members monitor the area and advocate on its behalf.

“People creating their own roads by driving into the pristine desert habitat is a huge problem,” said Jaina Moan, the group’s executive director. “We’re excited to partner with (the BLM) on the stewardship of the land.”

“It’s about time,” said Rob Mrowka, a senior scientist for the Tucson, Arizona-based Center for Biological Diversity. “I think the BLM fears were overblown once the militia left. It’s going to be good to have the sheriff back in town out there.”

Mrowka’s organization is part of a coalition of nine environmental groups that have called on the BLM to finish what it started two years ago: the roundup and removal of Bundy’s cattle from public land as ordered by a federal judge.

But Mrowka said he is willing to “leave talk of a roundup” for another day. “I would be satisfied if they just did their normal protect-the-resource job,” he said.

A year ago, Cliven Bundy told the Review-Journal that things were pleasantly quiet in the Gold Butte area without federal workers around. “We’ve gotten along just fine without the BLM,” he said. “We’re done with them, and we’re not going to let them come back.”

Today Bundy finds himself in federal custody awaiting trial on charges in connection with the 2014 standoff.

Though BLM officials did not cite it as a reason, their return to Gold Butte comes four months after Bundy was indicted with four of his adult sons and 14 others.

Bundy’s wife, Carol, who continues to oversee the ranch while her family members await trial, could not be reached for comment Friday.

Some have speculated that the increased federal presence could be a precursor to another government cattle roundup, a presidential declaration establishing Gold Butte as a national monument, or both.

Advocates have called for permanent protection of the remote, 350,000-acre expanse, which is filled with ancient rock art, sweeping desert vistas and twisted pastel-colored sandstone formations.

Nevada’s congressional delegation remains divided on the proposed monument, so Sen. Harry Reid has been pressing President Barack Obama to protect Gold Butte using his authority under the Antiquities Act.

Reid plans to continue that push until he and Obama leave office, said Kristen Orthman, spokeswoman for the Democratic senator from Searchlight.

Moan, Mrowka and other advocates see the next six months as their best — if not last — chance to win monument protection for Gold Butte.

But Moan sees no connection between that campaign and the BLM’s announcement on Friday.

“It was always their plan to return,” she said of bureau officials. “They’re just doing their job.”