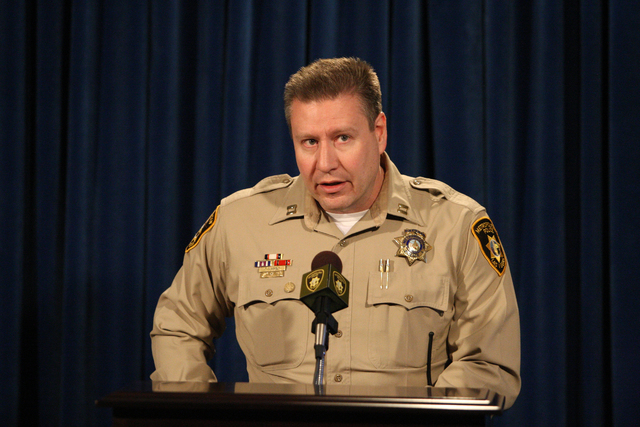 Capt. Chris Tomaino from the Las Vegas Metropolitan Police Department discusses domestic violence statistics during a press conference to ask the community for it's help during the "Season of Peace" which the department was selected to participate in. Wednesday, May 20, 2015 (Michael Quine/Las Vegas Review-Journal) Follow Michael Quine on Twitter @Vegas88s

Clark County officials expanded their new program that allows people who commit certain minor offenses to go the civil route and receive a fine of up to $1,000 rather than being booked in the detention center.

The “civil diversion program” was rolled out earlier this summer with the opening of a new off-Strip court facility, which allows the Metropolitan Police Department to handle offenses such as peddling items illegally in the resort corridor outside the criminal justice system.

With the Clark County Commission’s unanimous vote Tuesday, people picked up by police for misdemeanor violations of peddling items without a license, selling alcohol and obstructing public sidewalks, can now go the civil route, too.

The violators are fined and their items are impounded, but it doesn’t appear on their record.

The aim is to “unclog the courts, unclog the jails,” said Capt. Chris Tomaino, bureau commander for Metro’s Convention Center Area Command, the substation in charge of the resort corridor.

During the program’s first month, Assistant Clark County Manager Jeff Wells estimated that 60 to 70 cases took the civil diversion path, but because officers were targeting those vendors only during certain windows of time, that’s likely changed since the program ramped up to 24/7.

But that doesn’t necessarily mean one should expect the number of such cases to soar, because the goal is to reduce the number of civil infractions and “get folks to stop this activity along the Strip,” Wells said.

“We’re learning and continuing to evaluate it,” Wells said.

Amanda Schweisthal, public affairs manager for the Retail Association of Nevada, told commissioners she supports the measure to allow Metro to “clean up the streets.”

“We definitely appreciate the ability for Metro to make sure that the only people selling on the Strip are those with licenses,” Schweisthal said.