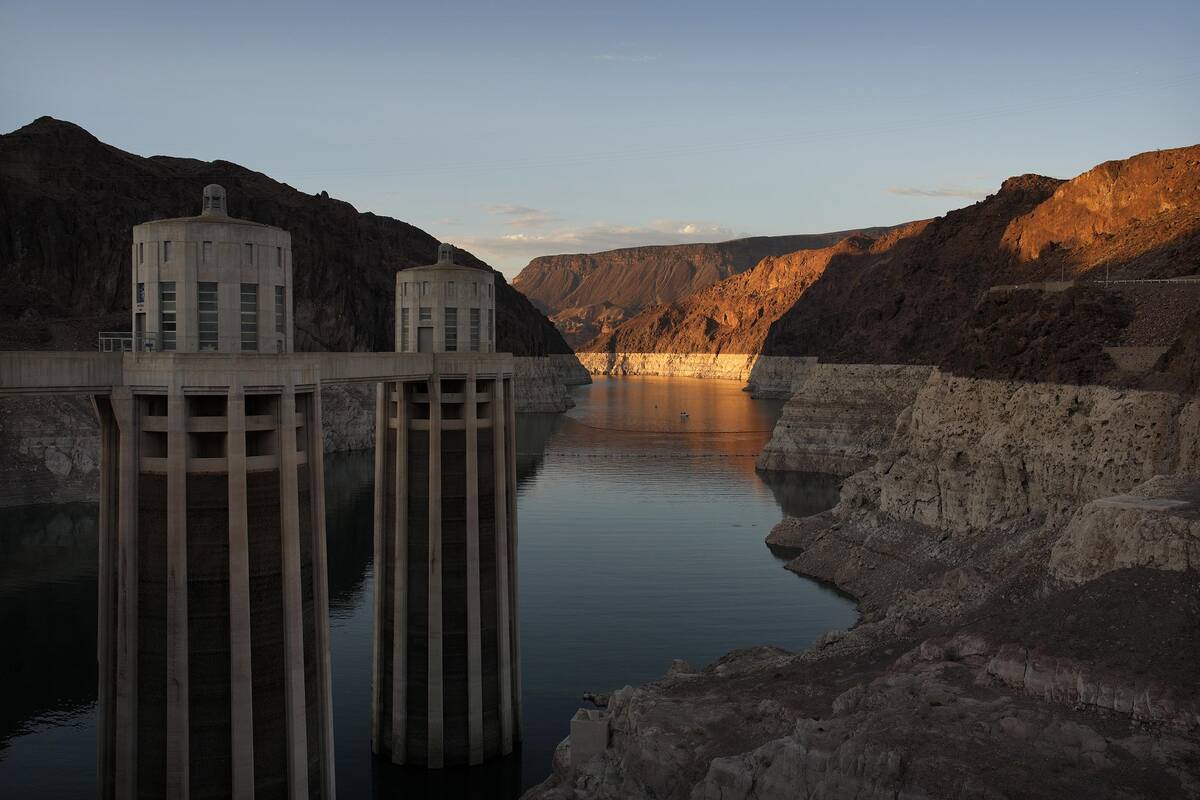 FILE - A bathtub ring of light minerals shows the high water line of Lake Mead near water intakes on the Arizona side of Hoover Dam at the Lake Mead National Recreation Area Sunday, June 26, 2022, near Boulder City, Nev. The U.S. Interior Department announced, Friday, Oct. 28, 2022, that it will consider revising a set of guidelines for operating two major dams on the Colorado River in the first sign of what could lead to federal action to protect the shrinking reservoirs behind them. (AP Photo/John Locher, File) 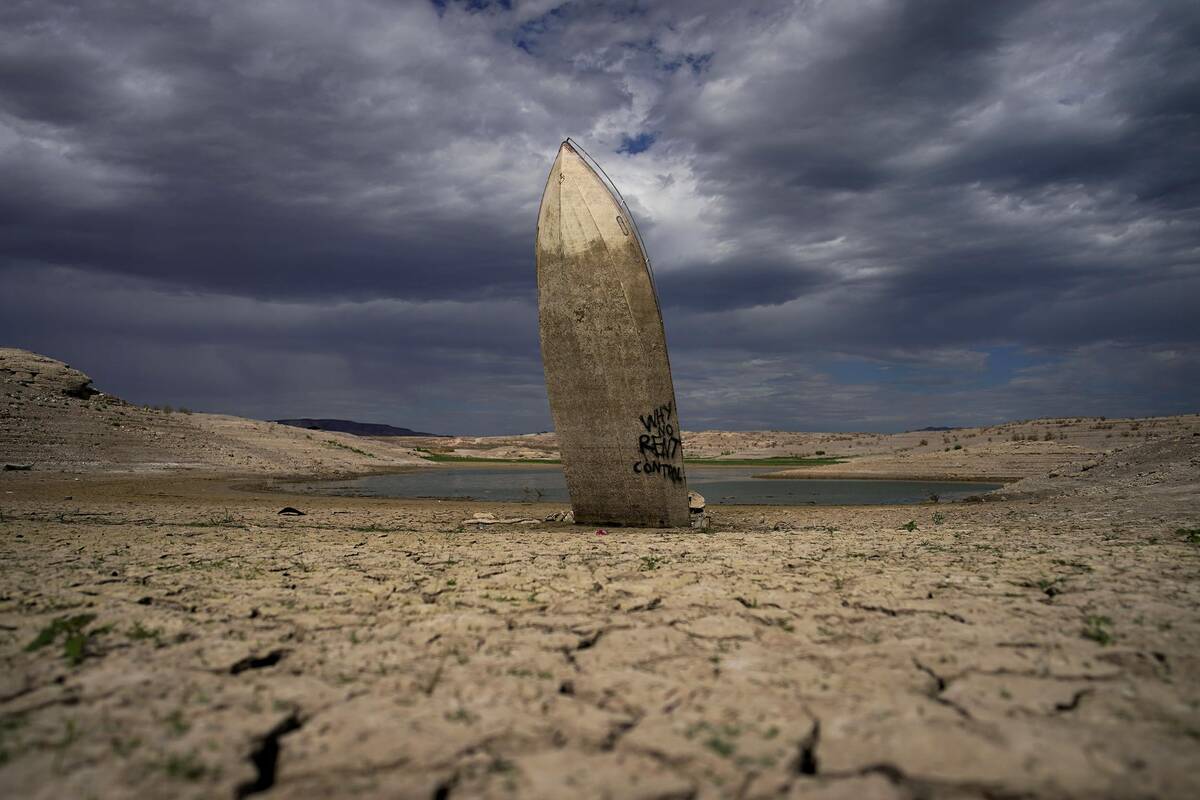 FILE - A formerly sunken boat stands upright into the air with its stern buried in the mud along the shoreline of Lake Mead at the Lake Mead National Recreation Area on June 22, 2022, near Boulder City, Nev. The U.S. Interior Department announced, Friday, Oct. 28, 2022, that it will consider revising a set of guidelines for operating two major dams on the Colorado River in the first sign of what could lead to federal action to protect the shrinking reservoirs behind them. (AP Photo/John Locher, File) 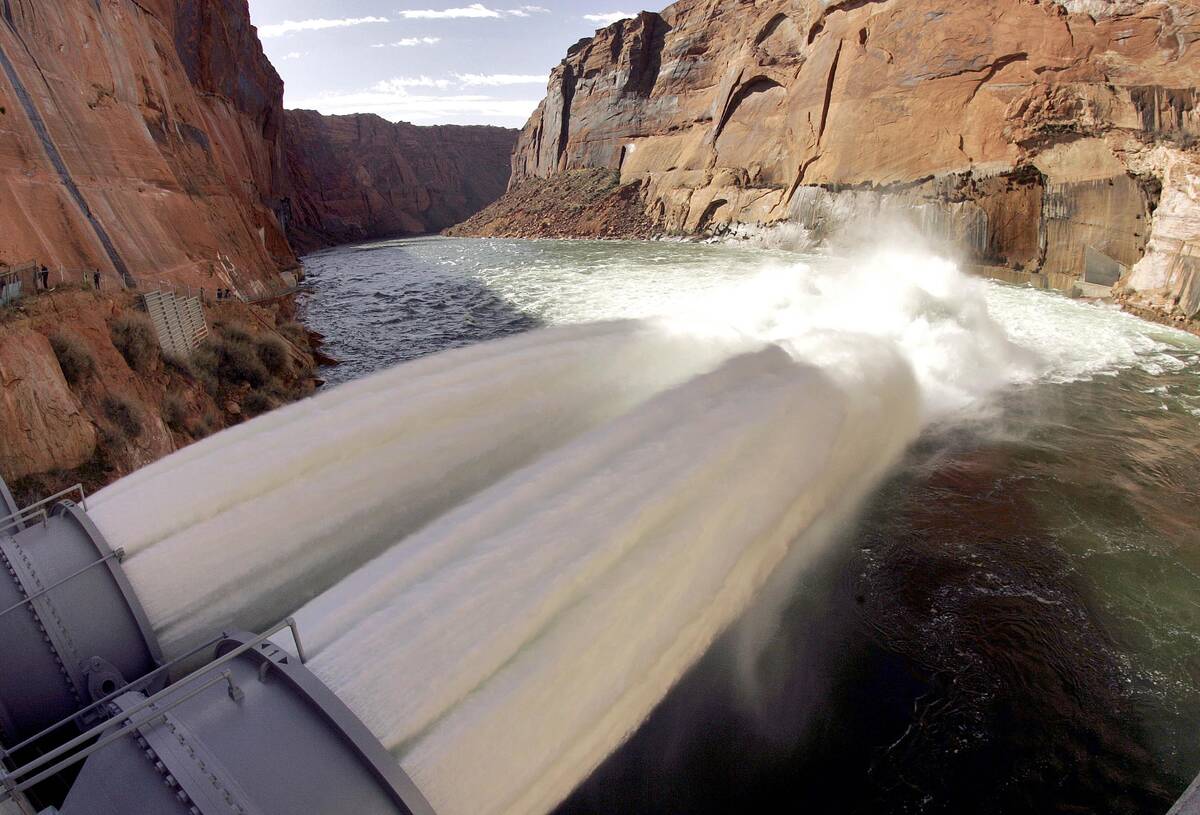 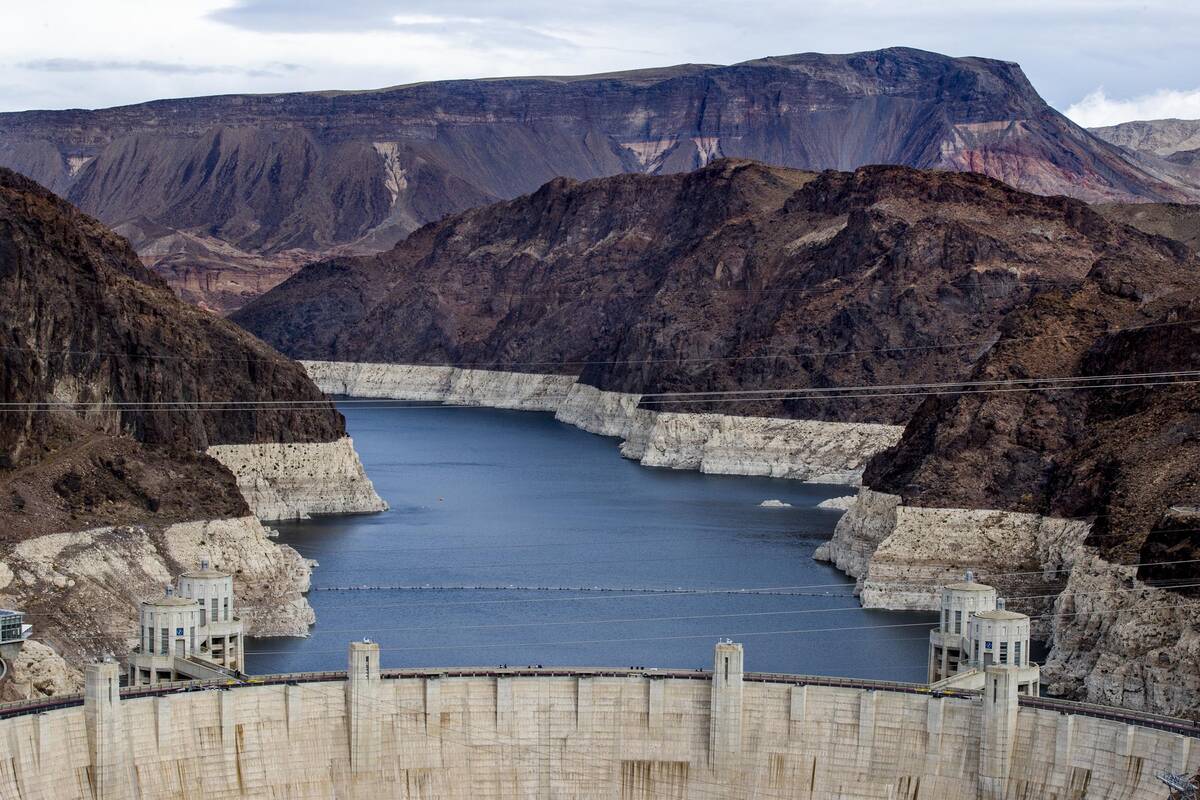 With the negotiations between states at an impasse over how to address the dwindling Colorado River, the Interior Department announced Friday that it is taking its first step toward potentially revising the current guidelines for the river’s two major dams.

The agency is considering three proposals that would modify the current guidelines it says are needed in order to keep Lake Mead and Lake Powell from dropping to points that would threaten their abilities to generate hydropower or deliver water downstream.

“We are taking immediate steps now to revise the operating guidelines to protect the Colorado River System and stabilize rapidly declining reservoir storage elevations,” Reclamation Commissioner Camille Calimlim Touton said in a statement. “Today’s action brings new ideas and necessary measures to the table as we consider alternatives to revise operations to better protect Colorado River System in the near term while we also continue to develop long-term, sustainable plans that reflect the climate-driven realities facing the Colorado River Basin.”

The announcement comes four months after Touton first tasked the seven states that draw water from the Colorado to come up with a plan to drastically cut back water use along the drought-stricken and chronically overused river that supplies water to nearly 40 million people across the West.

Those states failed to meet a mid-August deadline that Touton laid out but negotiations have continued since. But with no deal in place, the federal government looks prepared to finally step in — something that some water managers have been waiting to hear.

The proposed revisions would modify a set of guidelines approved in 2007 and 2019 that were meant to provide more clarity to states about their water supplies. Those guidelines set mandatory cuts for the lower basin states of Nevada, Arizona and California based on projected elevations at Lake Mead.

One of the three options would allow the Bureau of Reclamation to take unilateral action, which Touton had threatened was on the table during a U.S. Senate hearing in June when she laid out the need to cut water use along river by as much as 30 percent starting next year.

The other two options involved allowing the states, tribes and non-governmental organizations to come up with a plan, or do nothing.

The public has until Dec. 20 to weigh in on the options. The Bureau of Reclamation expects to publish a draft of the proposal by spring of 2023, and a decision could come by that summer.

“The Interior Department continues to pursue a collaborative and consensus-based approach to addressing the drought crisis afflicting the West. At the same time, we are committed to taking prompt and decisive action necessary to protect the Colorado River System and all those who depend on it,” Interior Secretary Deb Haaland said in a statement. “Revising the current interim operating guidelines for Glen Canyon and Hoover Dams represents one of many critical Departmental efforts underway to better protect the System in light of rapidly changing conditions in the Basin.”

Cutting back on water flow

Reclamation said that it may need to reduce downstream releases from Lake Powell’s Glen Canyon Dam to ensure it can operate as intended. That would, in turn, affect water levels at Lake Mead, and the agency wrote that would also need to reduce downstream releases from Hoover Dam to California, Arizona and Mexico “in order to protect Hoover Dam operations, system integrity, and public health and safety.”

The most recent projections show a 10 percent chance that water levels at Lake Powell fall below 3,490 feet elevation next year — a point where the dam would no longer be able to generate hydropower.

John Entsminger, general manager of the Southern Nevada Water Authority, said Interior’s announcement indicates that the federal government is planning for states to make voluntary cuts for next year while planning to implement the guideline revisions for the following year. But he said he hopes Friday’s announcement can stimulate progress in the negotiations between the basin states.

“Far and away, the best way to go about this would be the states coming up with a consensus alternative, submit that, and hopefully have that emerge as the preferred alternative,” he said.

The bureau announced in mid-October a process to pay farmers and cities in Arizona, California and Nevada to conserve Colorado River water, paying up to $400 per acre foot of water left in Lake Mead. One acre foot of water is roughly 326,000 gallons. Thus far, only the Gila River Indian Community in Arizona has said publicly that it would take the federal government up on that offer by planning to conserve up to 125,000 acre feet of water on its reservations.

Last month, California water agencies that pull from the Colorado River said in a letter that they are prepared to conserve 400,000 acre-feet annually starting next year and running through 2026, when the current agreements expire. But that proposal from the biggest group of Colorado River water users still fell far short of what the federal government says is needed to protect critical levels at Lake Mead and Lake Powell.

Kyle Roerink, executive director of the Great Basin Water Network, said Interior’s announcement shows that the federal government will not let the states call its bluff any longer.

“It realizes that the existing 2026 deadline is too far in the distance for anything meaningful to take place,” Roerink said. “The system is crashing before our eyes and if we wait until 2026, we’re going to be in trouble.”