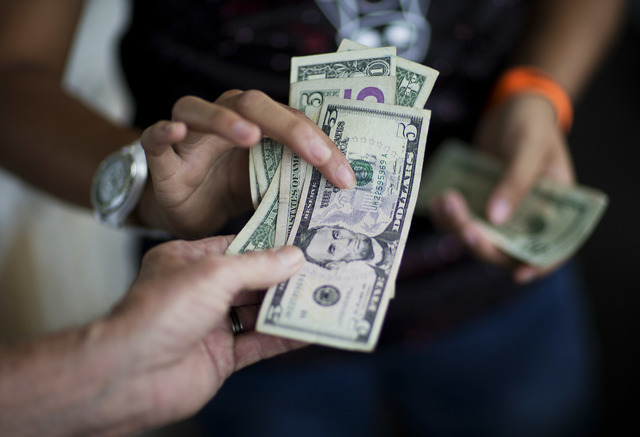 The Census Bureau decision to drop questions about marriage from its survey created a flurry of protests from researchers, academics and others. Now the plan is to keep those questions.

Nevada is one of just eight states that saw a slight increase in income inequality from 2014 to 2015, according to new census data that raise questions about the evenness of the state’s economic recovery.

The state’s increase in income inequality, as measured by a mathematical formula known as the Gini Index, was not steep. But it was statistically significant, according to data from the Census Bureau’s American Community Survey (ACS).

The index, which ranges between zero and 1 — with 0 representing perfect equality and 1 representing total inequality — edged upward for Nevada as a whole from 0.43 in 2014 to 0.45 last year. It was up more sharply for Clark County, rising from 0.44 to 0.6.

The ACS data, which divide households into fifths – or quintiles – shows that all groups in Nevada earned more in 2015 than they did in 2014.

Even with the increase in Nevada’s index, it remains below the U.S. national Gini figure of 0.48, which is high among rich democratic nations, according to Lane Kenworthy, an expert in income inequality at the University of California, San Diego.

“(A figure of) 0.4 means 40 percent of all the money would have to be distributed from higher households to lower income ones” to create a perfectly even distribution of wealth, said the sociology professor.

The new data come just two days after the Census Bureau reported unexpectedly strong growth in median household income and a decline in the share of Americans living below the poverty line to 13.5 percent. That report indicated that the economy that is finally starting to benefit a wider range of Americans after the recovery from recession began.

Nevada is not missing out on that recovery. The state’s poverty level dipped by about 0.5 percent in 2015 to 14.7 percent, which means an estimated 8,487 Nevadans were no longer below the federal guideline which is $24,300 for a family of four. (The ACS data also calculated the national poverty rate, at 14.7 percent.) In Clark County, the decline was about 0.1 percent to 15.1 percent, or 5,239 individuals. Yet, the poverty level for both state and county have not recovered to 2007 levels, slightly more than 10 percent.

Median household income in the state, meanwhile, increased from $51,509 in 2014 to $52,431 in 2015, after adjusting for inflation. White, Hispanic, African-American and Asian households all saw increases.

But the new ACS data paint a more nuanced portrait of the recovery, showing the growth in wages has not yet begun to reverse an income inequality gap that has been growing for decades.

Only one state, Connecticut, registered a decline in its Gini Index, according to the data, while eight states – Nevada, Florida, Illinois, Indiana, Kentucky, Michigan, Nebraska and New Jersey – experienced increases. Among them, Nevada and Nebraska saw the biggest increase of 0.012. With all other states relatively flat, that resulted in a national increase of 0.0013 within the margin of error of 0.0006.

“What’s happened is for the last decade or so wages have not grown. That’s going to contribute to income inequality,” he said.

Income used in the ACS data is pre-tax and includes wages and salaries, property income, Social Security, unemployment, worker’s compensation, public and private retirement sources and child support. It does not include Medicare, Medicaid, food stamps and profit from the sale of assets or capital gains.