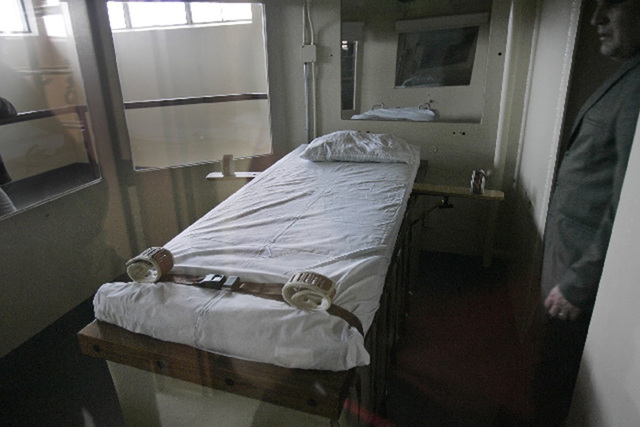 The execution chamber in Nevada State Prison in Carson City is shown in 2005. (Las Vegas Review-Journal)

CARSON CITY — Nevada prison officials said Friday the state will have to explore its options to carry out executions after it received no bids from pharmaceutical companies to supply drugs for lethal injections.

The state issued 247 requests for proposals on Sept. 2 after its stockpile of at least one drug used in executions had expired. Not one response was received.

“We are confident the Purchasing Division solicited thoroughly for vendors,” James Dzurenda, director of the Nevada Department of Corrections, said in a statement.

“Now we will work closely with the attorney general, the governor and the Legislature to examine our options and decide the best course of action moving forward.”

Dzurenda in August told the state Board of Prison Commissioners chaired by Gov. Brian Sandoval that one of two drugs needed to execute a condemned inmate by lethal injection has expired and the drug company Pfizer refused to provide more supplies.

Nevada has used the drugs midazolam and hydromorphone to administer a lethal injection. Both are manufactured by Pfizer.

“Pfizer makes its products to enhance and save the lives of the patients we serve,” the company said in a statement issued earlier this year. “Consistent with these values, Pfizer strongly objects to the use of its products as lethal injections for capital punishment.”

The Nevada Legislature in the 2015 session approved spending $858,000 to build a new execution chamber at Ely State Prison, to replace the chamber in the now-closed Nevada State Prison in Carson City.

Officials have said that project is scheduled to be completed by Nov. 1 and the space will be used for storage and as an attorney-inmate meeting area if no executions are scheduled to go forward.

There are 81 inmates on Nevada’s death row. No executions are on the immediate horizon. Without the supply of drugs, they could not be carried out even if one is ordered.

Under state law, Nevada is required to use lethal injection for executions. Changing the method Nevada uses to carry out executions would require approval by the state Legislature.

It’s unknown what “options” Nevada officials might consider if drugs cannot be found.

Nevada is not alone in its inability to acquire drugs used to kill condemned inmates. In a recent article, Jennifer Horne with the Council of State Governments said dozens of states face the same dilemma. Some states are changing their protocols to use different drugs and some are trying to obtain drugs from foreign suppliers.

“Many states will have to change their method of execution, which means regulatory changes that have to be approved and lengthy court challenges,” Richard Dieter, executive director of the Death Penalty Information Center, told Horne. “In many states, this could take months, if not years, delaying executions.”

The last execution occurred at the Nevada State Prison on April 26, 2006, when Daryl Mack was put to death. Mack was executed for the rape and murder of a Reno woman, Betty Jane May, in 1988.